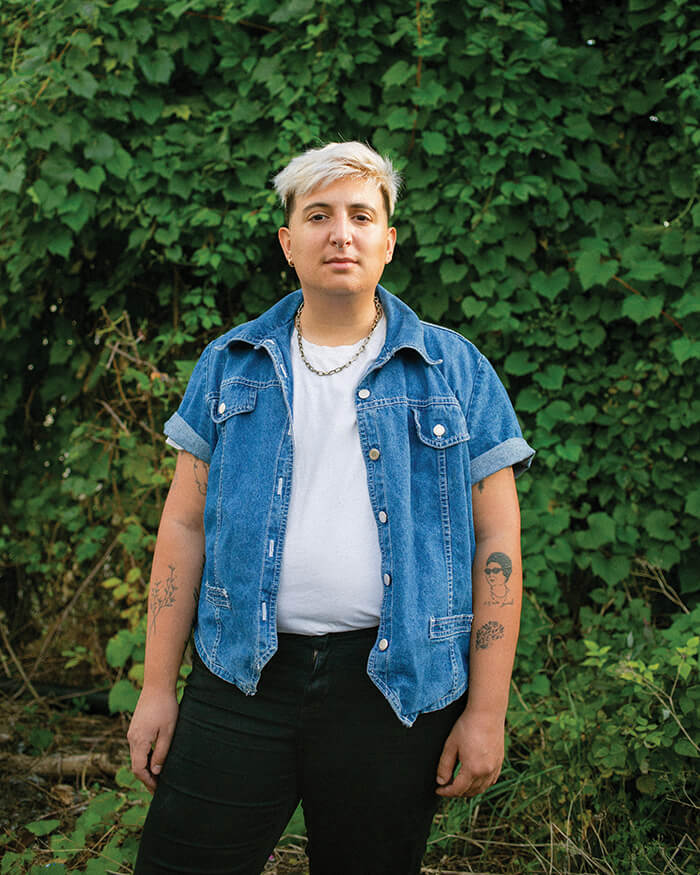 In the opening letter of their debut poetry collection, knot body, Eli Tareq El Bechelany-Lynch writes: “The days get brighter but somehow I don’t. A dilemma, right? I thought I was swayed by the light, moods lifting as the clouds lift, yet this pain is fingers deep.”

El Bechelany-Lynch’s writing is at once an intimate inventory and a daring confession of what it means to listen to one’s body—all the ways that capitalism and ableism marginalize and dismiss queerness, chronic pain, invisible disability, and race. Their collection hugs the line between non-fiction and poetry. “I wanted to move past a disabled body as one that is to be understood, and rather as one that can be experienced—like a person who can be experienced,” they say.

Many poems in knot body take the form of letters addressed to “Dear friends, lovers, and in-betweens,” conveying an intimacy which urges us to consider the specificity of their pain, but also to examine our own relationships with our bodies. El Bechelany-Lynch began writing to the people around them as a way of thinking about their queer friendships and as a way of creating intimacy, but the poems have found a wider resonance.

“A lot of my work and anything that I do is really trying to reach other POC, any BIPOC who are interested in reading my work, like other people with chronic pain, other disabled people,” says El Bechelany-Lynch. A few people who had chronic pain didn’t realize they did—until they read knot body—and messaged El Bechelany-Lynch to share words of appreciation. “It was so touching. It was just really nice to be like, ‘Okay cool, it can function that way too, it can be a way to validate someone’s experience’ … that’s probably one of the best things I could hear.”

Though knot body offers consolation, the author says it was not easy to write. The process was draining and breaks were necessary. “Writing about chronic pain is difficult because it brings me to a space where I’m recognizing my pain and I think a lot of the ways people cope with chronic pain is that your body does the work of dissociating,” says El Bechelany-Lynch. “When I was writing about it specifically, I was like, ‘Oh yeah, my neck pain, my leg hurts’—all these ways I was being constantly confronted with the physicality of my body.”

While knot body (released in fall 2020 with Metatron Press) is El Bechelany-Lynch’s first book to be published, their second book of poems, The Good Arabs (forthcoming with Metonymy Press in fall 2021) has been six years in the making. The Good Arabs tackles the complexity of the Arab diaspora and its complicated colonial histories. El Bechelany-Lynch was born in Montreal and has lived there for almost a decade, but spent a part of their childhood in Lebanon.

Although The Good Arabs differs formally from knot body’s hybrid epistolary poems, poetry is still the ultimate vehicle for all of El Bechelany-Lynch’s work. “I wouldn’t say it’s standard or traditional poetry, because I don’t know that I write that, but it’s more recognizable as poetry,” they say. “I think poetry allows for complication … I feel like with an essay I would be able to be like, ‘This happened and this happened and, oh yes, we contend with this.’ But what does it mean to intersplice everything in a poem where everything is juxtaposed?”