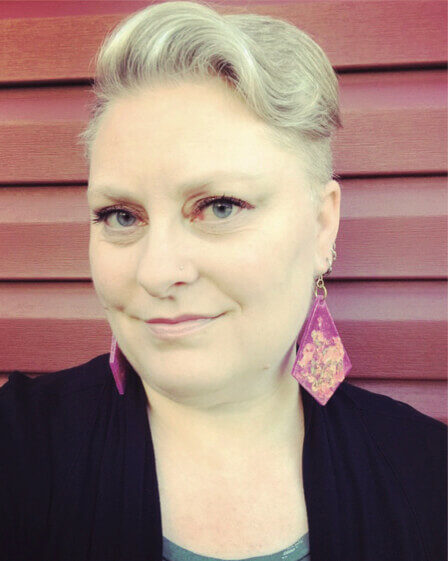 “Bent out of joint / in order to hold every-thing together. Won’t snap, won’t dissolve in an acid bath.” These are the opening lines of Self-Portrait as Paperclip, from Fredericton-based writer Triny Finlay’s third book, Myself A Paperclip, in which she transforms an inconspicuous office article into a clever metaphor for those attempting to hold everything together. The queer writer’s first book-length long poem was published in October 2021 with Goose Lane Editions.

The collection details experiences with stigma surrounding mental illness, trauma, treatments, and life in the psych ward. With section titles such as “You don’t want what I’ve got” and “Adjusting the Psychotropics,” Finlay’s words serve as a call to action for mental illness and its treatments to be normalized, and for the needs of those living with mental illness to be met with more compassion.

The title Myself A Paperclip was conceived from her poem Self-Portrait as Paperclip, although the author admits she originally had another title in mind. “I had all these lists, dozens of possible titles, and the one that I liked best was ‘Nothing like a mad woman’ from [the song “mad woman” on] Taylor Swift’s folklore album, which I was obsessively listening to,” she laughs. Due to foreseeable copyright issues, Finlay had to abandon this option.

“I wrote [Self-Portrait as Paperclip] during a really fraught period of my life where I was struggling with a lot of changes in my life. I was going through a divorce, I was coming out more publicly as queer, I was just dealing with a lot,” she says. “So I went back to that poem … as a touchstone for the whole book and realized it said everything I wanted the book to say about trauma, mental illness, and treatment.”

The section of her book titled “You don’t want what I’ve got,” which was previously published as a chapbook by Junction Books in 2018, became the impetus for the collection. This section initially zoned in on unrequited love, with the author ultimately realizing that it was time to shift focus.

“I started to ask myself: why am I writing about unrequited love? What is it that I need to say about that?” It occurred to her that the parts of her “novel-esque” long poem involving the main character’s obsessions and compulsive behaviours arising from unrequited love were what interested her the most. Trashing the bulk of the manuscript she’d been working on for over 10 years, Finlay took another swing at the project. “I wanted to write about how a person loses their mind, and how people are treated when they lose their mind…” she explains.

She also found it important to incorporate humour into the collection. In the section titled “Psych Ward Types: a List,” she candidly reflects on her stays in the psych ward, bringing to life a list of characters who offer comedic consolation to a situation that Finlay recounts as absurd.

“You know, people with mental illness also run the gamut of emotional experience, so there can be humour.”

The writer hopes that her book has the potential to shine a light on the nuances of living with mental illness. From stunned silences to voiced concerns from loved ones regarding medication, Myself A Paperclip showcases ample instances of stigma-fueled behaviours and actions that need to be continually addressed.

“For me, one of the major obstacles when we bring mental health issues to the table is that often the people who are talking about it, writing about it, treating it, legislating it, trying to accommodate it in the workplace, are the people who are the least affected by it personally,” she says. “I think people need to check their beliefs. I think they need to check their values, change their behaviour, offer actual compassionate support…”

Finlay encourages writers to derive inspiration from their own lives, especially individuals belonging to marginalized groups. “I think the writing that comes from lived experience, especially of conventionally excluded groups—so communities who haven’t always been given the right to speak or the right to be heard—is often the strongest work,” she says. “For me, from an ethical standpoint, it is really important to consider the lived experience of the people who are going through these kinds of struggles.”