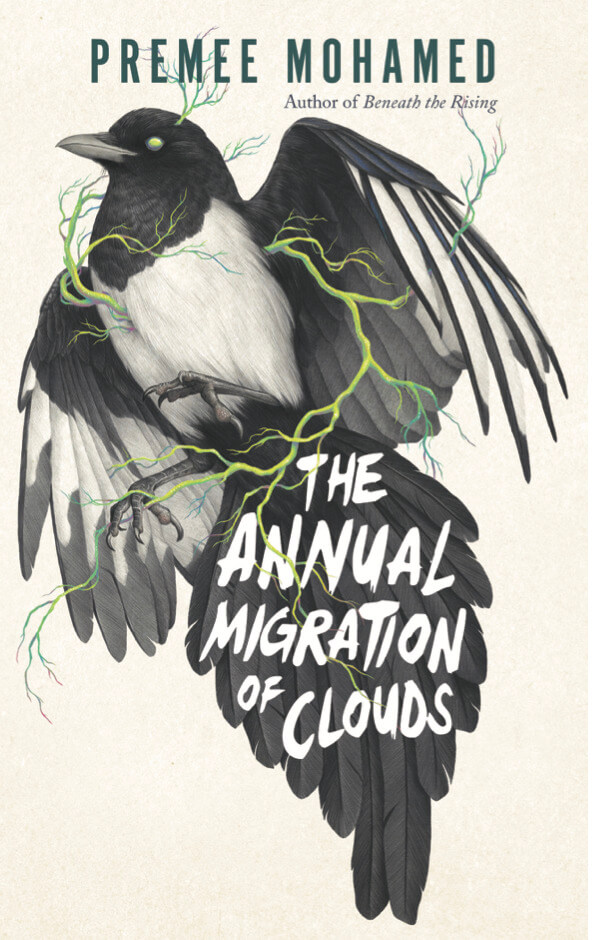 In These Lifeless Things, by Edmonton writer Premee Mohamed, a character looks at her partner in a post-apocalyptic landscape. “We could make love right here!” she thinks. “Who, in this dead city, would stop us?”

Mohamed is a 40-year-old Indo-Caribbean scientist and writer. Her debut novel, the cosmic horror Beneath the Rising, is currently shortlisted for Canada’s Aurora Award. She has several novels and novellas published or forthcoming, including this summer’s And What Can We Offer You Tonight, set many generations from now, in a city-state in which the government can hunt and kill anyone who isn’t employed.

This September, ECW Press published The Annual Migration of Clouds, set in a struggling post-collapse community in what was once the University of Alberta, where Mohamed did two degrees. Though remnants remain, universities have become distant dreams.

“The truth is, of course, that the chain did break,” thinks Reid, the young female protagonist in The Annual Migration of Clouds. “And not once but again and again and again; and not just in the transmission of knowledge from the learned to the unlearned but also parent to child, elder to youth, country to country, every way you could think of. We live in the scattered links that remain.”

“I was really struck by that, as a kid,” Mohamed says. “It must have formed part of my fictional DNA, because I guess I was thinking, what does drive us as we go along, as humanity goes along, to a common cause? Rather than splintering like that into more and more distinct groups that have less and less contact with each other?”

When Mohamed was a kid, the disaster looming over every imagined future was nuclear war. Now, it’s climate change. Mohamed’s job as a reclamation and remediation policy specialist in the Alberta public service includes “future proofing” policies related to the impacts of industrial activity on the land, looking at trends, modelling and tipping points.

Governments did not coordinate to prevent millions from dying of COVID-19, Mohamed notes.
“So I’m unfortunately profoundly pessimistic about humanity’s ability to stop climate change, rather than just come up with increasingly baroque ways to deal with it, that will be increasingly segregated into: who has the money to survive the effects of climate change in their area, and who doesn’t.”

The Annual Migration of Clouds is not alone among recent science fiction in exploring the future at a local level; another example is Waubgeshig Rice’s Moon of the Crusted Snow, in which an Indigenous community finds its own ways to deal with widespread disaster.

The choice of whether we splinter or work together is before us. But even in a fractured future, stories such as Mohamed’s show how community persists in the cracks.