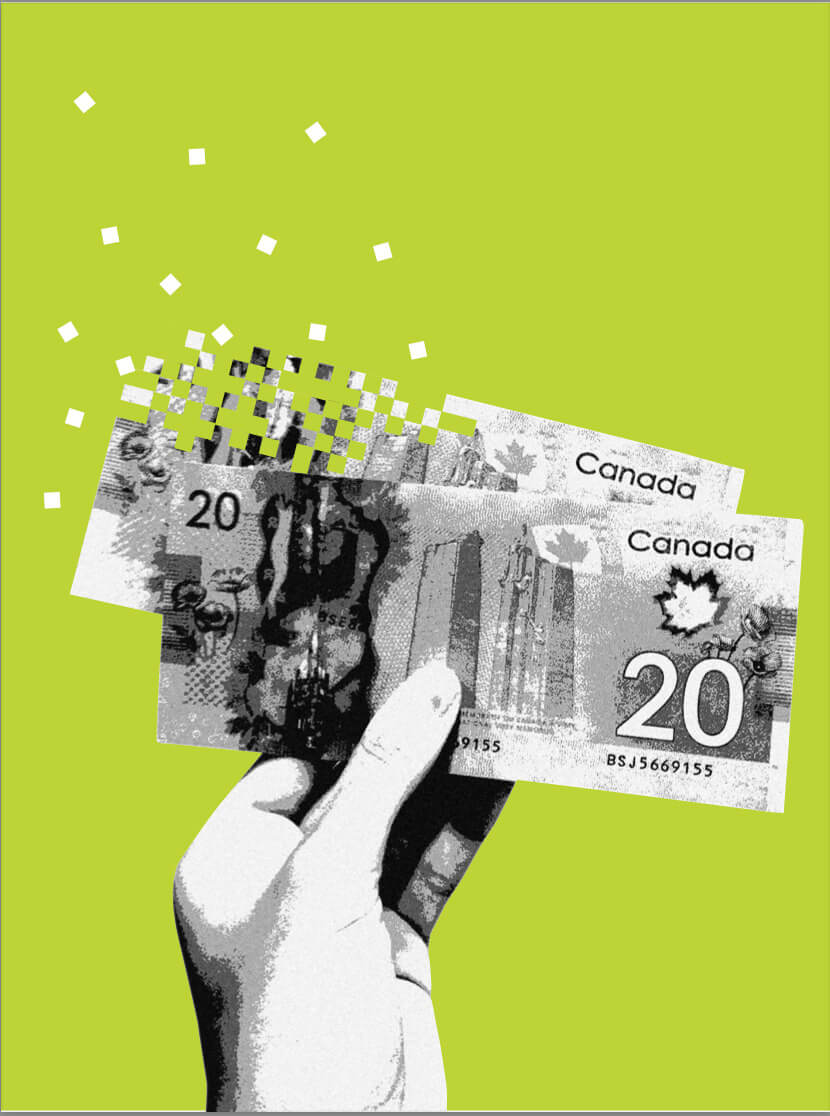 Back in April, a friend and I had met up to grab smoothies at a café before going on a lockdown walk.

We each ordered, and I pulled out my debit card to pay. “Sorry, cash only,” said the woman behind the counter. I stared blankly at her, then my friend. “I don’t have any cash,” I said; my friend confirmed that she didn’t either. We apologized to the woman, then made our way to another café that took cards.

Even before the pandemic, Canada had been trending toward becoming a cash-free society: cash transactions have been declining steadily since 2011, when contactless debit and credit (i.e. tap) first gained popularity. While two-thirds of Canadians reported using contactless credit or debit in 2018, 90 percent of unbanked people (meaning those who have no relationship to a bank) report using cash.

Since the start of the pandemic, many businesses started banning cash transactions due to concerns about it being a nesting ground for the COVID-19 virus. A new report by FIS Global, an international FinTech company that uses technology to better engage in financial markets, states that since the COVID-19 pandemic began, cash transactions have declined by more than half. It also states that FIS Global expects cash to be used for only four percent of in-store payments by 2024.

It seems like very few banked people I know use cash these days. The friend that I had been walking with said she hadn’t taken cash out of an ATM since March 2020, before the pandemic—something I realized was true for me too, after thinking about it.

With what seems like the imminent death of cash, sped up by the COVID-19 pandemic, I wonder if the things we give cash to, being mainly small businesses and each other, will also disappear. As some of us adapt, who might get left behind?

The history of widespread cash use is a relatively short one. Standardized currency was first implemented in some regions of the world in the Axial Age, from 800 to 300 BCE, then again after periods of disuse in East Asia and Europe during the 15th century. Before its employment, people would use whatever was relatively abundant around them as a surrogate, like metal nails or cod, or would run up personal credits with each other’s businesses.

The second attempt to introduce a mass standardized currency coincided with the advent of capitalism in the 16th century. Adam Smith, a prominent economist of the 18th century, believed that it would be advantageous for a country to bring everyday transactions into a uniform currency, and to abandon the practice of mercantilism, which involved the crown accumulating as much bullion (gold or silver, before coining) as it could.

As the colonial exploits of Spain and Portugal brought massive amounts of silver into the European economy, it became more possible to regulate currency, and to remunerate everyone with the same reward. Near the same time, standardized paper money, backed by bullion, became more common, and was another means to regulate transactions.

In the 18th and 19th centuries, central banks increasingly assumed control of printing paper money.
In Canada, Indigenous people had longstanding practices of trading, using items of copper, precious metals, and furs as the basis of a currency. Early settlers used a variety of items as currency, including playing cards with royal stamps, French and Spanish silver coins, the British pound, Nova Scotian money (a currency used in Nova Scotia until 1871), American money and “army bills,” before a standardized Canadian currency eventually became more circulated in the decades after confederation.

The many types of currencies meant that money had many forms up until the 20th century. Money then became pretty standardized, with cash as the main method of payment, until two new forms of payment were introduced in Canada: credit in 1968 and debit in 1988. It took a while for debit to catch on, though, and it wasn’t until 1994 that it was offered by all banks and accepted by retailers in every province.
By 2009, however, cash accounted for only 54 percent of transactions, and this dropped to 33 percent by 2017.

The question then is, who uses cash these days? In the U.S., 55 percent of small businesses don’t accept credit cards. In a study conducted in Canada in 2008, 93 percent of businesses accepted debit, while 92 percent accepted credit, and all accepted cash.

Many small businesses prefer cash because they don’t incur processing surcharges. Salon SLiJ, a longtime hairdressing salon in Montreal, used to accept cash and e-transfers but began accepting only e-transfers during the waves of the COVID-19 pandemic. Oleg, the manager of the salon, who prefers to go by first name only, says that, like many salons through the pandemic, “our sales were down more than fifty percent.”

Nikhil Tangirala, an urban planner who lives in Montreal, says that he stopped using cash during the pandemic due to hygiene reasons. “I don’t use much cash anyway, but I definitely began using less during COVID,” he says. “I stopped going to my local depanneur,” which is cash-predominant and accepts debit with surcharges, he adds.

Beyond small businesses, those who predominantly use cash tend to be those on the lower end of the socio-economic scale. In Canada, three percent of Canadians, the equivalent of over one million people, are unbanked and 15 percent of Canadians, or nearly five million people, are underbanked, meaning that they have no or limited access to credit and debit for a variety of reasons, such as having a poor credit score or living in a location underserviced by banks. Correspondingly, proportional to those who are unbanked or underbanked, 15 percent of Canadians report being heavy cash users.

Étienne, who prefers to go by first name only, is an unbanked person living in Montreal who is also unhoused. His primary income is obtained through asking people on the streets for money. “It was tough, it was really tough,” Étienne says, in reference to his income during the pandemic. “It’s been tough now too, but it’s been better since COVID … More and more people use debit cards now instead of cash … they say ‘sorry, I only have debit.’”

As cash is increasingly fading out, a new player in the game, cryptocurrency, has been entering circulation, digital coin by digital coin. Cryptocurrencies, such as Bitcoin, have no physical form at all and can only be used for online transactions, which are processed in a decentralized fashion by brokers who cash in on every trade. Cryptocurrencies typically have finite quantities of money which ensures that the currency doesn’t lose value. This differs from physical currencies, which are protected by interest rates.

While cryptocurrency circulation is growing, increasing pressure on central banks to create their own digital currencies to facilitate transactions, in their current private form they present significant barriers to access. For one, the limited quantity of cryptocurrencies mean that they are very expensive; at the time of writing, for example, one bitcoin is equivalent to $47,784 CAD. Another major issue is that cryptocurrency transactions are expensive, with bitcoin transactions costing nearly $60 in April 2021.

Cryptocurrencies also are also uniquely digital currencies, meaning that they are again reserved for those who choose or are able to process electronic payments. Even though there were nearly 900 Bitcoin ATMs in Canada as of 2020, these only service people who want to trade in physical currency for bitcoin, not the other way around.

Professor Matt Tiessen researches digital economy at Ryerson University. He thinks that cryptocurrencies are on the rise because they can potentially circulate money quicker. “Money likes to move,” he says, “and the liquidity of cryptocurrencies permits that.” At the same time, he agrees that the cost and means of processing private cryptocurrencies present significant barriers of access. “It’s prohibitive,” he says.
Tiessen is wary, however, of the concept of a central bank-produced digital currency, thinking that it could create significant and novel annexations of economic control. “[A national cryptocurrency] would create a system of surveillance and power,” Tiessen says. “Cash just sits around.”

“Part of the allure for government in creating a national cryptocurrency would be that it could be quickly distributed, and then also expire, which would ensure that it was always being spent.” (This comes up while he is speaking about a potential Universal Basic Income issued by the government.) A national digital currency could then side-step some of the barriers to access of private cryptocurrencies, but could also reduce autonomy. “It could limit your financial freedom,” Tiessen says.

As we slowly transition out of the COVID-19 pandemic, into a version of life that involves touching, hugging, filtering between stores and homes, and feeling near to the people and things we care about, where will we go with cash? Back before the loonie, we had lots of different forms of money, but these had widespread circulation within localized communities, and, within these communities, had relative accessibility, despite general inequality.

Contactless tap might run in the same vein of magic as buying physical goods with invisible currency, or of “mining” intangible bounty. Cash, though, links us to a current, a common denominator, of which we are all a part.