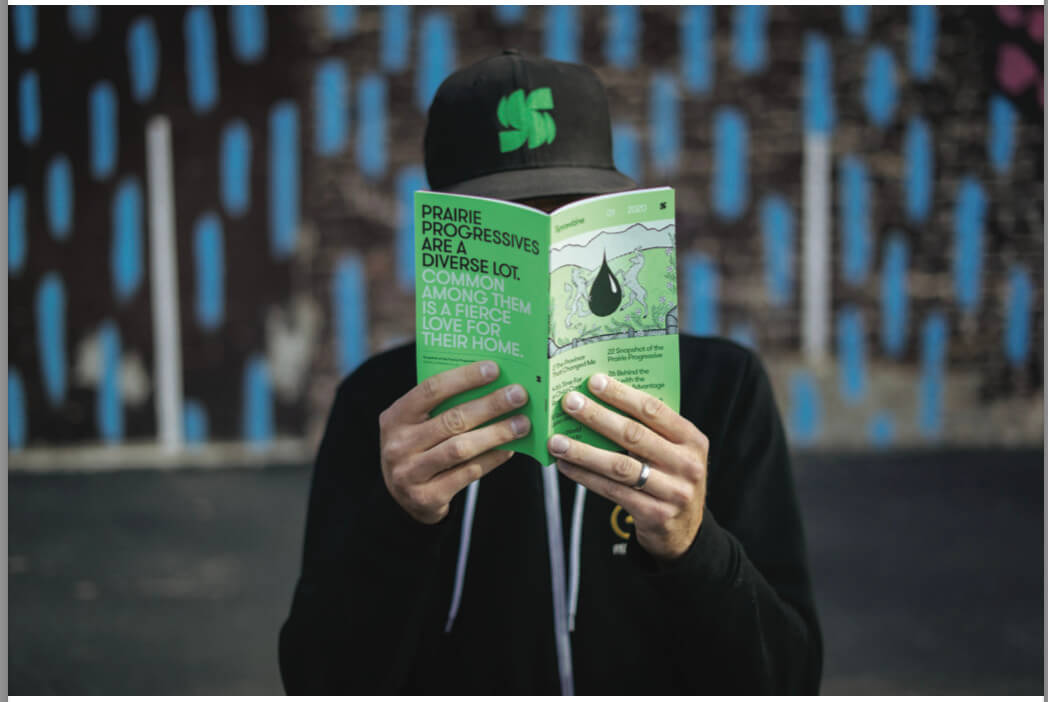 Jason Kenney, the United Conservative Party (UCP) premier of Alberta, is the best thing to happen to The Sprawl, says Jeremy Klaszus, the publication’s editor-in-chief.

Under Kenney’s leadership, the UCP’s approach to controversial issues such as the COVID-19 pandemic and climate action has divided Albertans. Polarization is especially evident between rural and urban residents.

Individuals who have resisted the premier have found comfort in The Sprawl, which offers a progressive perspective and in-depth analysis on social issues that’s hard to find in the publication’s competitors.
“A lot of people support The Sprawl because they feel alienated here in Alberta,” Klaszus says. “People tell us over and over again … ‘It gives me hope. It helps me feel a little bit better about living here.’”

Klaszus founded The Sprawl in 2017, two years after Fast Forward Weekly—Calgary’s alternative weekly newspaper—shut down. Klaszus, a graduate of Mount Royal University in Calgary and two-time National Magazine Award winner, was a staff writer at the weekly several years before it closed.

“After Fast Forward folded, there was basically a gap in news coverage in the city … lots of people who went to Fast Forward for the non-mainstream news and analysis now didn’t have that anymore,” he says.

Working solo, Klaszus covered Calgary’s 2017 municipal election on Facebook. He continued this pop-up journalism model, reporting on one issue at a time, such as city hall’s budget and Calgary’s bid to host the 2026 Winter Olympics.

Now, The Sprawl relies on crowd-sourced funding instead of ads or a paywall. As of March 2021, it has gained more than 2,100 paying members across Canada since its inception; membership more than doubled in 2020 alone.

The rising membership has allowed the outlet to grow its staff and content. Although the publication has a Calgary focus, the number of supporters in Edmonton has grown considerably, which is why The Sprawl is adding an Edmonton-based editor to expand province-wide coverage.

“We’ve evolved out of this pop-up model to be more ongoing,” Klaszus says. “But the idea is … slow journalism, not the daily news grind. We don’t try and keep up with whatever is in the news that day; we intentionally leave all that and step back, and then do more in-depth stories that people aren’t going to find elsewhere.”

Slow, constructive, and solutions-oriented journalism is emphasized in the outlet’s manifesto, which guides the publication’s coverage and allows readers to hold it accountable, Klaszus says.

This strategy is showcased in stories about for-profit care homes ravaged by COVID-19 and the barriers immigrants face when searching for employment in their profession, for example.

“Focusing on doing a few things well can be quite powerful,” Klaszus says. “That’s really where we’ve been able to connect with our audience, is through quality over quantity.”

One benefit of being a new arrival in Canada’s news media industry is having the opportunity to learn from the industry’s mistakes, including the systemic racism that continues to impede journalists of colour.

The Sprawl publicly endorses the seven calls to action on media diversity from the Canadian Association of Black Journalists and Canadian Journalists of Colour, and will also start collecting information on the demographics of its staff and editorial contributors. The results will be published in an annual transparency report.

“At The Sprawl, we recognize that systemic racism and discrimination have created a society where the voices of many Albertans aren’t uplifted. We are committed to amplifying these voices by publishing the work of journalists and writers from a variety of underrepresented backgrounds,” the publication’s website says.

While already unique in its ad-free, curiosity-driven approach to journalism, Klaszus says The Sprawl also offers its audience a taste of playfulness with the use of comics.

“We try to carve that out too, where we’re doing some playful stuff, amid the more serious and weighty coverage that we do.”

Even as the publication grows beyond Calgary, Klaszus says he doesn’t see it leaving the province any time soon—if ever.

“I think part of what works about The Sprawl is that it is local, and that people … identify with it and are proud of it.”