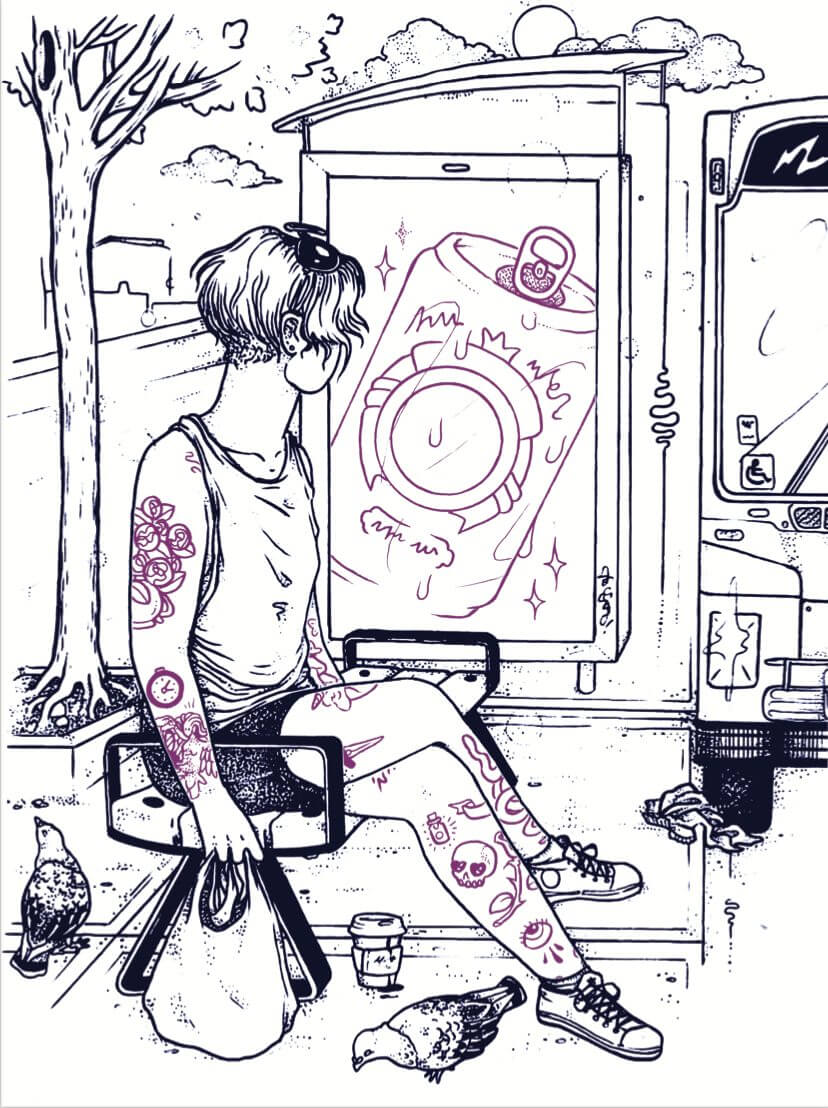 One of the big changes in my life as I’ve gotten older has been becoming an insomniac. My brain has decided to forgo the signals that I am asleep and should remain so until an appropriate hour sometime in the waning hours of the dawn, and instead wakes me up around 1 a.m. This time is the sweet spot when nothing good happens, but your defences are asleep. It is when I used to be able to rely on a drink to calm me down and bring me back to being tired. It is when I realize how alive I truly am.

I’ve been sober for a little over two years, a decision I made impulsively one afternoon after a lovely house party where I simultaneously had a lovely time and wanted to kill myself—fight or flight at its finest. It wasn’t too long after that last bout of drinking before the cracks in my dependencies started to show themselves. A friend is playing a show at a bar downtown and your friend group will be there, but also you know it’s a room full of strangers. What are you going to be holding in your hand that will help keep all your anxieties in check? You’ve been invited to speak on a panel about mental health in creative industries and the conversation gets difficult. How are you going to calm your nerves and your heart after an hour of hard questions you don’t have an answer to? These were the types of questions I would ask myself, stray thoughts rattling around my brain desperate for a solution. Drinking, for me, was part of a comprehensive anxiety management system—a toolkit I kept in my closet full of broken tools and the end of a roll of tape, but one I kept telling myself was sufficient to suit my needs. This is all I’ll ever need, I’d tell myself, just me and this rusty hammer with a broken handle against the world.

During a stressful event it is easy to keep one hand on the wheel if the other is holding a whiskey, neat. In 2016, when Donald Trump won the presidency of the United States, I joined in the game that was to take a drink when things looked bleak. I stayed up all night watching that broadcast and had no idea who had won the next day, but I was well aware of the headache and it smelled like I had tried to cook something that was still sitting on the counter. I wasn’t alone in this either; ask anyone where they were that night, and the majority are going to come back with, “I was at a bar,” or “a friend’s house that had projected CNN onto the wall. BYOB.”

I quit drinking in March of 2019, a spring day like any other. I marked the occasion by getting a tattoo on my right arm of a self absorbed harpy gazing longingly at herself in a hand mirror. This was also my first test—with every tattoo I’d had before that I drank a shot of whisky before, just to settle my muscles and nerves to prepare them for the road ahead. Never let anyone experience pain without a suppressant, I’d thought. I had a quad-shot Americano, black, and smoked two cigarettes on my walk to my appointment. Replacing vices with others, just trying to find a new way to feel. That tattoo hurt like hell, but it’s the first one of many that I’ve felt in my bones, every nerve sending a signal to my brain letting me know I was alive and present and experiencing pain, but that it would be okay.

That subsequent summer was my first one living in Toronto, having escaped the Yukon the past winter. The Yukon is where I learned to drink, where I snuck my first quarter bottle of red wine, where I brought my first six-pack of Mike’s Hard Cranberry Lemonade, that my sister had to run and buy for me, to a house party in Grade 12, when I was trying to find a place to belong at the end of my high school career. One of the cool kids on the couch saw me pull the bright red bottle out of my bag and called me a faggot. I dumped all six in the sink as everyone laughed at me, then stole six cans of lukewarm Kokanee from another kid’s bag when he wasn’t looking. “See, now you’re a man,” the cool kid said when I cracked that first can. What I drank was every bit as important as the fact that I did. The Yukon is where I came out and told everyone in my life that I am a transgender woman. It’s where I drank through that first year of being out, when people surrounded me at my office trying to get in the door, calling me slurs and making vague threats before smashing bottles of wine against the locked door. The Yukon is where I drank until I tried to end my life, and took myself to the hospital to keep me safe from my own drunken hand. I told everyone that I was having stomach problems. That seemed easier to explain than I had drank too much and tried to tap out early. The Yukon is where I ran away from the problems that had piled too high for me to see over anymore.

And here I was now, in Toronto, my chosen home. Sober and alive for the first time. I hit my first summer with open eyes, ready to experience the sun and the life I hadn’t lived for 37 years. This was not without its challenges. Every bus stop I walked by had a six-foot picture of a cold mug of beer, cold beads of water running down the side, ensorcelling me with the power of its refreshment. I would duck into any nearby corner shop and buy a tall can of soda water with a high fructose level, or maybe an iced tea. Give me something cold and refreshing that hits me just right, help me forget that I have to fall asleep with my own unfiltered thoughts. But, all the same, every day took me one step closer to learning I didn’t need alcohol to get me through. Every day took me further from the darkness I had left behind that last winter in the Yukon. Here, I could sit in the sun and smile, drink a grapefruit LaCroix and walk home at a reasonable hour without spiralling the entire time. I felt every emotion in every step I took and I understood that I needed to feel them. That I could no longer run or hide from emotional pain, that I had to walk through it.

One year after I stopped having “just one more drink,” the world learned of the dangerous state of COVID-19 and we entered a prolonged state of isolation. Everywhere around me, people were stockpiling toilet paper and whiskey in equal measure. I wasn’t sure I had built a better toolkit to prepare myself for such an unexpected event by then, one that was sure to be filled with new traumas and anxieties, as an uncertain future rolled itself out ahead of each and every one of us.

I watched the numbers climb, and I tried to drink enough coffee in the day to keep my hands from shaking too much, bringing back that old familiar feeling when I would drink brown liquor for days on end, trying to act like nothing was wrong. I began endlessly searching for the right flavour of soda water that would erase my uncertainty of the future. I watched people celebrate Susan Orlean live-tweeting her experience of drinking herself incoherent and felt a twinge of jealousy and regret. I wanted to be able to live so freely, but I knew how dangerous that was. How easily being the fun drunk that cheekily succumbs to alcohol, much to the amusement of everyone around them, becomes the sad drunk that takes themself to the hospital. I stopped sleeping properly and laid awake at night worrying for the future of my partner, our pets, and our life together. I wondered how long we could stay isolated from the people that made us all feel safe and connected. How long could I keep the wolves at the gate?

What I learned from these nights of being awake is how important the hard emotions are in our lives. My brain doesn’t stop working at night, but I am aware and cognizant of that. I can spend the endless hours awake wondering why I am feeling anxious, where my depression and fears are coming from, and rational ways I can try and manage them the next day. I think about how hard everything is, and how I am sure we will see the other side, but how no one knows what shape we will be in when we get there. I think about who I am, really, now that I’m not that scared person running from their problems but living deep in them. I lie awake at night, sober as the day is long, and sneak into the bathroom to cry so I won’t wake anyone up. My bare feet on the cold and rough concrete floor, every nerve sending a signal to my brain letting me know I am present and experiencing pain, but that it would be okay. When my defences have been done away with, and in the hard hours of an insomniac’s night, I realize how alive I finally am.