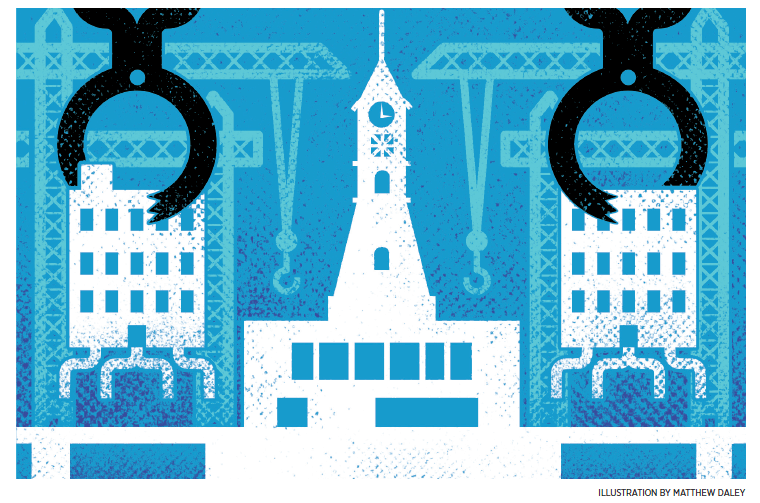 After the break-up, I walked Yonge St. at night.

I didn’t understand this compulsion, but the circuit remained the same: a few drinks at a village bar and I would wander the corridor between Bloor and Dundas, peering into closed stores or sleepy bars, stopping in at a late-night bookshop to peruse the dusty shelves and eavesdrop on the surly owner’s conversations with customers, habitually thumbing through texts on my phone.

The segment of Yonge I’d chosen was unremarkable—a mishmash of architectural styles, occupied by chain restaurants and convenience stores, seedy enough to attract unsavoury characters and containing a fraction of the nightlife of hipper sections of town. But I liked it—it felt lived-in, like neighbourhoods in Montreal or New York, where converted spaces and faded signage were a source of pride, evidence of civic durability. Nearby businesses like the House of Lords salon had catered to generations of shaggy, misguided teens, while strip clubs Zanzibar and the Brass Rail stood on either end of the street, like neon bookends.

And in the middle of all of this was the decaying clock tower of St. Charles Tavern, one of the city’s earliest and most notorious gay bars, where drag queens paraded on Halloween night in the 1970s, pelted with eggs by jeering crowds. Once a fire hall, it was now a games store with bright yellow signs advertising discount prices on superhero figurines.

I would go as far as my feet would take me, then head home, only to return a few nights later to do it all over again. A comforting cycle. A routine, of sorts.

My ex-partner Mark and I also had routines, when things were working. If the weather was nice, we would climb the steep stairs of his old-but-affordable Chinatown brownstone and take his dog through the university campus, stopping for a quick drink at a pub we liked because it was queer-friendly and staffed mostly by artists. It was there, under the smoky red lanterns, that he had grasped my hands when I received word of my mother’s heart attack, tucking himself into me. He told me he wasn’t going anywhere. His words buoyed me.

On the weekends, we made our pilgrimage to Honest Ed’s, all labyrinthine stairwells and tacky signage. Filling our baskets with vitamins and tchotchkes, we’d pose for playful photographs in front of the dated theatre posters or mirrored displays, one of them with massive pink text: welcome to yesterday. Mark made obscene gestures I’d only discover later while swiping through my phone. “That was the whole point of the photo,” he’d tease.

At night, when the spirit would take us, we’d head to Zipperz, a gay piano bar with a club tucked behind a velvet curtain. It was like something out of a David Lynch film, with its cheap drinks, show tunes, and a large plaster torso and buttocks on either side of the entrance. The bar attracted a clientele older than us by a generation, but one that was more mixed and less pretentious than at other village haunts. Mark loved it and the owner loved him. There, dancing on a chrome floor that was often slick from beer, we’d tangle together, between the bodies and beneath the lights, three decades of music washing over us.

On our way home, we’d stumble drunkenly past that same clock tower above the old St. Charles, trying to imagine walking the circuit as those brave queens all those years before. I’d threaten to scale the building and climb inside the tower. “One day, I’ll get inside that thing.” He’d laugh, “I look forward to seeing it.”

But within a year, Mark was gone. So, too, the Chinatown brownstone, the pub, Honest Ed’s, and Zipperz. And in their places, cavernous pits, large cranes and empty storefronts. The markers of progress in a city with a red-hot real estate market, but also indicators of loss, of absence. Yellowing teeth needlessly tugged from a smile, soon to be replaced with expensive titanium implants, good as new.

There’s something to be said for the challenge of recording memories in a city that rewrites itself, of processing trauma while navigating a backdrop of urban amnesia. In the aftermath of loss, you desperately try to grasp for the concrete, the tangible, to orient you. You retrace your steps, revisit important places, attempt to solidify past experiences or maybe even exorcise them by confronting whatever residue is left behind.

But in the absence of the familiar, there is only the unknown.

All living cities evolve and transform, but our city is different. A metropolis without a guiding mythology, Toronto has been shaped almost entirely by economic whims, political resentments, and slash-and-burn epochs. Sometimes literal fires, as in the Great Fire of 1904, and other times surges of re-development, like the unceremonious destruction of Victorian architecture in the 1970s or the condo craze of the present, with large swaths of the city razed and rebuilt without much thought to history. A city with a comforting blankness, with each successive generation erasing the remnants of the previous one, a civic character defined by willful forgetfulness and in the interest of a certain type of progress.

For some, this progress is a move toward the antiseptic, expensive, and decidedly conservative. A notorious strip club like Jilly’s becomes a boutique hotel, the heritage plaque out front conveniently ignoring the more sordid chapters in the history of the building and the cash-strapped tenants re-homed to less trendy neighbourhoods. Some facades are maintained, but grafted off of historic buildings and then mounted onto glass boxes, the architectural version of a killer wearing their victim’s face. Mark’s old brownstone, populated mostly by queers and artists, is demolished and replaced by an expensive condo marketed on a bohemian brand; an old family-run restaurant is transformed into a hip new brunch spot for new, more monied neighbours.

The city’s edges are sanded down and its darkest corners brightly lit. Organic spaces, sprung from human needs and messy excesses become a marketing tool for real estate agents, but are never an imperative for preservation. Raze and rebuild.

The places we inhabit disappear and the spaces that replace them leave no room for us. The city, a draw for marginalized queer people with an assurance of community and infrastructure, is also increasingly unaffordable, pushing many into outlying suburbs and smaller towns—cheaper places where safety is less certain and visibility is non-existent, and where a lack of density prevents proper community organizing or easy access to progressive workplaces. An economic closeting in a way, where the golden handcuffs that enable you to rent affordably or possibly own property also prevent you from holding your partner’s hand in public.

Memories get written on the margins because there is no space on the page, but soon there is no place in the book.

I think of this during one of my last nights on Yonge, as I climb the clock tower. I’ve gained access to the old St. Charles building as part of a creative project, an attempt to document the space and its history before it is torn down and replaced by an expensive condo. Little remains from that grubby tavern, thirty years on, but I attempt to record it all—the abandoned keg room, the sealed dumbwaiters, even the massive furnace. No drag queens.

Inside, I climb a narrow wooden staircase to the first platform, a filthy room with four windows in each direction. Above me are the cracked iron bell, green from moisture, and a ladder leading to the inner mechanisms of the clock, frozen in time.

Staring up, I feel history wash over me. The firefighters scrambling up and down these wooden stairs, and the queer men on barstools, hunched over cheap beers, desperate for connection, terrified of the world beyond. I feel compelled to contact Mark, to send him a message to let him know that I’ve made it, that I’ve found my way into this hallowed space. That I’m a part of history.

But as I fumble with my phone in gloved hands, I look out onto Yonge, at the strip I’d walked night after night. From this vantage point, I can see the House of Lords and the old bookshop, now both shuttered, large “For Lease” signs looming in empty storefronts. Beyond that, condos and cranes, many rising around the clock tower itself, dwarfing it on the street.

And below me, an uncharacteristic silence.

I put my phone away.