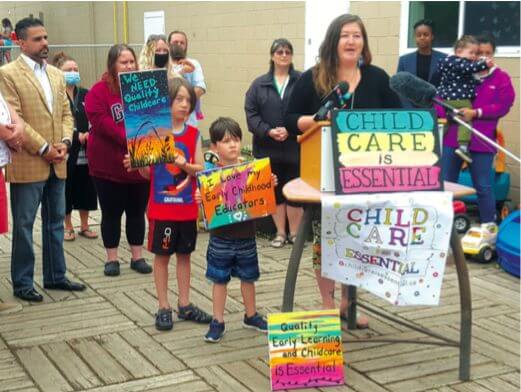 A few years ago, Kisa MacIsaac, an early childhood educator (ECE) and mother of three in Winnipeg, tried to calculate the feasibility of putting three children in childcare for the summer. At 70 dollars per day, she “would have been working for nothing, anyways,” she says.

She ended up taking the summer off while her husband’s salary carried them through, but she knows that many others aren’t as lucky. Although Manitoba’s childcare fees are the second lowest in the country, “for many it’s still very, very expensive, especially if you have two or three children,” she says.

The lack of access to affordable childcare, especially during a global pandemic, when many people around the country have lost their jobs, was striking to MacIsaac. As government leaders began discussing what school would look like in the time of COVID-19, MacIsaac heard no mention of childcare. That’s why she joined a group of parents, ECEs, and community members to form Childcare is Essential, a Manitoba-based group advocating for publicly funded, high-quality daycare in the province.

When brainstorming a name, MacIsaac says, “The messaging that kept coming through is the words ‘childcare is essential.’” So, they went with it. Through weekly Zoom meetings, they planned campaigns and activities, ultimately mobilizing community members at a rally in late August in front of the Minister of Families, Heather Stefanson’s, office.

Members aren’t sure why affordable childcare isn’t on the provincial government’s priority list. Studies show that for every dollar invested in early childhood education, the payback is anywhere from six to 12 dollars. An investment in childcare, then, is an investment in an entire community.

There’s on-the-ground evidence to suggest this, too. In 2012, the provincial government added an early child development centre, Lord Selkirk Park Child Care Centre, and family resource centre in a social housing complex in northern Winnipeg. Using a learning approach specialized for under-resourced families, Healthy Child Manitoba, Manidoo Gi-Miini Gonaan, and Red River College studied the centre and found that children in the program made considerable gains in language development. Parents also reported multiple benefits, from financial security, to having time to work or go back to school, to developing trusting relationships with ECEs.

MacIsaac says she sees similar cases at the non-profit early learning and childcare program where she works. Families living below the poverty line receive a subsidy—a two-parent family with two preschool-aged children needs to make below $22,504 to receive the maximum subsidy. The extra time and money can give them opportunities to find new jobs or start saving to pay off loans or move into a nicer home. But as soon as they’re making a little more money, “their childcare subsidy gets clawed back and suddenly they can’t afford their childcare anymore,” she says.

In March, the government of Manitoba set aside $18 million to help ECEs open their own childcare centres at home or in the community in response to the COVID-19 childcare centre closures. But, MacIsaac says, “That’s not an exciting opportunity for me at all. I work in an extremely high-quality program with an amazing team.” It makes sense—evidence shows that on average, in North America, quality of care is higher in non-profit childcare centres.

And that’s what Childcare is Essential is fighting for. MacIsaac says success for the group looks like high-quality, universally accessible childcare with trained ECEs for anyone who needs—or wants—a space for their child.

“It sounds cheesy to be like ‘the children are our future,’ but they literally are, and anything we can do to help children in their early years is going to help everyone in the long term.”