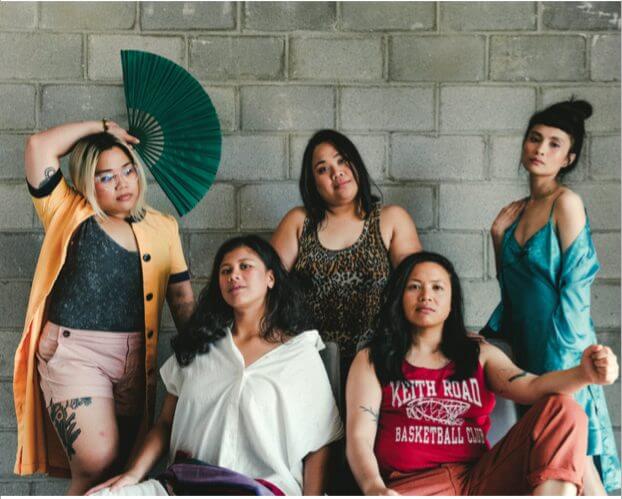 We were teaching ourselves something that we didn’t know,” says Kat Estacio, co-founder of Toronto’s Pantayo, a quintet blending traditional Filipino kulintang music with Western pop and rock styles. That’s partly why it took eight years between the ensemble’s first practice in 2012 and the release of their self-titled debut earlier this year. As with many of the best records, though, Pantayo was worth the wait.

The group is made up of Kat Estacio, her twin Katrina Estacio, Michelle Cruz, Eirene Cloma, and Joanna Delos Reyes, all of whom met over the course of several years at Kapisanan Philippine Centre for Arts and Culture’s former location in Kensington Market. They discovered a shared desire to play Filipino kulintang music, and decided to learn together, via YouTube videos and sheet music. Typical kulintang pieces are played on gongs and metallophones, but before too long the group found themselves innovating on tradition.

“As we were exploring, we were putting in our own influences, ’cause we’ve been exposed to pop music, all five of us,” says Kat. “We played the sheet music in a way that made sense to us, added our flavour to it.”

This flavour comes in many forms on their record, which draws inspiration from R&B, hip-hop, and synth-pop. The album covers a lot of ground both stylistically and thematically. On the soulful “Divine,” Cloma beckons a lover over a cool beat. Other tracks like “Taranta” and “Kaingin” feature driving percussion, chant-like vocals, and lyrics about trauma and resistance, inspired by topics like colonialism and missing and murdered Indigenous women.

The record is tied together by its kulintang base, the gongs sometimes serving as a captivating centrepiece, or otherwise an atonal counterpoint to synths and drums.

For Pantayo, learning to play kulintang music was a process of understanding a part of Filipino culture that had previously felt inaccessible. Even band members who grew up in the Philippines were raised on North American pop culture—the band counts The Tragically Hip and Santigold amongst their influences—and kulintang music felt far away.

“I saw those instruments as something ornamental in a room, not really incorporated in daily life,” Kat explains. “But they’re a community-based instrument; people would play them outside after a long day at work.” Kat grew up in Manila, while kulintang music is played predominantly in the southern Philippines.

Approaching the tradition as outsiders, the group took care to reach out to kulintang teachers both in the Philippines and North America. After spending years learning traditional pieces, they began writing material for Pantayo in 2016, working closely with producer alaska B of experimental rock group Yamantaka // Sonic Titan. During the album-writing process, the band grappled with questions of identity: “Who are we? What are we about?” Cruz says they asked themselves. “How can we stay away from making music just because it’s what everyone’s going to like?”

The answer to the questions came through the music itself, and partly through the process of building Pantayo as a group. The band members’ experiences as queer Filipina-Canadians shape their work implicitly. “I’m not the same person that I was when I was in the Philippines,” Kat says. “I am the result of the migration that happened. That story is what we want to tell, apart from the narrative of the songs themselves.”

With the release of the album, their story has reached a wider audience, landing them on the Polaris Prize shortlist and opening up new opportunities. Though the group was disappointed not to attend a Polaris gala in person, they’re already working on ideas for new material, as well as spreading kulintang music to others through educational workshops in Toronto schools. “The fact that we’re able to talk about the tradition and our experience as a band making these songs,” Katrina says. “It’s nothing like I ever imagined.”