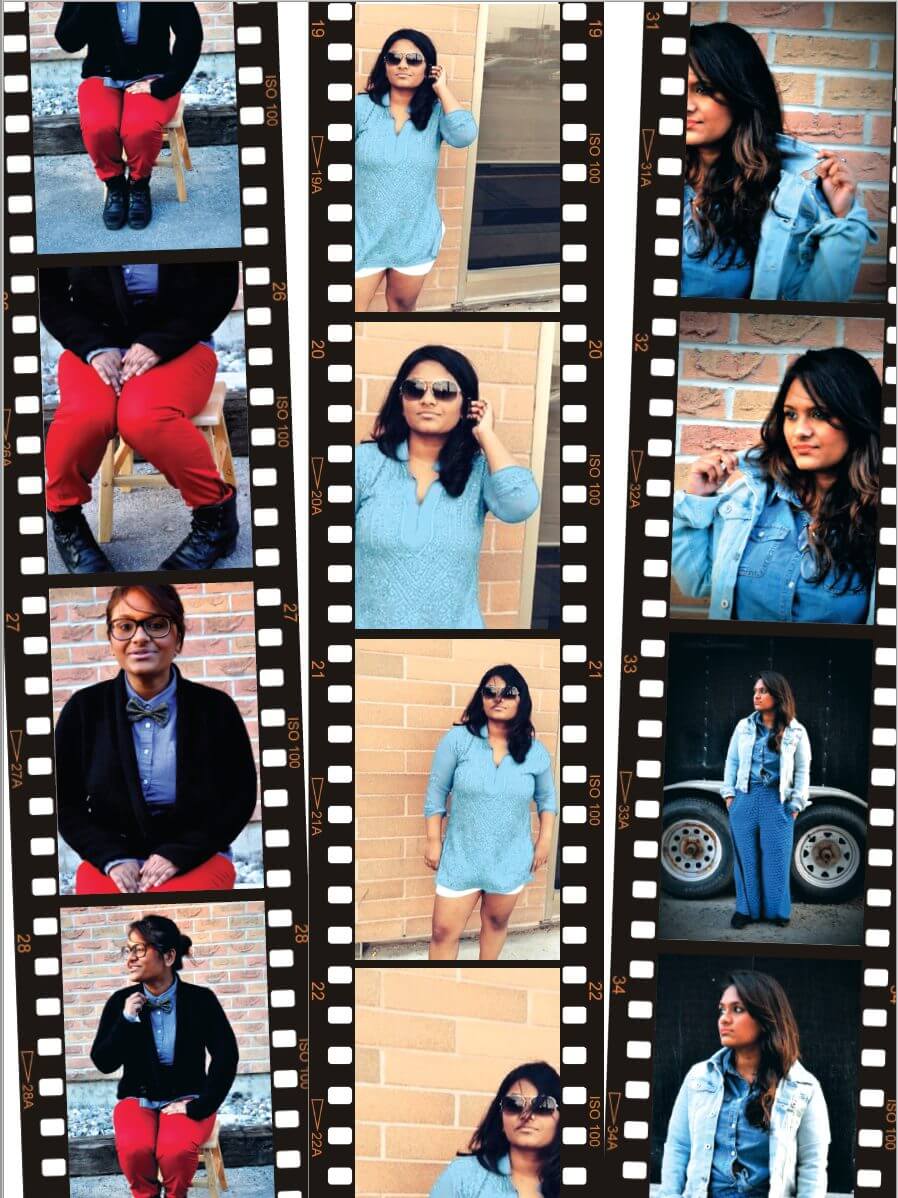 I am not sure what compelled me to ask him, and what compelled him to say yes. But there I was, craning my neck like a chicken about to be slaughtered, and smizing my eyes for all they were worth, while he clicked. The photos were for my new fashion blog, my experiment with fashion as
an academic.

At the time, I was in my second year of a Gender Studies MA at Queen’s University, while he was in his second year as a master’s of engineering student. We had met on our second day in Kingston the previous year, and upon meeting another brown person—the very first since our arrival into the city—we had been drawn to each other in a way neither of us could explain. He was a good-looking man with a childish laugh, somewhere between a gurgle and a chuckle. He loved cricket, and even played the sport for the university team. He was a little over two years younger than me, and apart from our love of food and Bollywood films, we had nothing in common.

I grew up a tomboy. As a kid, my go-to outfits were knee-length shorts and t-shirts. They were great because they made movement easy. With my closely shorn head of hair, on my red bicycle, when I whizzed through back and inner streets (within a one-to-two mile radius of our apartment building), I could very well have been a boy to those who caught a glimpse.

But even those days of passing were short-lived. Shortly after I hit 10, I got my period, and my nubby breasts suddenly began to sprout, like mounds of alien flesh. My mother diligently got me training bras, contraptions that I hated. I despised the feeling of being caged in, and so when I went on my bike, I wilfully forgot to insert the changing geography of my chest into these elastic coops.

A neighbour from two houses down stopped me on the second day I went out like this.

“We were wondering,” she said, exchanging looks with her sister, “are you wearing a bra?”

For the first time, I felt conscious of my body, in the way I was seen. I had hoped that if I ignored my changing body, everyone else would too.

“I told you,” she said to her sister.

“Well,” the oldest girl said to me, “you should wear one.”

He liked long hair on me. When I wore makeup and dressed up in dresses or skirts, I found his smiles got wider. He never said anything outright. He never said, “Don’t wear this,” or “do your hair like that.” But it was implicit.

Once or twice I managed to take him to a house party with my gender studies peers. He didn’t like going. He said that he felt uncomfortable.

In my second year of school, and the second year of our relationship, we began to drift apart. I often found myself losing my temper, conjuring fights out of thin air. He often said nothing during these fights, his silence fuelling my anger and unfettered words; words that made things even sourer between us. Neither of us wanted to let go. I held onto the belief that it was the situation that was causing the rift: his moving into a house with undergrad boys where we had little to no privacy, or his increasing absences for out-of-city cricket matches, or his unwillingness to study together like we used to in our first year. These were excuses I made for our relationship, and for him. So perhaps, asking him to be my photographer was my way to test this theory. To spend more time with him, and to bond in the process.

And for the most part, it worked. We would schedule meetings for fashion shoots, and he would show up diligently. After, we would go out for dinner, or watch a movie, and spend the night together.

The first shoot was on Valentine’s Day, an unusually slushy wetness coating the streets outside the house where I rented a single room. We held the shoot indoors. As someone unaccustomed to being in front of the camera, I found myself smiling shyly. Discomfort etched across my face, as I tried to make myself as confident as I felt when he looked at me in my Valentine’s outfit: a tight black mini skirt paired with a sleeveless black satiny top with lace frills at my arm holes and V-neck. An envelope clutch with dark orange and gold accents, matching the gold of my twisted neckpiece. I had left my hair open, the length of my curls stopping right above my breasts.

When British feminist film theorist, Laura Mulvey, theorized the male gaze, I wonder if she was thinking about the controlling gaze of the photographer. Being in front of the camera was different from being behind it. There was a loss of control, as if I was putting my vulnerability on display without really wanting to. As someone who was used to being behind the concentric lens of the camera, rather than in front of it, I felt conspicuous, my body on display. A doll-putul, like my mashi would say. A made-up marionette for the sole consumption of the male eyes behind the lens.

When the cis-het photographer is also your boyfriend, how do you see yourself?

The first few shoots featured me in clothes that put my femme side on display: bright lips, mascaraed eyes, lacy dresses, tight skirts. Now when I see those photos, I see the discomfort, the uncertainly in the forced smiles, the awkwardness in my poses. I also see myself trying to inject comedy into the postures—sticking my tongue out, or pretending to be in a fight scene in a movie—to lighten the mood, so I could hold on to some semblance of myself.

As the blog posts changed from the conventional feminine dress-ups, I also recall the behind-the-scenes fights. With each fight, I felt myself falling away from him, and reasserting myself. With each fight, I felt myself choosing outfits that I wanted to, transitioning to an almost ideal version of myself, the version I really wanted to be. Pants, button ups, oxfords, neutral lips, and hair in a bun.

At a get-together with my gender studies buddies, one that he didn’t come to, I repeated an outfit: red pants, blue shirt, black boots, and a bow-tie. Everyone complimented me, as I relaxed into my clothes, a second skin. For the first time in a long time, my outer version felt like the way I imagined myself.

For the first time in a long time, I felt like me.

Genderqueer is a term I encountered within my gender studies classes. In my two years in the program at Queen’s, I would unlearn and relearn everything I thought I knew about gender and sex. That both gender and sex were on a spectrum. That the binary of either was an imposed illusion. That it was possible to feel like you belonged to neither end of the spectrum, or that you could exist outside the binary.

When I began fashion blogging, I found that my ideas of fashion and dressing up relied on my internalized ideals of this gender binary. That even as I found myself falling on one end of the spectrum, my inner self resisted and recoiled. These resistances came out through my fights with my then boyfriend, and through the ways I wanted to reimagine myself. And in this friction of wanting something and resisting impositions (however implicit), lay an inner struggle I had never quite had the language to articulate. Fashion blogging and my gender studies classes gave me that language.

As I came toward the end of my gender studies program, I began to identify as genderqueer. I found myself inserting the word silently into my writing bios as a gradual way of coming out without it becoming a spectacle. While genderqueer is often known as another term for non-binary, I felt this description fit me better. I was tired of defining myself and my body against the binary, and “genderqueer” felt just right.

In Camera Lucida, French literary theorist and philosopher Roland Barthes writes, “There is a kind of stupefaction in seeing a familiar being dressed differently.” Barthes writes this in the context of seeing a photo of his mother as a little girl, and finds that time collapses when he looks at the photograph after her death. In the same instance, his mother is both the little girl as well as his mother who passed away recently. He is essentially stupefied by this collapse of time.

Rifling through my fashion blog photos in the present time, five years after the blog’s demise, has this similar feeling of stupefaction for me. I am both in the present time and in the past, a bridge between my gender identities from then to now. There is a sense of disconnect between who I was in those photos and who I am now. While time doesn’t collapse for me in the way it does for Barthes, time does become malleable in the sense that I can stand secure in who I am now and who I am becoming, as I look back at who I was back then. I am still in the process of getting comfortable in front of the camera, but these days, it’s on my own terms. I am not who I want to be—yet—but as I hurtle towards the future, I feel myself getting comfortable within who I have chosen to become. And that, I think, is the beginning of everything else that is to come.