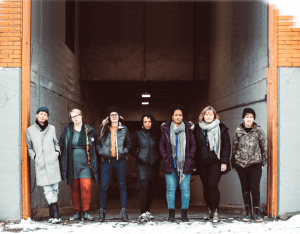 For 15 years, a group of volunteers has been lugging tote bags of books from their library in the north end of Halifax to the women’s side of the Central Nova Scotia Correctional Facility, or Burnside Jail, in Dartmouth’s Burnside Industrial Park.

The group is Books Beyond Bars, an anti-capitalist, non-hierarchical collective that runs a books-to-prisoners program. Every two weeks, a few members of the 14-person group bring a batch of new books from their offsite library and collect old ones, congregating in one of two meeting rooms on the women’s side. They also run a read-aloud program, where prisoners record themselves reading a story, which members then deliver to a young person in that woman’s life, such as a child, niece, or nephew. They also deliver a copy of the book to the child.

When they can hire an employee in the summer through the Canada Summer Jobs program, the group runs a writing program, too. According to Tiffany Gordon, a PhD student at Dalhousie University who ran the writing workshops during the summers of 2017 and 2018, anywhere from five to 10 people would participate, as well as the on-duty guard, on occasion. They produced a zine comprised of writing from the women in Burnside, Words Without Walls, at the end of both summer sessions.

Dalhousie Legal Aid had been donating some of its basement space to Books Beyond Bars since the group’s inception in 2005. The space served different purposes for different groups: it was an open area with someone’s office in the back, and included a spot where law students working with legal aid would meet and work on cases. Books Beyond Bars had bookshelves in varying states of disrepair lining the walls. While the group was grateful for the space they had, they could only access it when the building was open, which meant they needed special approval to come in on weekends.

Nicole Maunsell, who has a master’s degree in library and information studies, got involved with the group in 2016 as a way to keep doing library work while employed in a different field. Her role at Books Beyond Bars is to keep their offsite library organized. In their space at Dalhousie Legal Aid, there were sections for fiction and various subcategories of non-fiction: First Nations and Indigenous studies; texts on religion and spirituality; dictionaries and writing techniques; Black studies; legal books, and books about prisoners’ rights, among others

In February 2019, the group had to find a new home. A building inspection determined the Legal Aid basement wasn’t safe and needed to close, a fate many Halifax organizations have faced before. Books Beyond Bars required a space big enough to hold its sizeable book collection, and accessible enough to make hauling those tomes in and out as easy as possible. After much searching, the group found their solution: a storage locker. With help from community members, they moved their operations into a north end storage facility outfitted with bookcases and decked out with lights and chairs to make it cozy. Once again, members were able to bring books back and forth from the jail.

Books Beyond Bars takes requests, and many that come in are for fiction. But another common request the group receives is for legal books—texts that might help women prepare for their trials.

“We’re an abolitionist organization, and we look at what we do as solidarity work, not charity work,” says Maunsell. She explains that, to the group, solidarity work looks at systems like capitalism, racism, and ableism, and works to resist them.

Even though the group believes in prison abolition, Gordon thinks Books Beyond Bars can still make an impact from within the carceral system.

“If there are programs that women need, we can still go in and facilitate those, because they’re necessary,” she says.

The work Books Beyond Bars does is an exercise in balance: they must work within the system they’re trying to dismantle. When Gordon ran writing workshops, she wouldn’t bring material concerning prison abolition. “It’s just not the right context for that, right? I’m in a jail, the program is conditional,” she says. “I’m not in there to critique the entire system.”

“It’s work that we’re doing for our community because we all believe in it and believe that it’ll make our communities better,” says Maunsell.