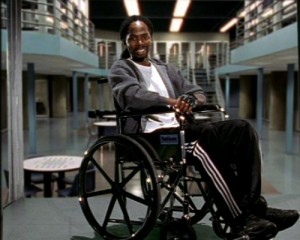 Augustus Hill had it easy. At least he had a wheelchair inside Oz. Real disabled inmates aren't so lucky. Image courtesy Home Box Office

If, as a disabled person, you think you’re still getting the shaft out in the real world, then you better thank the Lord you didn’t land in prison. Though twenty-five-to-life can be utterly soul-destroying for anyone, no one has it worse than the disabled inmates around the world.  For them, even basic human rights are hard to come by.

In 2008, the American Civil Liberties Union [ACLU] of Southern California and the Disability Rights Legal Center commissioned a study that found deplorable conditions in LA County jails.  The study found that disabled inmates struggle every day to overcome physical barriers to toilets, shower stalls and visitor areas, according to the LA Times. The study also revealed that cells for disabled inmates had broken plumbing, lacked natural light and had only limited access to recreational areas. LA’s disabled prison population is also limited in job and educational training, since those sections of the prison are often located in inaccessible areas. That wasn’t the worst of it. Disabled inmates, in sworn declarations, said they had their wheelchairs and crutches confiscated because guards failed to classify the prisoners as being truly disabled, thinking the devices were weapons As a result, inmates were forced to crawl around in their cells. The LA Times also interviewed a paraplegic man who asked to use the washroom while being booked on petty theft charges. The guards told him he would have to hold it because the washroom wasn’t accessible. The man eventually lost control of his bowels and was forced to sit in his own feces for six hours. The study prompted the ACLU and the Disability Rights Center to file a class action lawsuit against the LA County Sheriff’s Office for violating the Americans with Disabilities Act. As of right now, both organizations are still waiting for their day in court–a year later.

But abuse of disabled inmates is not limited to Los Angeles.  In  May 2009, The Independent reported that a disabled inmate, held at HMP Parkhurst on the Isle of Wright in the U.K., couldn’t clean himself for a year because staff outright refused to carry him to the shower, while another inmate couldn’t have a shower for six months because the three staff members who were “trained” to push his wheelchair were unavailable. The director of the Prison Reform Trust has called on the Ministry of Justice to comply with the Disability Discrimination Act and the director general of the National Offender Management Service acknowledged that the prison had “fallen below standard.” The general manager hopes a new management team and a redesign of the prison will help rectify the situation.

Canada is hardly immune. Though Canadian prisons are supposed to provide a basic level of medical care, 52%  of its institutional healthcare facilities failed to be accredited in 2006 because they didn’t meet basic standards. Failing to pass out all required medication at regular dosage times and failing to check insulin levels, were only some of the named offences.

Inmate abuse at such systemic and international levels is especially heinous given that many of the world’s prisons hold a disproportionate number of disabled inmates. In Canada, estimates put the number of prisoners with intellectual disabilities at almost 10% and those with learning disabilities at more than 55%.  I couldn’t find estimates for prisoners with physical disabilities. In the U.S., 40% of all people with serious mental illness are in jails and prisons, which translates to 10-30% of all inmates in the overall prison population, depending on the prison.

Essentially, this is re-institutionalization.  Prison guards are taking the place of  the attendant care staff that are often unavailable.  Also, assistive devices are often confiscated as weapons when disabled people are arrested and it can take a court injunction before inmates who rightfully need them get them back. The prison system in North America is already so overburdened and under-funded, regular inmates are sometimes housed in gymnasiums instead of cells and staff are grossly outnumbered.  If there aren’t enough resources for able-bodied inmates, it’s difficult to anticipate that anyone will give disabled inmates due care.

Still, someone has to wake up and put this pattern of double-punishment to an end. While able-bodied inmates are punished for their crimes and have to acclimatize themselves to the gangs and violence, disabled inmates are punished for their crimes and for being disabled. If prisoners are treated as the lowest class in society, then disabled inmates must be society’s pond scum.   It’s scary to think that in the 21st century,  a disabled inmate probably has a better chance dying as a victim of a neglectful judicial system, than an able-bodied inmate does from a shank to the chest.