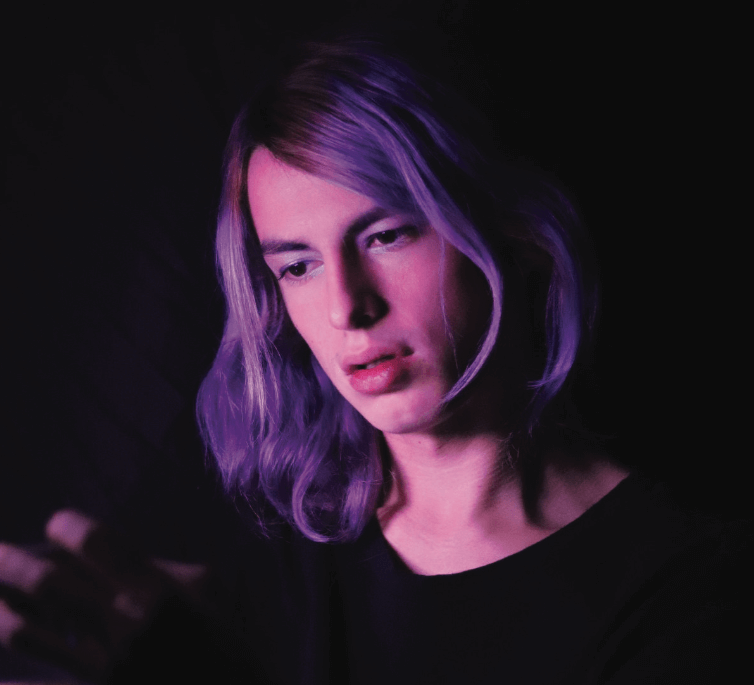 Genre hopping from ambient experimental electronics to hip hop, trip hop, R&B, and more, Ziibiwan Rivers is an electronic musician with a no-holds-barred approach to production. Beautiful and tension-filled soundscapes follow dense, calm, trap-inspired epics where land, sky, and deep sea meet. Ziibiwan is Anishinaabe from Wiikwemkoong, based in Tkaronto.

When I first heard Ziibiwan Rivers’s music, I knew immediately that they had a rare and profound talent. Their remix of Leanne Simpson’s Under Your Always Light remains one of my favourite tracks of all time. I’ve also been privileged to hear some of their new musical work and I’m confident that they have a long and critically rich musical career ahead of them. I wanted to talk with them about their experiences in music as a Queer/Trans/Two- Spirited (2S) NDN person because I think their work in music is an important part of the broader visibility and vibrancy of Queer/Trans/2S artistic work in the world. — GWEN BENAWAY

GWEN BENAWAY: What’s the relationship between your music and your experience of being an Queer/Trans/2S NDN person?

ZIIBIWAN RIVERS: I can’t say that my “released music” has been really considerate of my gender identity as much as I wished it was. I was just trying to survive in those moments but my previous release wasn’t embellished around gender or sexuality. After the release, I was kind of brought into this toxic masculine-dominated industry that I was quite oblivious about. I learned quickly that my acceptance of LGBTQ2S culture, that was nourished by my mother, wasn’t as welcomed by the general music community.

GWEN: Building on that idea about the toxic masculinity of the music industry, what was your experience like being a Queer/ Trans 2S NDN musical artist in a traditionally male-dominated music industry?

ZIIBIWAN: It’s soul sucking and incredibly toxic to the spirit; parts of my being dismount completely in this field. I’ve been backstage with “bros” who grossly display their insecurities with their masculinity by belittling anyone who is less manly than them. It’s really disappointing that the only positive experiences I’ve had in this field are from kwe (Indigenous women) who just look at you like a being that deserves respect. I don’t feel analyzed and observed by the fragile male gaze.

ZIIBIWAN: There are many people out there who I admire deeply and support me. I’ve been blessed by beautiful neechies reaching out and seeing me for who I am and providing me spaces to express myself. We are all carrying intergenerational trauma and ongoing attacks on our bodies and identities. For that reason, kinship with Queer/Trans/2S neechies has to be forgiving, compassionate, powerful, and community-based. We are all unfolding and actively working against a majority who project problematic views on us and who we should be. The conversations that take place within our community are frighteningly different from the conversations that take place by “bros” and for that reason, we need love, attention, leniency, and care.

GWEN: I really agree with everything you just said. I think it’s so important that we build care into our relations with each other. With that in mind, this is my favourite question to ask other Indigenous folks because it never gets asked by non-ndn folks (I’m assuming because they don’t care about our future or our optimism): What are you hopeful about in your life right now?

ZIIBIWAN: I’m excited for a fresh start and power to nourish our community in any way possible, within my emotional capacity. I just left a record label that was littered with abusive allegations and behaviours toward talented Queer/kwe. It has really corroded my spirit to be stagnant and complacent with people who never addressed or proceeded with genuine action to confront the issue. I want to do everything I can to lift and empower Queer/Trans/2s/ kwe artists.

This piece is part of a collection of works by trans and queer Indigenous writers and artists. Explore the rest of the feature: