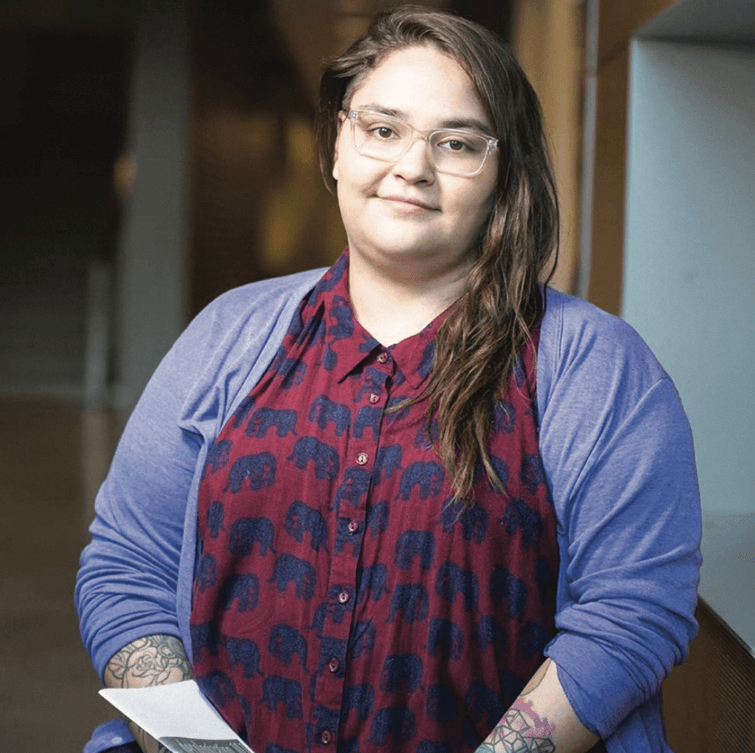 Lindsay Nixon is a Cree-Métis-Saulteaux curator, award- nominated editor, award-nominated writer, and McGill Art History PhD student. They currently hold the position of editor-at-large for Canadian Art. Nixon has previously edited mâmawi-âcimowak, an independent art, art criticism, and literature journal, and their writing has appeared in Malahat Review, Room, GUTS, Mice, esse, the Inuit Art Quarterly, Teen Vogue, and other publications. Their forthcoming memoir, nîtisânak, is to be released in September 2018 through Metonymy Press. Born and raised in the prairies, Lindsay currently lives Tio’tia:ke/Mooniyaang—unceded Haudenosaunee and Anishinabe territories (Montreal).

Lindsay sat down with guest editor Gwen Benaway to chat.

GWEN BENAWAY: You write and talk about the intersections of NDN Queer Trans kinship and how those forms of kinship are fraught with ethical complexities but also life-giving systems of defence against a murderous white cisgender/heterosexual (cishet) world. What do you see in your NDN Trans and Queer kinship that is life giving?

LINDSAY NIXON: Within my queer and trans kinship networks, we’ve created constellations of support in the cities we ran to, away from cis- and hetero-normative violence and relations. Some might call this a trauma bond, but I want to push up against that a bit. All of my Queer and Trans NDN friends are traumatized. Aren’t we worthy of love, of kinships bonds, regardless of the quality of care we can give or receive?

So much of being a Queer and/or Trans Indigenous person is helping one another stay alive day to day, and providing material and emotional support to one another. There’s also something about Queer and Trans Indigenous communities that is grounding of relation knowledges. For example, the spaces wherein I am having conversations around boundaries and accountability—
a loaded term I know—are Queer and Trans spaces, not often Indigenous spaces. Perhaps instead of accountability, I can just acknowledge the radical care I see embodied in queer and trans Indigenous ethics. This is not to be confused with superficial conceptions of niceness, any performative values, at that.
I mean the open, honest, and clear communication I see flowing throughout Indigenous Queer and Trans communities. It’s knowing that we are all going to fuck up and be messy, but committing to helping one another heal, and making work that heals that hurt.

GWEN: Is there an NDN Queer Trans philosophy to living? Or a commonality to our lives? I’ve heard you and [scholar and literary writer] Billy-Ray Belcourt discuss how being NDN and Queer/Trans is often rooted in a mythical past or impossible in the imagined future. I’m wondering: What are the connections you see in our NDN Trans and Queer bodies that reflect ancestral ties and imagine a future that are linked through Trans and Queer NDN realities? Or it is simply that we’re here as NDN Trans and Queer folks?

LINDSAY: My intent definitely isn’t to homogenize the Queer/ Trans, Queer-Trans Indigenous experience. In my work, I’m really careful not to reference a homogenized vision of “Two-Spirit
(2S)” that evoked figures like Whe’wa with voyeuristic and anthropological fascination. But I often think about all the activism that is held within Queer and/or Trans Indigenous communities, and the ethical ways of loving we speak about and make work centring on.

I used to feel dejected because of Indigenous governance. I didn’t see myself, or the work of other Queer and Trans thinkers, makers, and doers, in Indigenous governance departments, discussions, and projects. It’s hard not to feel like you are lifeless when even your own community doesn’t witness your spirit. Billy-Ray Belcourt is currently undertaking a survey of Indigenous/ Native studies departments internationally, looking into how many departments have Queer and/or Trans theorists within them. While his findings haven’t been made public yet, I think they will show that institutional Indigenous thought considers Queer and Trans intervention outside of itself or, at best, fringe.

First, there’s a great deal of gaslighting inherent in the argument that Queer/Trans folks are overstating their erasure, pushing out, and experiencing harm within larger Indigenous communities. Secondly, there’s a difference between dominant moods, themes, and peoples. Of course there were Queer/Trans people in previous generations of Indigenous thought, who I’ve done a great deal of work honouring and representing in my own work, actually. But we should also talk openly and honestly about the content that has dominated Indigenous theory, art, and literature for a minute. As David L. Eng might say, Indigenous thought has an aesthetic and it’s one tied up in issues resurgence, sovereignty, refusal, for instance.

Political theorist and writer Emily Riddle has taught me a lot about how governance doesn’t have to be limited to its nationalistic and masculinist version. Masculinist herein means dominated by men and theory by men, often preoccupied with colonial legalese and warring with the Canadian nation-state measured around the actions of men’s communities, erasing other facets of Indigenous community such as women, and Queer and Trans, spaces. Queer and Trans Indigenous peoples enact a different kind of governance in their actions everyday that is seldom talked about but which has been a powerful political and governing force in my life. We’re tired of being told that gender violence is secondary to Indigenous struggle, when we experience complex violences that we need to address to ensure our survival.

GWEN: What liberates you? What scares you? And what, in the face of colonialism and toxic masculinity, strengthens you?

LINDSAY: My kin! The future of 2S youth. My Queer and Trans teachings. Love. I know love gets a bad rap. But I’ve been in all facets of relationships defined through colonial language: triads, poly, monogamous, queer, lesbian, straight—you name it. What I’ve learned along the way is that there’s nothing inherently revolutionary about the way we fuck and are intimate. It’s the relationships, how we are in them with ethical actions (because fuck intention) that makes our relationships radical. I’ve gone to Queer play parties in Montreal that were poly run and supposedly consensual spaces, wherein I’ve witnessed rape. I’ve been in poly relationships that were some of the most abusive situations I’ve been in. I’m not talking about intimate touch, depersonalized action, and animacy removed from ethical entanglement. I’m talking about ethical love, as a philosophy.

All this to say, I stand by Queer NDN love as a philosophy and ethics, for living and relating. It’s what strengthens and liberates me in a world of performative politics and Indigenous identity politics, which are what scare me. They do nothing to ground that naturalization of Queer and Trans Indigenous death, but only feed individual ego, which is dangerous. As soon as we start saying that individual careers constitute politics, we remove Indigenous thought from action—from the streets.

GWEN: What are you hopeful for?

LINDSAY: Generational stuff is weird. I’ve gotten heck for calling this moment a gay renaissance but it’s not just in the Indigenous community. Queer and Trans content is suddenly everywhere. Artists like Janelle Monae, Hayley Kiyoko, Kehlani, and Demi Lovato who are making work that’s like, men (patriarchy) are (is) trash, we know this. So let’s “fuck it all back down,” to quote Monae. What more exciting is that this seems to be a moment resoundingly by and for femmes. Of course, visibility does not make us safer— perhaps the exact opposite. But it still feels meaningful to see
pop culture represent your futures, when you grew up with representations that showed you you perhaps didn’t have one.

But I don’t want it to seem like I am being devaluing of the important role Trans-masculinities play in our communities. Artists like Fallon Simard and Lacie Burning have shown that Indigenous Queer and Trans peoples are already leading Indigenous futures with their progressive organizing and activism, and associated backgrounds in queer anarchist and anti-capitalist politics.

We can’t be so reductive as thinkers and makers that we don’t recognize generational distinctions. We’d be remiss not to say that this generation is one that has proven themselves fed up with misogyny and gendered violence.

This piece is part of a collection of works by trans and queer Indigenous writers and artists. Explore the rest of the feature: