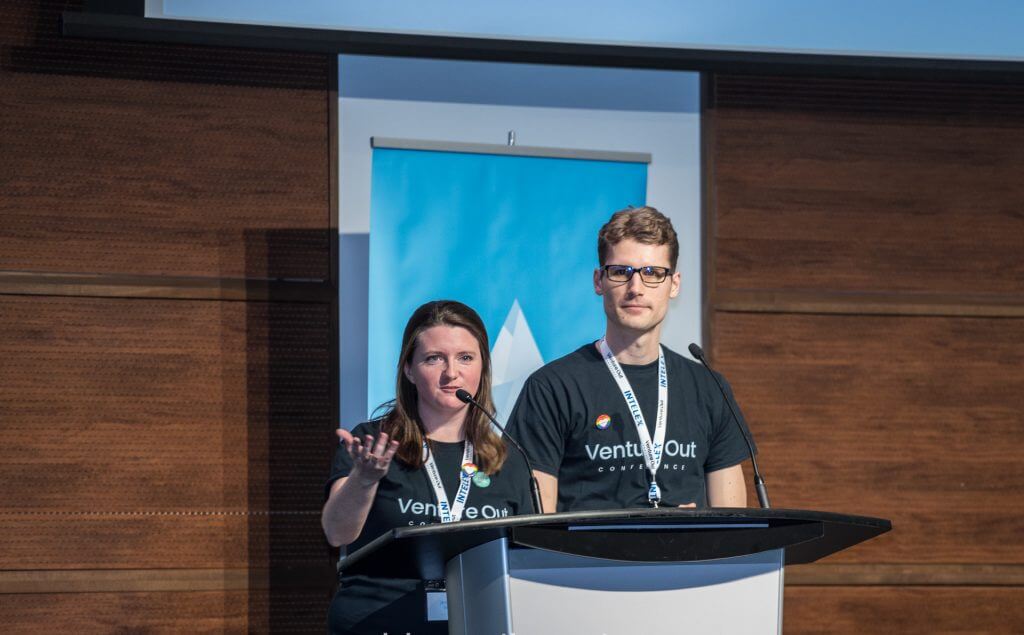 As a queer young woman fresh out of university entering the workforce, Jeanette Stock had several challenges to navigate. “The biggest barriers were my own about me being queer. I had never been schooled in workplace 101 on being queer,” says Stock. Challenges included coming out at work and getting comfortable with speaking about her personal life. Despite coming out at work early in her career to a boss who made no issue of it, it was one of the scariest things she’d ever done. “My boss asked me if I was seeing anyone or what I had done that weekend,” Stock says. She remembers pausing for a beat. She considered avoiding having to disclose her partner’s gender by using gender-neutral pronouns, or simply referring to her as a friend. At the end Stock decided to disclose. “The second between disclosing and her nonchalant response felt like an eternity to me, even though it was a totally normal conversation,” she says. “The rest of the day was this weird mix of relief and exhaustion.”

Although Stock admits the barriers about her sexual identity were her own, she does agree that society contributes to the fear factor. “You can’t be what you want to be. I never really had any queer professional role models,” she says. But, she adds, LGBTQ communities need better and professional role models “so that people like me can say, ‘Okay, this is a piece of me that I can bring to my work.’”

While Stock was lucky that her company, Jack.org, was supportive of her queer identity, she noticed a lack of queer leadership in their senior management. Then Stock met Albert Lam and Stefan Palios at a StartProud conference, a pan-Canadian organization that’s been helping LGBTQ youth transition from university to the workforce for the past 10 years. They connected immediately over what they were wearing—jeans and Converse sneakers, unlike most attendees who were in bespoke suits. This sparked a “queer” predicament for the trio. “We were having a hard time connecting in our industry or space,” says Stock. “We’d go to tech events and there were potentially other queer people in the room, but it was hard for us to find each other. I was a part of these two communities—tech and queer—but they were separate.”

With a burning desire to integrate their two identities, Stock, Lam, and Palios founded Venture Out, a volunteer-run non-profit for the LGBTQ, specifically those working in the tech and entrepreneurship space, to create that much-needed intersection in addition to their nine-to-five employment in city startups. What began as an incubator project with StartProud became a two-day tech conference in Toronto’s MaRS Discovery District in March 2017—the first of its kind in the Greater Toronto Area.

“We realized a lot of LGBTQ students don’t consider startups as a career because they don’t see themselves as ‘tech’ people,” says Stock. “I didn’t even know there was queer female leadership at tech companies in Toronto until I joined.”

Achieving diversity and inclusion has been a perennial problem in tech companies. While research is replete and growing with statistics about the paltry representation of women in tech boards, statistics about queer folks working in tech in the country are hard to find. Most companies don’t report their diversity numbers, and in Canada, companies are not required to report on diversity. The companies that do often don’t report LGBTQ statistics.

Our technology landscape “is like Silicon Valley where hardly any of the founders or senior executives identify as a minority whether it’s gender, sexuality, or racial,” says Taylor Bond, chair and vice president at Venture Out. That there is a huge gap in the flow of funding and resources available for minority CEOs and executives to build and scale their startups is obvious. Venture Out helps plug that gap. The non-profit provides resources and insights to founders that are more diverse and inclusive in nature.

Venture Out challenges Toronto’s Silicon Valley lookalike, male, heterosexual bro-tech space. This is significant as, according to a 2016 report, for the first time 51 percent of people under the age of 20—those in Generation Z—reported being somewhere either on the gender or sexuality spectrum and outside the binary.

Attendees of the organization’s two-day annual conference in 2018 met and heard from noteworthy role models like Shopify’s Andrea Ross, who shared her experiences as an LGBTQ woman in the Canadian tech space; social scientist Kai Scott, who, as a trans man creates tools to help transgender employees and customers address exclusion; Canadian actress Natasha Negovanlis, who talked about leveraging technology to create queer representation within the digital space; and Dax Dasilva, CEO and founder of Lightspeed, among several others.

The organization’s speaker selection aims for more than 80 percent of speakers to identify as LGBTQ, within which emphasis and priority are placed on gender equity, racial representation, and trans representation. To represent the 20 percent non-LGBTQ allies, invitations are sent to tech leaders who have a track record of implementing initiatives and teams that are LGBTQ and minority positive. “We’ve always welcomed allies for panel moderation,” Bond explains. “As moderators our allies acknowledge their position of privilege in a room full of minorities and are giving a voice and platform to underrepresented groups.”

Complete with TED Talk-style fire-side chats, pitch competitions, workshops, and a hackathon, Venture Out’s presentations had what most tech conferences lack: they had heart. Personal stories of LGBTQ role models’ triumph over exclusion from workplaces resonated equivocally with audience members.

“I think it’s amazing that there’s a tech conference specifically for us queer folks and that there are this many of us in tech Toronto,” says Tiffany, a 2018 attendee. “There aren’t a lot of visible or out queer people in my company, so I heard about Venture Out through word-of-mouth within our queer community. It’s a powerful experience for me to be in a room full of people who are likeminded and face the same issues within the same industry,” says another attendee.

With ticket prices not exceeding $50, inclusive of three meals per day, Venture Out stands in stark contrast to what Canadians identify as a tech conference. Even though the organizers admit that they are in an “eat-what-you-kill” stage, they are breaking systemic barriers to create a community of resources and mentorship for LGBTQ communities, and for other racial minorities, as well.