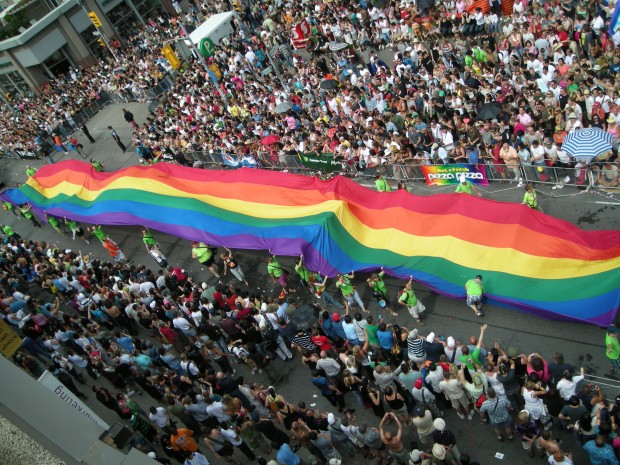 Toronto’s LGBTQ community is gearing up for what is set to be another successful Pride Week in the city.

The event  has taken place in various forms since the late 1970s and has run annually since 1981. It continues to grow increasingly popular within the LGBTQ community, but also with all members of society. Last year more than 1.2 million people attended Pride Week celebrations. With luck, we will also see many of our leaders out at events and parades in support of the LBGTQ community across the country.

So, yeah, while it’s true that Canada has not always been as accepting as we’d like, or hope, we have done some awesome stuff. And, it is important to celebrate the positive strides that Canada has already made and to continue to show support and push for an even greater country—one, for instance, where someone’s sexual orientation is not a deciding factor in marriage and parenting.

In honour of Pride’s celebratory vibe, let’s take a look at the rights fight, and wins, in our history:

Our first push for better LGBTQ rights, dates back to the 1960s. During the Trudeau era, the then-prime made what might be considered one of the first political steps for gay rights in Canadian history. He famously stated: “there’s no place for the state in the bedrooms of the nation,” which lead towards the decriminalization of homosexual acts in Canada.

In December of 1977, Quebec became the first province to include sexual orientation in their Human Rights Code. The law made it illegal to discriminate against gays in housing, public accommodation and employment.

Today Cananda has a total of six gay Members of Parliament: Randall Garrison, Dany Morin, Philip Toone, Libby Davies, Scott Brison, and Craig Scott. This may not have been possible without the likes of Svend Robinson, of the New Democratic Party, who, in 1988, became the first Member of Parliament to publicly state he was gay. Robinson was first elected to the House 1979 and was re-elected on eight separate occasions.

Another prominent figure in the gay community is Glen Murray. From 1998-2004, Murray was mayor of Winnipeg, making him the first openly gay mayor of a major city Canada. He is currently an MPP in Toronto and Minister of Training, Colleges and Universities.

In 1996, Canada took another  major step forward when it comes to recognizing the rights of the LGBTQ community. The federal government passed Bill C-33, which added “sexual orientation” to the Canadian Human Rights Act. In 2002, for the first time in our history, a Canadian court ruled in favour of recognizing same-sex marriages under the law. The Ontario Superior Court ruled that prohibiting gay couples from marrying is unconstitutional and violates the Charter of Rights and Freedoms. British Columbia followed in the path of Ontario in July of 2003, legalizing same-sex marriages.

The attitudes on Parliament Hill have continued to shift in greater support for the rights of the LGBTQ community. Most politicians today no longer view this topic negatively, or in the equally harmful don’t-ask-don’t-tell light of our not too distant past. Even Conservative Prime Minister Stephen Harper stated a few months ago that his government has no intention of revisiting the issue of same sex-marriage in Canada—likely because the tide of public support for same-sex marriage has become so strong here. Harper’s statement followed a submission by a government lawyer stating same-sex marriages that were performed in Canada for non-residence couple were not valid. This attempt sought to highlight various loopholes in the Canadian system which could have prevented individuals from other countries from becoming legally married in Canada.

Governments, such as the Ontario Liberals, have also recently stepped up in the fight to defend gay rights in our schools and are helping to change attitudes across the board. Last month, the government passed a bill—seen as controversial by many, especially those in the separate school board system—as part of the anti-bullying crusade taking place across our country. The Accepting Schools Act will allow students to establish gay-straight alliances, or any other groups of this nature, within the school as easily as they create a math or science club. It seems like a no-brainer: Life can be extremely difficult and confusing during our teen years; gay-straight alliances give any students a safe environment where they can share stories and make friends.

It’s a little strange when talking about LGBTQ rights in the same breath as the Conservative Party, but as our society continues to move forward, our governments must keep pace. During the recent video campaign “It Gets Better”—which was dedicated to Jamie Hubley, an Ottawa teen who took his own life last year, after enduring endless bullying for being gay—a number of Conservative MPs, such as Vic Toews, John Baird, and Rona Ambrose, appeared in the video.

Toronto’s Pride Parade is the largest event of its kind in Canada. In 2014 Toronto will be host of the fourth annual World Pride celebration. So, come out and take part in the various events across the city and join in the spectacle by showing you are one of the many supports of LGBTQ rights in Canada.