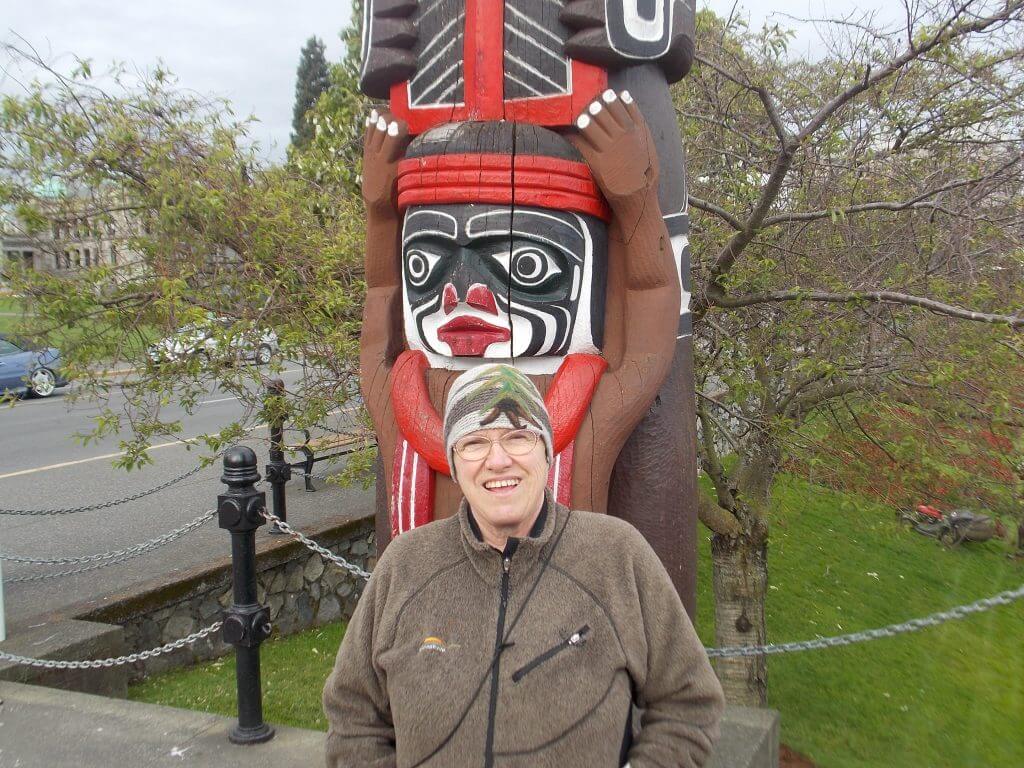 Half of the children in Canada’s foster system are Indigenous. For Inuit children, government care often means being relocated hundreds of kilometres south in total isolation from their family and culture. Siblings are separated, and contact to their communities and families in the north is limited.

Allies in the south can help magnify Inuit voices, and increase nation-wide awareness of the issues facing geographically separate communities. Lorraine Loranger is one such ally who has dedicated the last three years of her retired life to walking 8,000 kilometres across Canada telling the stories of our country’s Inuit. As a social worker in Nunavik, in northern Quebec, Loranger bore witness to the situation facing many families across Inuit Nunangat—Inuit regions in Canada, such as Nunavut. She is calling for culturally appropriate solutions, increased government support in the form of community-based safe houses or women’s shelters, and access to proper dignified housing for all Inuit.

In order to understand the issue, we must look to the past. Inuit lived nomadic, self-sufficient lifestyles for thousands of years. But, in the 1950s and 1960s, the Canadian government aggressively encouraged their settlement in permanent communities, promising housing, education, and health care as incentives. The Inuit slowly settled into sedentary lifestyles only to find government support aiding their transition fell radically short. Beyond issues of food security, housing has been lamented against as one of the most urgent crises facing northerners. Poorly constructed homes unfit for winter conditions are overcrowded and often dilapidated. It is common for families of 15 to 20 spanning four generations to live together in small three-bedroom homes. This can create unhealthy situations for many children, who are often removed by child services and sent into the foster system if the situation isn’t rectified.

These federal malpractices are what Loranger is fighting to change. She founded an organization, No Child Should Have to Take the Long Way Home, to support her 8,000-kilometre trek, which began on April 9, 2016, in Victoria B.C. She is currently in central Ontario with 2,418 kilometres left to go before completing her journey in late October in Ingonish, N.S. Along the way, she is working in partnership with Inuit associations, such as Saturviit, an Inuit women’s non-profit, to stimulate action to improve government funding in Inuit Nunangat.

“They lack access to justice,” she says of the families she worked with. “The children are being taken, and apprehended from their homes, and sent all over Canada.” Cramped conditions and a long history of systemic abuses exacerbate health concerns and domestic disputes for many families, necessitating child services involvement. However, once a child is removed from their family, it is almost impossible to bring them home. “They hardly ever come back,” says Loranger, “because the judge will say to [the parent], you have exactly one year from today to correct the situation… now nobody can correct the situation in a home where there are 20 other individuals.” Instead, families experience devastating losses of their children, and are often helpless to improve the situation with no means of accessing appropriate housing.

Children may also experience a great deal of instability after being removed from their homes. Loranger noticed the incredibly high rate in which children from the villages she serviced were being bounced around from placement to placement in the foster system. “When I worked there they had 96 kids [in the system] and out of 96 kids, 41 had been moved from 20 times to 56 times, all the other kids had been moved more than once.” It is facts such as these that Loranger uses as fuel on her mission.

She refers to her 8,000-kilometre trek across Canada as a “walk to talk, not a walk to walk.” It is not a continuous path from coast to coast; rather she is walking the distance while giving lectures in various communities as opportunities arise. Adding new companions this year, Loranger is now accompanied by her two Inuit marionettes, which she built with the help of some friends she met during her travels. “It’s going to bring more visibility to the project,” she remarks. The marionette duo is a fun tool that Loranger uses during her lectures to help highlight the Inuit perspective in her message.

Loranger’s speaking engagements serve a dual purpose: to raise awareness to the social issues facing Canada’s Inuit population, and to stimulate government action through citizen engagement. Last year, for example, she wrote letters to 300 of the people she met along her journey, “I asked them to write to their MPs about the situations that needed to be addressed in the north,” she explains, “such as housing, such as women’s shelters, such as protection of children in their own communities rather than outside their communities.” Putting pressure on members of parliament to bring Inuit issues forward to Prime Minister Trudeau is how Loranger is working to stimulate change in northern territories.

Her walk is coming to an end later this year, but Loranger has no intention of stopping her advocacy work. “I’ll continue working on the project, but I’ll be doing it sitting in a chair,” she says, “there has to be a lot more fundraising, so I’ll be organizing campaigns for the next few years.” In addition to fundraising, Loranger plans to write a book about her travels. In the end, she says, “It’s all to generate hope for the Inuit.”