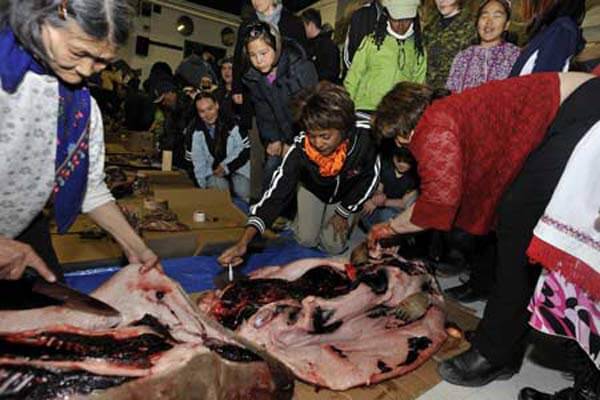 By now, you’ve probably heard about the Queen’s representative eating the raw heart of a dead seal this week. But there is more going on here than just heating up the old debate over the Canadian seal hunt — the news event continued a tradition of misleading the Canadian public about this issue.

General Michaëlle Jean’s legitimized the Canadian seal hunt this week by participating in gutting and eating the artery of a seal with Inuit groups while on a visit to Rankin Inlet, Nunavut. Jean claims this culinary experience showcased in front of national media was to assert Inuits’ rights to their cultural heritage. But is this really about fostering our multiculturalism?

But unlike eating a piece of raw fish at your local Japanese restaurant, there is more at stake here than a cultural experience. In a month when the European Union has banned Canadian commercial seal hunt products, it seems like more than coincidental timing for Jean’s “good-will” gesture. If anything, this act was a political maneuver, legitimizing the Canadian seal hunt on the grounds of cultural autonomy for suffering Inuit groups.

However, there is significant blurring of the lines between two starkly different industries: the commercial seal hunt in the east coast of Canada and traditional Inuit hunts in the far north.

The east-coast hunt consists of targeting 300,000 baby Harp seals in Newfoundland and the St. Lawrence Gulf annually for seal products like furs, pelts and extracts for Omega-3 pills. It is a commercial industry that hires 6,000 off-season fishermen and earns $5.5 million. In contrast, the Inuit hunt that has been practiced for over 4,000 years kills 10,000 Ring seals (a mere 3 percent of the industrial seal hunt) in the Northern territories. It is mainly practiced for food and the local economy.

“There is a difference in an indigenous culture’s right to hunt for food and economic survival, and the non-indigenous Newfoundlander’s massive slaughter of defenceless animals for profit and vanity,” says Patrick Doyle, CEO of NativeRadio.com .

Furthermore, the Inuit have been exempt from the EU ban while the east-coast hunt hasn’t. However, Inuit were exempt in the ban by European countries in the 1980s, yet they were still negatively affected. Which is something surely to be taken into consideration, more so by Canada than Europe. Nevertheless, there are important distinctions to be made in the Canadian seal hunt.

Almost no animals-rights groups are condemning the Inuit hunt — they focus their campaigns on the east-coast commercial hunt. And to suggest otherwise, as Jean has in defending the Inuit seal hunt as if these things are equivalent, masks these important distinctions.

But few feel anyways GG’s political feast will have any affect in swaying European opinion in changing its pace to Canada’s banning.

“The fact that the Governor General in public is slashing and eating a seal, I don’t think really helps the cause and I’m convinced this will not change the minds of European citizens and politicians,” Barbara Slee, an activist with the International Fund for Animal Welfare, told the Toronto Star.

But what this gesture does do is continue a kind of blackout for Canadians. It dupes the public about one of Canada’s great shames in the international sphere (next to the Alberta tar sands). It mixes up one of the largest mass slaughters of mammals with a culturally unique and comparatively small traditional hunt. They’re not the same.

Yet this story is the same old story; Japan too claims to be defending its “culture” with its annual Southern Ocean whale hunt of nearly a thousand whales, including endangered ones.

Governments cannot hide behind culture in the face of their own eco-injustice.