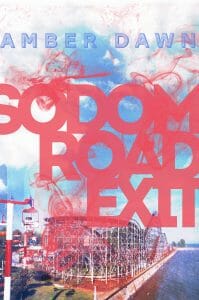 Returning to Ontario’s Crystal Beach after dropping out of university and accumulating a fair amount of debt in Toronto, Starla Mia Martin doesn’t plan on sticking around her birthplace forever. Her viewpoint quickly changes when she encounters Etta, the paranormal product of a tragic death at the recently closed and charred Crystal Beach Amusement Park. Together, they try to peel away at each other’s pasts and salvage what’s left of their personal ruins.

In a time where survivors’ stories are at the forefront of discussions surrounding sexual abuse, violence, and harassment, Sodom Road Exit speaks about the realities of trauma with honesty. Much like the ghost that is interested in Starla, trauma attaches itself to survivors and is with them every step of the way. In the book, the intimacy gained from sharing stories of trauma acts as a step toward confronting pain and healing. The friendships that are formed come from a sense of characters wanting each other to be whole—to be the versions of themselves that “could have been if pain didn’t happen.” At every opportunity Amber Dawn reminds us that Starla, as well as her newfound friends, are messy human beings. She also reminds us that in order to be a mess, one, at some point, must have been tidy.

The stream of consciousness Starla loses herself in is both terrifying and wonderful. When her thoughts mingle with Etta’s, it’s clear that Starla needs something to hold on to when things get tough. However, Amber Dawn clearly illustrates in her “lesbian supernatural thriller” that relying on others can only get you so far when it comes to your own well-being.