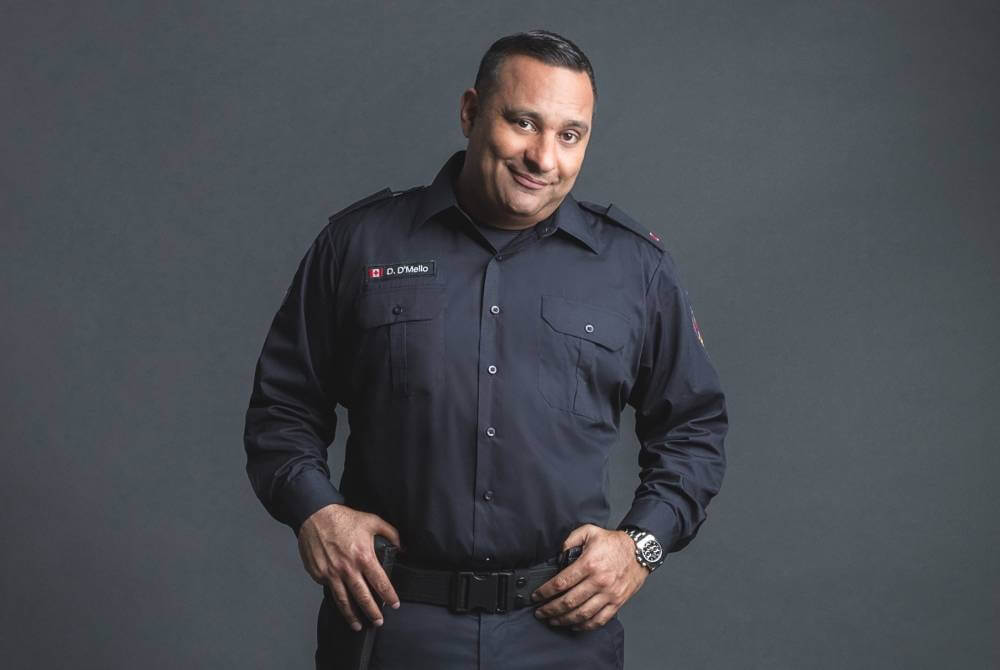 Russell Peters as Doug D’Mello in The Indian Detective.

Russell Peters’s much awaited return to television was finally satiated with the CTV show The Indian Detective, which aired last December. The sitcom has been five years in the making, and it’s a first for Peters, a Canadian stand-up comedian who began his career in Toronto. It tells the story of Doug D’Mello (played by Peters), a Canadian investigative cop who travels to India to meet his father and gets caught up in a criminal investigation. But the show has already received mixed reviews from audiences across the board. Reviewers have called it out for perpetuating stereotypes about India and failing to engage with its audience, both in Canada and abroad. The show received an overall rating of 6.6 on IMDB, although Rotten Tomatoes gave it a generous 87 percent.

Spread over four episodes, the series sought to set a new trend in Canada by internationalizing the setting of its production, with large parts of it being shot in India. The Indian Detective’s transnational location gets one wondering if CTV was hoping to create an international sensation, or at least engage with Canada’s vast multicultural population.

The show is the most recent addition to a short list of multicultural-themed TV programs produced by major Canadian public and private broadcasters, such as CBC and CTV. Canadian television, though, remains a limited-option entertainment platform that is often overshadowed by the U.S. With just over 58 percent of Canadian households consuming cable TV in 2016, the story of Canadian television programming remains rather humble. Its 2016 revenue was just over $7.2 billion.

Why aren’t Canadians watching traditional cable? Though there are technological and other reason for decline in cable subscriptions, one question must be considered: Who are the TV shows in Canada made for? If we were to look at the last 10 years of shows produced by two of Canada’s major broadcasters, CBC and CTV, they are primarily targeted to Canadians and Europeans. But Canada, the champion of multiculturalism, should prioritize TV programs with themes and characters that appeal to its vast multiethnic community, sponsored and produced by its public and private broadcasters. That doesn’t seem to be the case. Between 2007 and 2018, there were just three TV shows that focused on multicultural themes: Little Mosque on the Prairie, Kim’s Convenience, and now, The Indian Detective.

In the last three years, The Indian Detective and Kim’s Convenience have targeted a non-traditional audience within the Canadian media space, which could indicate a trend followed by other such productions. Kim’s Convenience, a CBC show that first aired in 2016, tells the story of a Canadian-Korean family and their convenience store in Toronto. The show portrays the city’s transforming multicultural community, and the family’s attempt to “fit in.” Kim’s Convenience explores the mores of the family-run convenience store, where you can find everything—jokes, too. The show plays out the conflict between the first-generation Korean parents and their kids who grew up in Canada without accentuating it with overplay of accents and cultural difference—something The Indian Detective banks on.

Canada has tried in the past to promote multicultural and multiethnic broadcasting by giving special provisions to the ethnic broadcasting category. The Canadian Radio-Television and Telecommunications Commission’s (CRTC) Ethnic Broadcasting Policy of 1999 decided to allocate airtime to television and radio shows in third languages—that is, any language that isn’t English, French, or an Indigenous language—over the mainstream. But the CRTC’s broadcasting policy only applied to ethnic broadcasters, and encouraged them to create content in third languages. The only policy for non-ethnic public broadcasters—the public and major private broadcasters—is to dedicate up to 15 percent of their airtime toward ethnic programming, and which could be increased up to 40 percent by the conditions of the licence. The provision to incorporate ethnic programming remains a minor part of the overall policy, which is strictly focused on promoting a siloed concept of multicultural broadcasting. The CRTC policy has been relatively successful at adding a small set of private stations that includes broadcasters such as Omni TV, a Rogers Media production. Omni TV is a consortium of multicultural television programming which offers speciality channels broadcasted in languages such as Mandarin, Cantonese, Tagalog, and Punjabi.

Specialized television satellite services such as Omni TV have been working hard to bring more multicultural TV options for Canada’s vast multiethnic population, but it is a small dent in the spectrum of broadcasting made possible by Canada’s public broadcasters such as the CBC. As a person of South Asian heritage, I consume media in Punjabi and Hindi, a large set of which is made possible by the CRTC’s funding for ethnic programming. Apart from a very small set of productions, most of it succumbs to advertisements by mortgage brokers, realtors, and real estate brokers—and some just roll all three into one program. The distinction between a news or current affairs program and an advertisement for a product or a service seems to blur into one long segment. Programming that was meant to promote a cultural dialogue between Canada’s vast ethnically diverse communities is being used for investment advice, for instance, in various languages. On the contrary, a successful example of multicultural programming is Hockey Night in Canada, which is a broadcast of hockey games with commentary in Punjabi.

In the United Kingdom, the BBC has long ago realized the need to incorporate multicultural programming, and has been promoting TV shows and media that appeal to its multicultural population on the British Isles. The BBC has a dedicated radio station for Asian audiences—the Asian Network—broadcasting throughout the day; the radio channels primarily cater to the U.K.’s large population of Asian heritage. A successful example of the BBC’s investment in multicultural programming can be traced through the career of Sanjeev Bhaskar, a prominent BBC presenter. Sanjeev is best known for Goodness Gracious Me, The Kumars at No. 42, India with Sanjeev Bhaskar, along with other regular appearances on BBC TV shows. He is among a long list of people of colour that have appeared on the network’s shows; other such figures include Mera Sayal, Idris Elba, Thandie Newton, and Gurinder Chaddha. The BBC’s production of multicultural situational comedy is well-established history that Canada could learn from. Some of the popular examples of multicultural comedy and drama from Britain include Real McCoy, Desmond’s, The Lenny Henry Show, Citizen Khan, and many others over the years.

Though multicultural programming options are thriving in Canada more than ever, it has resulted in a limited dialogue—broadcasting programs that many other Canadians can’t access, and vice-versa. But the recent productions of Kim’s Convenience and The Indian Detective are a positive trend that both major broadcasters should develop further. The CBC and CTV should rethink their strategy for Canadian television to remain relevant and keep up with the changing demographic of Canada. As the media landscape, both print and visual, faces its biggest financial challenge in years, there is a need to consider who consumes the TV shows and programs in Canada—and are Murdoch Mysteries or Heartland relevant to its multiethnic population?