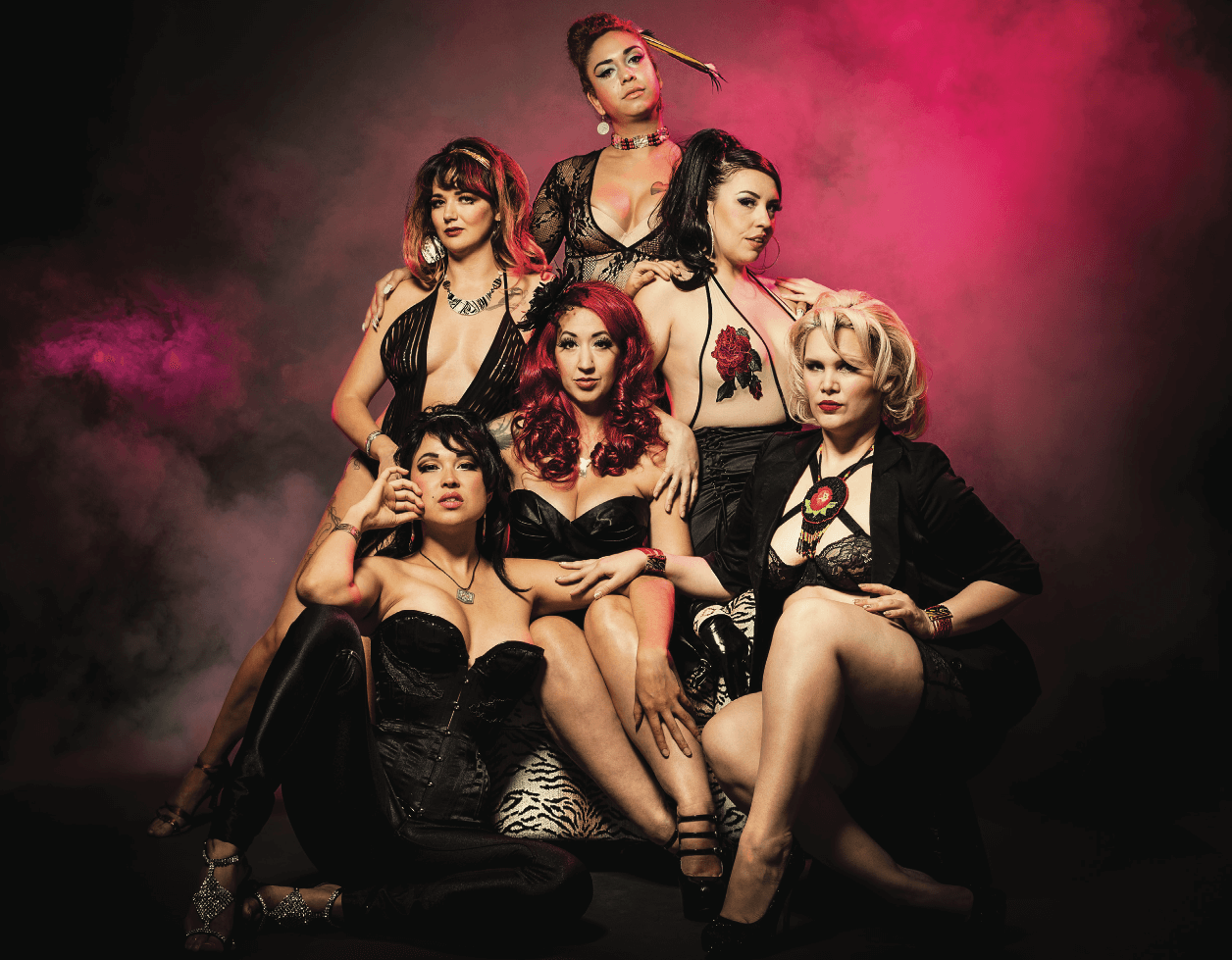 With the first chord of “Burn Your Village to the Ground,” the song accompanying a burlesque act titled “Not Your Stereotype,” a transformation begins. The figures on stage, dressed in racist caricatures of Indigeneity—feathered headdresses, wearing “Indian” Halloween costumes, carrying “Made in China” dreamcatchers—begin to shed their layers. The commodified image of the “Indian” is peeled away, and then the group performs a reverse strip, putting on new burlesque regalia to reveal their true identities. This is Virago Nation, Turtle Island’s first Indigenous burlesque collective.

Vancouver-based Virago Nation engages burlesque performance as a tool of reclamation. It’s through rematriating Indigenous sexuality and identity that community building, workshops, and performance are able to interrogate the racist, oppressive structures of colonization.

By using a colonial register of communication and culture—burlesque—to represent themselves publicly as Indigenous, Virago Nation enacts femininity and sexuality on their own terms. By archaic definitions, virago refers to a woman of “masculine strength or spirit,” or, a female warrior. Today, the term refers plainly to an ill-tempered, domineering woman. This shift in meaning—from one of female empowerment to one intended to strip agency—makes convening member of Virago Nation Shane Sable chuckle, because, of course, it’s all part of the fun.

Virago Nation formed in May 2016 when Sable, feeling uninspired and burnt-out in her work, wanted to build a community of support. She asked five friends to meet at the Heartwood Cafe, a now-defunct community hub for marginalized folks in Vancouver, for brunch. Sable invited everyone to introduce themselves while fully embodying their respective Indigeneity, approaching each other free and in spite of colonial expectations. But what first started as an informal group to share ideas and inspire one another became the formalized burlesque group they are today.

The collective uses each performance to leverage a calculated interrogation of the broader sociopolitical landscape in Canada. For example, they use what Sable calls “burlesque regalia”—ceremonial regalia adapted specifically for burlesque—as a tool in their performances to demonstrate postcolonial hybridity and identify each Virago’s heritage. By stripping off layers of costumes in their performances, they seek to strip the weight of the colonial gaze with conviction and freedom. In this way, the performances allow the group to participate in new cultural production while paying respect to traditional Indigenous art.

Virago Nation also offers workshops on pastie-making, burlesque movement, and other artistic skills pertaining to the rematriation of Indigeneity. By doing this, the group hopes to promote the art of burlesque as a tool of empowerment. “Because of the cultural genocide that’s taken place across Turtle Island, people have varying degrees of contact with their traditional cultures.” Sable says. “Burlesque can help bridge some of that lack of connection.”

Most importantly, Virago Nation strives to facilitate positive experiences for members of Indigenous communities, knowing the impact it may have on others’ lives.

“When we were in Las Vegas performing for the Burlesque Hall of Fame, we received a message from an Indigenous woman that said, ‘I didn’t know that I wasn’t alone,’” says Sable.

According to the group, this reaction—a feeling of sudden belonging, like finding one’s long lost family—comes up regularly, confirming the need for Virago Nation’s mission.

Ultimately for Virago Nation, it’s all about rallying for a return to pre-colonial matrilineal power structures and building a community that embraces the identities and supports the flourishing of Indigenous people, especially women, everywhere.

As for their next steps, Virago hopes to tour rural Indigenous communities to help share their positive representations of Indigenous women and to one day create an community where all Indigenous women can be Viragos. Sable says: “We want there to be others after—and alongside—us.”