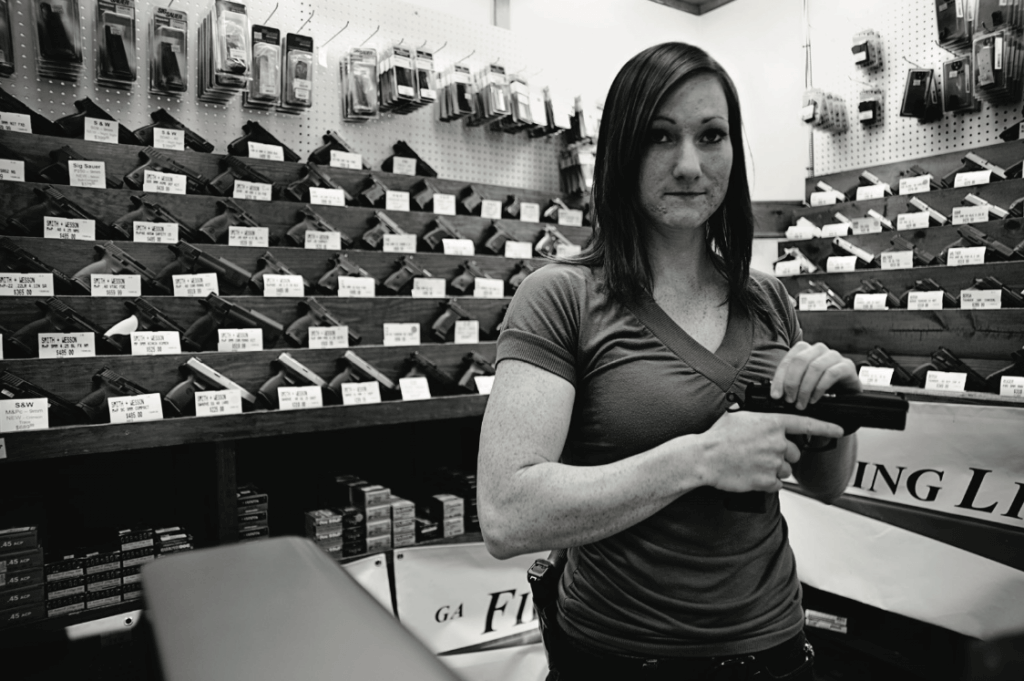 In the small town of Kennesaw, Georgia, law permits that each head of household must own at least one operational firearm with ammunition. Quebec photographer and filmmaker Nicolas Lévesque headed south in 2013 to meet the people of Kennesaw—many of whom were women. The result was In Guns We Trust, a photo essay and accompanying documentary about the politics of gun rights. Photo courtesy of Nicolas Lévesque.

A range officer waves me forward into the shooting bay. The semi-automatic rifle he places in front of me is surprisingly light in my shaking hands. “I’m probably going to get this all wrong,” I nervously shout, the only way to communicate thanks to the heavy-duty ear muffs strapped over our heads to protect our hearing. “Don’t worry,” he shouts back. “You’ll be fine.”

Once the gun is nestled against my shoulder and my hands are properly placed, my nerves suddenly fall away. I remind myself to lean toward the paper target dangling down range. Apparently, tilting back is a common rookie mistake, which some call the “the chick lean”—as though us fragile ladies retreat in fear of firearms.

I’m so focused on hitting the bull’s-eye, I no longer notice the burnt smell or hear the women on either side of me discharge their weapons. I pull the trigger, barely feeling the recoil or the brass casing fly out of the gun, joining hundreds of others scattered on the floor. Then I aim and fire again, feeling slightly more confident—and badass—with every shot.

Shooting off rounds of ammunition is not how this 42-year-old bleeding-heart liberal mom normally spends a Saturday morning. But this past April, I attended a “Guns and Gals” event hosted by far-right media outlet the Rebel in Gormley, Ont., about an hour north of Toronto. Part mixer, part fundraiser for the Rebel, the sold-out affair was the first of a cross-country tour. The web page, promoted to “freedom-loving females,” featured an image that played on the classic James Bond gun-barrel logo with the curvy silhouette of a woman in a pencil skirt and heels brandishing a rather large, hot-pink rifle where Bond normally appears.

I didn’t sign up to handle firepower, though. This was an opportunity to wrench myself out of my left-wing silo. Admittedly, I like the security of my warm and fuzzy social media feeds where my like-minded friends reinforce my opinions. Last fall, this echo chamber largely insulated me from the reality of the American election. I ignorantly took comfort in the Donald Trump bashing I saw on Facebook and held on to the hope that Hillary Clinton would prevail. When Trump became president, my love bubble burst and left me with a troubling thought: What if the far right is on the rise in Canada, too?

After an anti-Muslim demonstration took place outside a Toronto mosque in February, I decided to face my fears: I signed up for the Rebel’s email newsletter. I thought exposing myself to the far-right’s echo chamber might help me better understand them. If nothing else, I’d become more aware of Canada’s political spectrum.

Beyond content promotion, the Rebel’s emails were like personal letters, offering me concrete ways to get involved. After the Rebel’s U.K. host was arrested for contempt of court, for instance, I got an emergency request to sign a petition and help cover his legal fees. When this far-right group gets upset, it knows how to mobilize.

I had zero intention of responding to any appeals until the Rebel sent me an invitation for “Guns and Gals.” I immediately decided to go. Having once been an editor at Outdoor Canada magazine who covered hunting, I was familiar with the gun world. Shooting seemed like a suitable opportunity to actually spend time with the Rebel’s audience. But I was scared. The day before the event, the Rebel posted a video entitled “What is the Alt-Right?” In it, host Gavin McInnes angrily equated “left-wing spies” who infiltrate rightwing gatherings with followers of Hitler. I was terrified the “Guns and Gals” participants would smell my leftist views like a strong perfume and chuck me out.

“Just stay quiet and keep your head down,” I told myself.

“They’re going to hurt you,” my anxiety whispered back.

A smiling woman welcomes me at the door. She’s a more animated version of a Walmart greeter, showing me where to sign in and gather my complimentary pink camo T-shirt. While some enthusiastic attendees already have theirs on, I discreetly tuck mine in my bag. An Ezra Levant bobblehead grins at me from the merch table.

As we settle into a classroom, I count more than 30 women, ranging from their 20s to 60s. Some are solo and a few are with their male partners, but most are here with a friend, presumably for a girls’ day out. They definitely don’t meet my expectations: It’s an ethnically diverse group of friendly, chatty women, not the anger-fuelled vigilantes I had anticipated. Any of them could be my neighbour, relative, or even a friend.

Our group is the first of about six sessions, meaning about 150 women have paid $75 for a ticket. “Why are you ladies here?” Faith Goldy, one of the Rebel’s hosts, asks from the front of the room. (Goldy has since departed from the publication.) “Bucket list!” someone shouts. “My husband gave me a shotgun,” a woman at the front says. “So I could make a donation to the Rebel,” another quips.

“And how many of you have shot guns before?” Only a few of us raise our hands. Excited about how many female gun virgins are here, Goldy describes the wonders of shooting and the rise of North American women taking up the sport. In fact, just two years ago, the top shooter in Canada’s military was female.

Then she opens the floor to questions. One woman is curious about gun laws in Canada, to which Goldy explains the difference between owning handguns (restricted) and rifles or shotguns (non-restricted). Then she discloses her dislike of our country’s firearm regulations and concern that the laws will get even stricter. In her opinion, allowing concealed carry in Europe would solve the “terrorist problem.” Several women nod in agreement. Goldy encourages us to ask more questions—about anything at all, not just guns. From the back of the room, an elderly woman asks about M-103, which condemns hate crimes against Muslims. A lot of brows furrow. The Rebel has been vocally opposed to the motion, even starting a “Freedom to Offend” petition to try to stop it.

I do my best to follow Goldy’s explanation that M-103 is “Sharia creep,” a gateway for Pakistani laws to infiltrate Canada and an attack on free speech. “But what do we do now?” the same woman implores. (The House of Commons passed M-103 at the end of March.) Another woman informs the crowd that a protest will take place on Parliament Hill in early June. Goldy asks her to send the details so she can cover it.

My head hurts as I try to follow the comments bouncing around the room. I’m overwhelmed and completely out of my element. I’m thankful when the political discussion ends and an instructor comes in to give us some safety tips on gun handling before taking us to the range.

Afterward, as I walk back to my car, I feel a bit like those spent casings, not sure I’ve met my target. One day of shooting definitely doesn’t mean I fully understand people on the far right, but I realize this movement can’t be arrogantly dismissed by those of us on the left. If anything, we could probably learn a thing or two about translating ideas into action.

One thing I have noticed since “Guns and Gals” is a shift in my thinking: When someone in my social media feed makes fun of Trump supporters, calling them ignorant or stupid, I don’t snicker and keep scrolling. Instead, I cringe as I picture the ridicule directed at the women I met at the range. I feel like I can’t wag a finger at people on the right for stereotyping different groups and labelling them as “other” if I’m doing the exact same thing to them. These are diverse people with diverse backgrounds. They may not be my Facebook friends, but they are technically my neighbours and they seem afraid of losing whatever it is we have here in Canada. And to be honest, as I watch the far right gain momentum, I am, too.

UPDATE (October 10, 2017): The article has been updated from its original print version to reflect staffing changes at the Rebel.

Kristy Woudstra is an award-winning freelance journalist in Toronto. Her previous job in international development has fuelled her passion to cover social justice stories. Her work has been featured in Chatelaine, the United Church Observer, Canadian Living, the Walrus, and Today’s Parent.