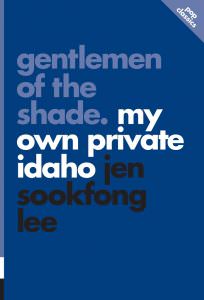 Gentlemen of the Shade: My Own Private Idaho
By Jen Sookfong Lee
ECW, $12.95

Jen Sookfong Lee’s Gentlemen of the Shade, the latest volume in ECW’s entertaining Pop Classics series, thoughtfully examines writer and director Gus Van Sant’s 1991 critically-acclaimed indie film My Own Private Idaho. Lee was a Doc Martens-wearing 15-year-old when she first saw the film, and her book wonderfully explores how the film “delivered the margins right into our mainstream lives,” providing a much-needed escape from Beverly Hills, 90210 and Boyz II Men. Lee perfectly captures the feeling of the pre-internet early 1990s and how My Own Private Idaho helped shape and define alternative culture, as well as influence the ideas and attitudes of a generation. Along the way, Lee explores the film’s relationship to pop culture milestones like Douglas Coupland’s Generation X, Milli Vanilli, Nevermind, Twin Peaks, and the volleyball scene from Top Gun. She also looks at how the subversive film contributed to discussions of sexuality, gender, identity and authenticity, as well as its influence on LGBTQ culture and cinema.