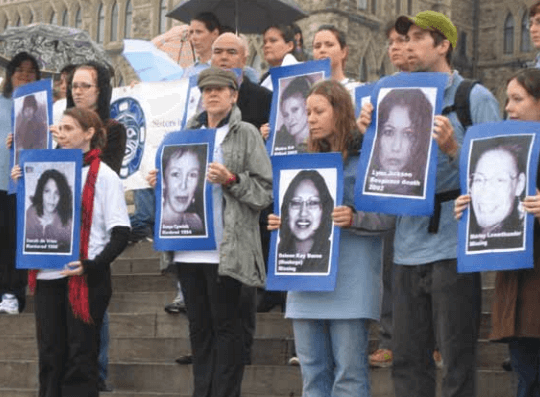 In 2012, the Sisters In Spirit Vigil in Ottawa asked volunteers to silently hold pictures of missing and murdered Indigenous women and girls. Photo courtesy of the Native Women’s Association of Canada.

For decades, Indigenous women in Canada have been resisting oppression. Canada’s institutions and systems, steeped in colonialism, racism, and sexism, have deemed Indigenous women as less worthy of raising their children, of having access to proper housing, income, or education.

Between 1980 and 2012, there were 1,181 police-reported cases of murder and long-term disappearances involving Indigenous women and girls, the RCMP revealed in a 2014 report. Patty Hajdu, then-minister for the status of women, has cited the research of the Native Women’s Association of Canada suggesting the number could actually be closer to 4,000.

These numbers reflect what the families of missing and murdered Indigenous women have been saying for decades: There are hundreds of Indigenous women and girls whose lives have been dismissed by the government, police, RCMP, and the media.

Manitoba in particular has had a longstanding issue with racism and violence. In 2014, the province had the highest documented number of homicides of Indigenous people and recorded the second-highest rate of hate crimes. A 2015 Maclean’s feature exploring the province’s race problem found only 13 percent of Manitobans had “very favourable” views of Indigenous citizens.

Canadian police and the RCMP also have a history of discrimination in their treatment of missing Indigenous women and girls cases. Poor report-taking, ineffective coordination of and between police, failure to investigate properly, and insensitivity are all common complaints from family members of missing Indigenous women and girls. Families are often made to wait up to 72 hours to even report someone missing—an arbitrary, unofficial period of time, rooted in the stereotype that Indigenous women are transient and unreliable.

When institutions fail to protect a population, it renders them vulnerable to the violence of people who know they won’t face consequences for their behaviour. This culture of immunity is what makes Indigenous women six times more likely to be murdered than non-Indigenous women in Canada.

Indigenous women have had to fight for their autonomy—and their lives—for far longer than this country has been called Canada. And that’s nothing to celebrate.

CLARIFICATION (JULY 31, 2017): This story has been updated to clarify that the estimated number of murdered and missing Indigenous women and girls is cited from NWAC research and not directly from former minister Patty Hajdu.