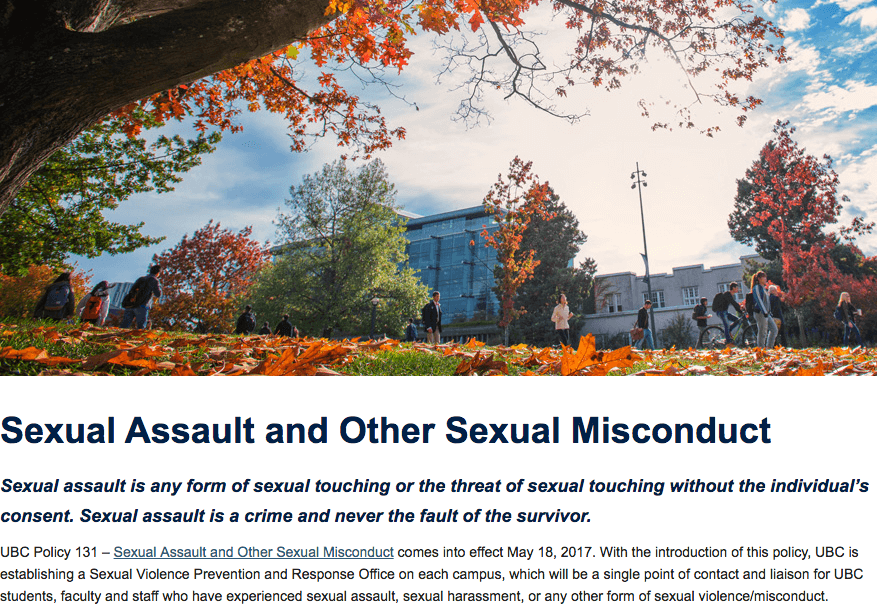 In April 2016, British Columbia passed a bill mandating all public post-secondary institutions establish policies for handling reports of sexual violence on campus. B.C. schools instituted formal procedures in May 2017, becoming the second province, after Ontario, to do so. This change follows a long pattern of dissatisfaction with how B.C. universities handle sexual assault claims.

The University of British Columbia was criticized for its treatment of sexual misconduct allegations that arose last November against Steven Galloway, the now-fired chair of the school’s creative writing program.

Two of the complainants, Chelsea Rooney and Sierra Skye Gemma, say the school did not adequately protect their identities or confidential testimonies, and that the investigation took a serious toll on their mental health. This, they say, gravely damaged their futures in the literary community.

Meanwhile, UBC graduate students Caitlin Cunningham and Glynnis Kirchmeier say it took the school more than 18 months to act on their sexual assault and harassment complaints about now-expelled Dmitry Mordvinov. The women say the delay put other students in danger, with six reports against Mordvinov accumulating in the process. Cunningham says she has “been more traumatized by the process of reporting than… by the incident of assault.” The pattern prompted Kirchmeier to file a human rights complaint in 2016 on behalf of anyone who has reported sexual misconduct to a west-coast university.

The cases led UBC to establish a new sexual violence policy, including hiring directors of investigations to review sexual assault reports and refer them to external investigators. But complaints of university inaction regarding campus sexual violence extend across the province. At Simon Fraser University, students say campus security ignored multiple reports of sexual harassment on campus in weeks prior to an assault in February. And at the University of Victoria, the school wrote one student a letter suggesting she not discuss the findings of the investigation into her November 2015 assault.

The efficacy of B.C. schools’ new policies will show with time. But there is still much work to be done—to create campuses where survivors are believed and protected, where their voices are not silenced, where they are not re-victimized in the process of reporting.