Earlier this month LA-based 90s treasure L7 played the Danforth Music Hall in Toronto. Named for one of the band’s more famous songs, a “Shit List” was made and displayed in the venue’s women’s bathroom. On this list were names of men who have assaulted women. The list came with extra paper and pens for people to add more names. Names included men from the music scene as well as prominent figures like university professors.

“The list exists as way to warn women that these are men to watch out for,” writes Toronto comedian Nick Flanagan. “Men living in Toronto, eating nice food, partying and enjoying life with their friends (maybe with you), living it up while having created awful feelings and memories in others with their actions. The only reason this became more than hearsay is because a photo of it was taken and shared on Facebook. You can say ‘where is the evidence?’ or ‘innocent until proven guilty’, but a community is different than a court. People can be acquitted from crimes for a variety of reasons, even if they committed the act in question. If bad behavior goes unchecked, it continues. And this goes way beyond ‘bad behavior’. Don’t excuse predators because they’re your friends. You have no need for a code of silence. You are not in the mafia. You are a barista.”

I think it is safe to say most people agree rape and other forms of sexual assault are wrong. Yet, this socially accepted fact seems to go out the window when the offender is someone we like.

June’s North by Northeast (NXNE) lineup for the Yonge-Dundas Square performance in Toronto did not include misogynistic rapper Action Bronson as originally planned.  NXNE was less than graceful in their statement, “We are not moving the Action show because we believe in censoring him or any other artists. In fact, we find the limiting of artistic expression distasteful.” The Change.org petition describes some of this expression in one of Bronson’s videos: “The artist cooks a meal over a woman’s dead body, rolls her up in a carpet, throws her in his trunk, and proceeds to violently stab her when he discovers she’s still alive.” Too bad for NXNE’s good time, community members were not OK with hearing rapey messaging. 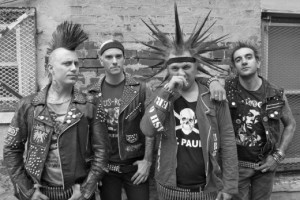 We’re now approaching the end of summer and punk band The Casualties had an unsuccessful Canadian tour. Many in the punk community know the lead singer, and only member of the band’s original line up, Jorge Herrera, as someone who’s been accused of sexually assaulting teenage girls. After one woman, Beth, came forward publicly via blog post, many others have shared their stories. “Incidents like this involving this dude have been sadly talked about since the late ’90s,” wrote one person.

Many venues cancelled their scheduled shows with The Casualties after communities stepped forward in protest. At least two venues continued with the show, but took The Casualties off the bill and donated proceeds to women’s charities. Such moves have prompted complaints from fans who believe they have a right to see the band play. See, for instance: “That’s your opinion, let me see my favourite band play”—as if human rights and rape being wrong is a matter of opinion.

In her post “I Won’t Apologize For Being Assaulted,” Beth writes:

“I totally bum people out because I happened to have been sexually assaulted by the singer of a band they like .. I know, I know. I should have tried harder for a band just begging to be rejected and ridiculed so it wouldn’t ruin your iPod rotation but hey, then again, it really wasn’t my choice. But man, what a total inconvenience to poor you to know something bad about a band you love. Just ignore the facts, I mean it WAS a long time ago. It’s not like I can still remember I was wearing cargo camo shorts and a v-neck white Hanes t-shirt… an outfit TOTALLY putting off do-me vibes with my freshly shaved head and not shaved legs.”

This story has also sadly resurrected the “But why didn’t she go to the police?” narrative. Yet, let’s remember that, asa YWCA fact sheet about violence against women reminds us, cases of sexual assault are among the most under-reported crimes—in fact, the majority of such cases go unreported. One of the reasons for this is because of the type of victim blaming that is currently happening. Another is the trauma victims are forced to relive throughout the court process. And while not every venue welcomed The Casualties, some continue to firmly support the band, like Toronto’s Virgin Mobile Mod Club. The show’s promoter, Inertia Entertainment, cancelled the show, but only after continued public pressure. The Facebook cover photo for the cancelled event was changed to a picture of a witch hunt. Inertia’s response on the matter continues to blame Beth, the victim, and calls her supporters illogical.

Sexual assault—rape—is still a disgusting and violent act even if someone popular and “cool” does it.

Beth, is celebrating her birthday by raising money for the Rape, Abuse and Incest National Network. You can donate here.