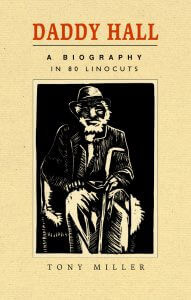 Daddy Hall by Canadian artist Tony Miller is a visual retelling of John “Daddy” Hall, a man who lived until the remarkable age of 117 in 19th-century North America. Hall was of Mohawk and African-American descent and lived through many historical events, such as the Underground Railroad, leaving behind a piece of fascinating history in Owen Sound, Ont. Miller’s linocuts are harsh in their black-and-white contrast, but they benefit the story of Hall’s tenacious journey in a land built on colonialism and Black and Indigenous slavery. The compelling images range from Hall in various forms of imprisonment and Indigenous communities fighting in the wars of the American and British. The mesmerizing linocuts communicate Hall’s unstoppable will to live and prove that while a picture is worth a thousand words, it is also worth a thousand emotions.