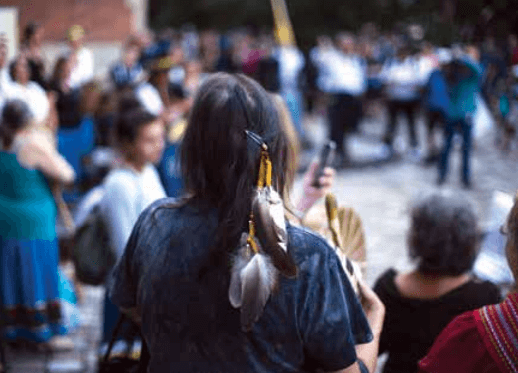 Photo by The Canadian Press/Michelle Siu

After decades of self-advocacy by Indigenous people, parts of Canada’s painful colonial legacy, such as residential schools, have finally been publicly acknowledged by the government. But the same government has yet to apologize for the Sixties Scoop, an era where thousands of Indigenous children were “scooped” from their communities to be fostered and adopted by white families. Since 2009, Ontario Scoop survivors have been battling the federal government to acknowledge the hardships they endured, and the government resisted. In February, survivors in the province were finally promised financial compensation. But other provinces across Canada continue to demand justice. Here’s a look at Ontario Scoop survivors’ arduous path toward reparation.

About 20,000 children, mostly from Ontario, are taken from their homes and placed with white families. They are given new names and stripped of their languages and cultural practices—a psychologically traumatic event for many survivors.

Ontario survivors launch a class-action lawsuit against Ottawa, resting on whether it was the Canadian government’s inherent responsibility to ensure these children were not deprived of their culture.

The federal government wins an appeal against conditional certification for the class-action lawsuit in divisional court. The ruling forces lead plaintiffs Marcia Brown Martel and Robert Commanda to pay $25,000 in costs.

Despite that setback, the case is approved as a class-action lawsuit.

The Court dismisses Ottawa’s appeal to scrap the lawsuit without a hearing.

Survivors are finally heard in front of a Superior Court judge.

Ottawa maintains that “while things might be done differently now, the government argues, no legal reason exists to apply modern standards to an approach taken decades ago.”

A lawyer for the government says the feds had no legal duty to prevent children from reserves from losing connection to their Indigenous cultures at the time. Another lawyer adds that even if the government was obligated to ensure the children remained connected to their cultures, Indigenous identity is too abstract to mandate this.

The federal government says it wants to settle the case out of court. The request is denied.

Superior Court Justice Edward Belobaba rules in favour of the Ontario survivors. He rules that the Canadian government “had a common law duty of care” to ensure children taken from the reserve maintained their Indigenous identities.

A new class action lawsuit begins for survivors afflicted by the Sixties Scoop in other regions across Canada.