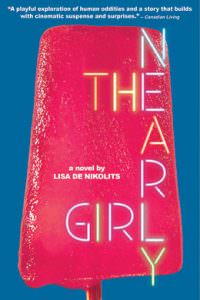 The Nearly Girl by Lisa de Nikolits is many things, but predictable isn’t one of them. Broken into a few chapters, The Nearly Girl tells the story of an unusual family, including a daughter named Amelia, who inherited her father’s peculiarities and is confronted with a grim reality when she is forced to deal with her issues.

De Nikolits’ novel reads like a movie. It’s fast paced and full of colourful, loud characters, but Amelia is certainly the stand-out. Her fascination with the unusually beautiful fuels her need to prove that she, like her father, requires an unorthodox way of living to truly be happy.

The Nearly Girl is brimming with bright story lines and vivid themes. The story becomes a commentary on life through the artist’s mind and the impermanence of happiness.