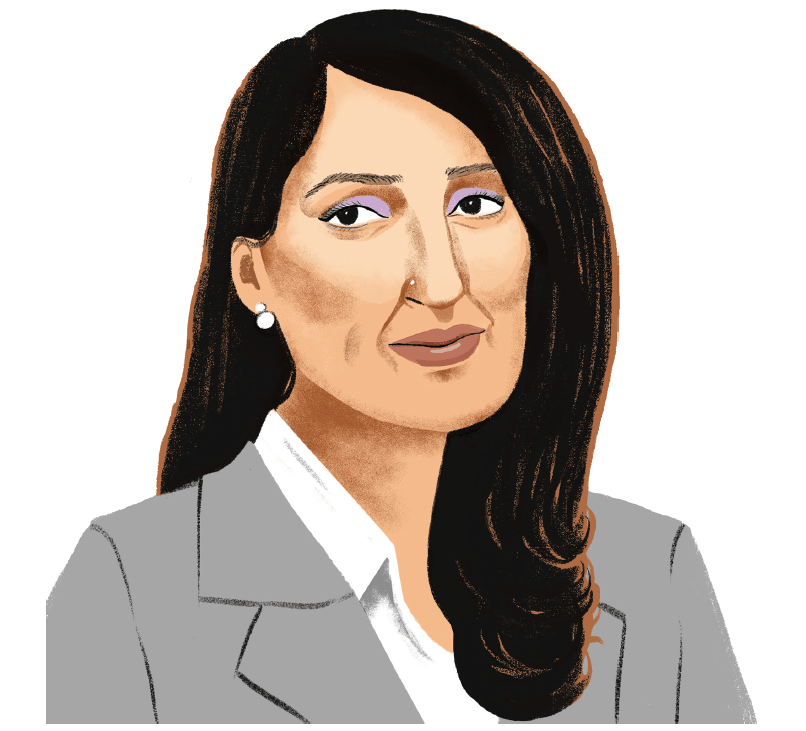 WHILE MOST PEOPLE’S FACEBOOK messages brim with congratulatory notes on the day of their graduation, Samra Zafar’s inbox was overflowing with two words: “Thank you.”

On Monday June 10, 2013, Zafar, then 30 years old, had kept her phone off for the duration of her University of Toronto graduation, where she was awarded top student in economics. That same morning, an article came out about her personal decade-long battle with and triumph over marital abuse on the Express Tribune blogs page, a major daily English-language newspaper in Pakistan. Unbeknown to Zafar, by the time she walked off the stage, a Bachelor’s degree in hand, women across Pakistan and beyond had read her reluctant in-depth interview and messaged the woman who had somehow broken the shackles of marital abuse.

One message stood out. A young woman in Waterloo asked to talk to her on Skype. She wanted to take her daughter and leave her abusive husband, but she was scared. “This was me five years ago,” says Zafar.

Back then, Zafar was on the brink of deciding whether or not to get a divorce from her husband, who was 12 years her senior. They had married in Abu Dhabi when she was 16 years old. Zafar’s workingclass parents had accepted his Canadian-based family’s marriage proposal so that their eldest daughter had the opportunity to pursue her dreams of higher education at a good university—something assured and supported by his family.

Instead, Zafar’s ticket to a successful education trapped her in decade-long nightmare with a husband who severely controlled and limited her life. She was not permitted to leave the house, had no cell phone, and only minimal contact with her parents—visiting them only when her father personally sent her and her daughter plane tickets. “I feel like I was in a prison for 10 years,” she says.

She had initially excelled at distance-learning education and when she turned 18 was accepted into the University of Toronto. By this time, she was also a mother. Her husband refused to pay her fees, and his financial status made her ineligible for government loans. She didn’t go.

Five years later, she was pregnant with her second daughter when her father died. After his funeral, she reluctantly returned to Canada. Her husband had begged and assured her that it would be different this time. The thought of leaving a relationship that was all she knew was “like jumping off a cliff and hoping there is a surface to land on,” says Zafar. Still, her father’s parting words to “take the fear out” became her driving force. “He always dreamed of seeing me at the top of a world-ranking university,” says Zafar.

In 2008, she applied to university again, and this time used money from her at-home babysitting job to help pay for tuition. “Going to school opened my eyes,” says Zafar, speaking of her time there. “I was being respected at school and that made me re-think my situation and question the way I was being treated at home.” Campus posters at the health and counselling centre prompted her to seek help. She would sometimes skip class just to hear counselling services tell her “it’s not your fault.” Yet, leaving her marriage was neither an easy path, nor a linear one. Her husband’s abuse increased proportional to her steps towards self-sufficiency—so much so that she stalled and dropped out of school, her self-confidence broken. “I used to ask him, ‘Why do you do this?’” says Zafar, “each time he said ‘because you deserve it’ and I used to believe him.”

But she kept focusing on taking the fear out and that, coupled with her older daughters’ insistence that “we will only be happy if you’re happy,” cemented her decision to leave. In 2011, Zafar separated from her husband and gave the police a detailed record of the abuse she faced. From there, without his income, she successfully reapplied to the University of Toronto and this time was granted financial assistance. Her husband was arrested on four counts of assault while Zafar excelled as a mature student, earning over a dozen awards for academic excellence, and getting admission into the Ph.D. program in Economics at U of T with a full scholarship. This was all accomplished while doing four part-time jobs. “The awards that I won reinforced my belief in myself,” she says, “and made me respect myself as a person and as a woman.”

Fast-forward to 2013, during Zafar’s meeting with the woman who contacted her from Waterloo. “I could complete her sentences,” says Zafar. For the first time in her life, Zafar felt hope and a complete sense of empowerment. “I felt like everything I had been through had a purpose, a meaning—to help other women realize their self-worth, break the cycle of abuse and pursue their dreams and potential,” she says. She helped the young woman to examine her options, to walk away from her marriage and to re-establish herself. She told her, “I’ll hold your hand anywhere you want to go.”

This instant connection formed the foundation of Brave Beginnings, Zafar’s non-for-profit mentorship program, to be launched this year. “What helps the most is talking to another woman who understands and can really help,” says Zafar, “I didn’t have that.” Brave Beginnings aims to bridge the gap between resources and the woman, to complement already established counselling services, and to take women out of what Zafar calls “their mental prison.” Once women reach out, they’re matched with a mentor in their area who will provide guidance, human support, and friendship. “We’re regular women who are passionate about empowering other women,” says Zafar. The question she wants us to ask is: How can we help her help herself?

“There’s not a one-size fits all approach,” says Zafar about the need for something like Brave Beginnings. “My dream is that every woman has the freedom to be who she wants be without any fear, without any judgement, and without any ridicule.”