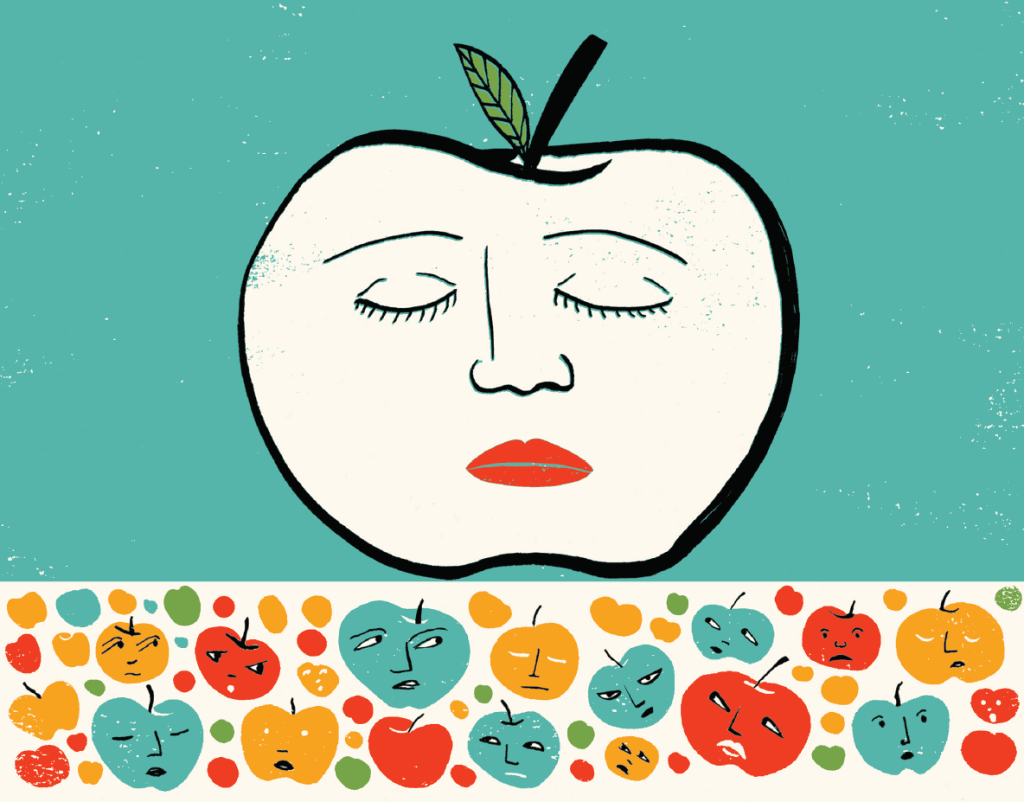 About five years ago, a rumour began circulating in South Korea that Indian and Filipino nationals might become eligible for E-2 English teaching visas. At this time, I had already been teaching in Korea for eight years on and off. It had been a wonderful resource for paying for backpacking trips through Asia and boozy Saturday nights out—never mind food, shelter, and clothing. Yet, while I knew there were likely millions of Asian teachers equally or better qualified than me, I feared an influx of new teachers would probably result in significant pay cuts and fewer job vacancies.

I needn’t have worried. In the end, as a long-time Korean friend casually told me, “Korean mothers want white teachers.” As a white Canadian it meant my job was safe—an uncomfortable relief, if there ever was one. Today, E-2 visas for Native Speaking English Teachers (NSETs) are still confined to Canada, the U.S., the U.K., Ireland, Australia, New Zealand, and South Africa. No matter how fluent your English, if you are not a national of those seven countries (or a Korean) you may not legally teach English in South Korea. Of the seven countries, Canada is the second most well-represented, after the U.S. In 2012 , 17.5 percent of E-2 visas were stamped in Canadian passports, representing about 3,500 individuals—the vast majority of them white.

Besides the right visa, the only requirement for potential hires is to have a four-year university degree in any subject. Though the market has tightened in recent years, jobs are still plentiful compared to home, with between 20,000–25,000 positions opening every year. Some teachers who travel to Korea are placed in public schools, but most—about two-thirds, according to a 2012 article in the Korea Times newspaper—teach at private, for-profit after-school academies called hagwons. They are usually placed there by recruiters, who work freelance and are paid by schools to find them teachers.

By far, the vast majority of those hired are white. It is Korean custom to include photos with resumes, making it easy to screen out non-whites—not to mention anyone who might be considered too old, too big, or insufficiently attractive. Education-obsessed Korean parents pay an average of $200 per month per student for English lessons at hagwons, though the fee often tops $400 , about the same as my share of the monthly rent and bills, or two weeks’ worth of groceries for a family of four. NSETs usually earn between $2,400-$2,800 per month, usually with free housing. Combined with low taxes and a marginally lower cost of living, it’s easy for a teacher to save up to $1,000 per month, plus a mandatory bonus, equivalent to one month’s salary, paid at the end of the contract—a tempting offer for any young graduate drowning in debt.

According to BBC News, in 2013 there were just under 100,000 hagwons in the country, with over three-quarters of Korean children reportedly attending one—not just for English, but for math, Korean, science, as well as non-academic subjects like martial arts, swimming, and piano. The best hagwons (meaning the ones with the most graduates attending top universities) are located in rich neighbourhoods like Gangnam, where real estate prices are through the roof. NSETs are hired because it’s felt their pronunciation is superior to Koreans’, but also because it’s prestigious to have a foreign teacher for your child—even more so if that teacher is white.

Like everywhere else, whiteness has a pedigree in Korea. I have never had to dig deep to explain “white privilege” to my students—they immediately understand what I mean. In 2009, for instance, a study at Ehwa Women’s University in Seoul (a university set up by American missionaries), detailed how Korean students were more likely to want to make friends with whites than blacks or Southeast Asians. And in 2009, Lee Incho, a professor at the University of Wisconsin-Eau Claire, published an article in the journal Language & Literacy, analyzing Korean English textbooks. He found the vast majority of artists profiled in the texts were white and Western, and only white and Western authors, in particular, were profiled.

Profiles of non-Western arts and artists included value neutral descriptions, rather than the glorious descriptions paid to Shakespeare, Mark Twain, and the ballet. “In addition to the continued recognition of education as a means for gaining more power, Koreans eagerly search for role models who have already achieved what they perceive to be global power,” Incho writes. “Koreans are eager to position themselves closer to these groups, as opposed to the non-West, the Periphery, or non-Whites.”

Nadia Kim, a Canadian-born academic at Loyola University in Los Angeles, argues in her book Imperial Citizens that it’s white North Americans who most convey the concept of advanced, global society to South Korea —Koreans who, only 60 years ago, were some of the poorest people in the world. Blacks, Asians, and others are perceived to represent the “backward” Third World. Kim writes that Koreans “have been profoundly affected by U.S. mass-media saturation, whether in the form of pro-military programs on American Forces Korea Network, Gone with the Wind, commercials for Uncle Ben’s rice, Mission Impossible III, Peyton Place, or CNN’s coverage of the 1992 LA unrest.” She adds that when mixed with Korea’s national myth of a single bloodline, many Koreans’ erroneous conclusion is that “real” Americans and Canadians are white.

Jenny Jackson-Smith, 40, is from Ottawa and black. She has always loved travel, and after completing a Teaching English to Speakers of Other Languages certificate, she decided to try her hand at teaching in South Korea. When dealing with recruiters, she was often asked to hide her race—or otherwise be told she couldn’t get the job she wanted. Recruiters weren’t happy when they discovered she was born in Bermuda, she says, and at least three asked, “Oh my goodness, are you a black person?” She could tell then that the interview was not going anywhere good.

Jackson-Smith did get a job (she doesn’t remember how long it took) but her first day at school was brutal. She’s not sure whether the school’s director knew she was black, or whether he thought she may be light-skinned enough to pass as white. Either way, when Jackson-Smith arrived, the director, as she puts it, “freaked out.” He commanded she not tell the children she was black, hoping apparently, that they wouldn’t notice. “I pretended that I didn’t understand him,” she says. “It pissed me off so much.”

A few months later, Jackson-Smith, returned from a vacation in the Philippines with braids and a dark tan. Even if she wanted to, she could not longer hide her blackness and phones at the hagwon were ringing off the hook. Parents wanted to know why they weren’t told earlier the teacher was “an African.”

Genny Vu, 24, a Vietnamese-Canadian from Montreal, estimates that for every job offer she received, her similarly qualified, white boyfriend would get at least three. “It usually started with one of us sending the recruiter an email with our information and it ended when we sent them our pictures,” says Vu.

It was once common to see recruiters advertising “whites only” jobs, but these are becoming scarcer, not least because the newest recruitment tool of choice, Craigslist, won’t allow them, per its terms of use. But recruiters say most schools privately ask for white teachers only. For the past four years, Jay Ahn has worked for a large recruiting firm, dealing with many of the large hagwon chains in Korea. He says most hagwons “pretty much demand North American, white-looking females, who are somewhat attractive.” If those requirements are met, often the hagwons won’t even ask for an interview. They will simply hand him a contract and say, “proceed.”

In the case of white males, he adds, a school will usually wait a few days, and then ask for an interview. If he sends an Asian or a black teacher’s resume, “most times they just ignore me.” He says hagwon directors twice questioned his abilities as a recruiter when he sent nonwhite teachers, asking “is this all you’ve got?” In one instance, Ahn sent a hagwon director a non-white teacher’s resume, and received no call back. Ahn then sent a white male’s name, and was told he would get a call back later. Then he sent a white female’s name and was called back in 30 minutes, with a request for an interview. It’s a common pattern, he says.

He says it’s the biggest hagwon chains that want the whitest teachers, because parents pay the most money to send their kids to those hagwons. While Ahn refuses to do so, he also says many recruiters will charge hagwons $1,300 for placing a white, North American female, but only $800 for a visible minority. Ben Glickman, CEO of Vancouver-based Footprints Recruiting, adds there are jobs for non-white teachers, if they are persistent. He says potential teachers should consider working at public schools instead of hagwons, since there is no profit motive at the public schools.

I repeatedly contacted five of the largest hagwon chains for comment: YBM/ECC, Jeongsang Language School (JLS), GnB, Avalon, and Chungdahm. All are household names in Korea, and together they run hundreds of hagwons throughout the country. I received no reply from any of them. However, the manager at one branch of Chungdahm was quoted in the Korea Observer, an internet newspaper, about a “whites-only” ad posted in March this year. “John,” who wouldn’t give his real name to the paper, confessed: “I am acutely aware of discrimination as I am a Canadian citizen. We cannot hire non-white teachers because we get too many complaints from parents.” He continued, “Hiring only Caucasians is not a rule but a common practice in Chungdahms as well as other language academies.”

Though it’s easy to simply categorize Korea as a virulently racist nation—as newspaper polls, dozens of academics, and even I have done—the racism reflects back on us, in Canada and the West. Koreans are acutely aware that whites continue to dominate top jobs in Canada and the U.S. They see minorities represented in the Western media as gangsters, pizza delivery boys, befuddled immigrants, or nothing at all. If Korean mainstream society embraces racism, it picked up on these racist cues from the West.

“I have a lot more forgiveness towards Korean racism than towards Canadian racism,” says Jackson-Smith. “The racism in Canada—Canadians often times don’t want to admit that it’s racism.” Just like in Korea, in Canada Jackson-Smith feels she’s black first and an individual second. Ziem Phala, a black Canadian who has taught in Korea for four years, agrees that in Canada, Canadian-ness often equals whiteness. “When people ask, ‘Where are you from?’ and I say I’m from Ottawa, the second question is, ‘No, where are you really from?’ Whereas no one is going to ask that of another white person, even if they’re straight off the boat from Italy.”

While looking for a new job, a black American friend of mine complained that he had never had to deal with discrimination like this ever before—and he’s from Los Angeles. But he admits that race is a tricky thing, and told me what is said out-loud in Korea is simply said under a person’s breath back home—or just shown on TV. Korea, a nation sealed off from the world only 120 years ago, did not develop its racism in a vacuum. It was imported, just like its English teachers.

Dave Hazzan was born and raised in Ottawa and educated at the University of Victoria and Athabasca University. He lives in Ilsan, South Korea, where he covers Korean society and culture for publications all over the world. In 2014, he was voted Writer of the Year for Groove magazine.Check out his webpage at davehazzan.com and follow him on Twitter @DaveHazzan.