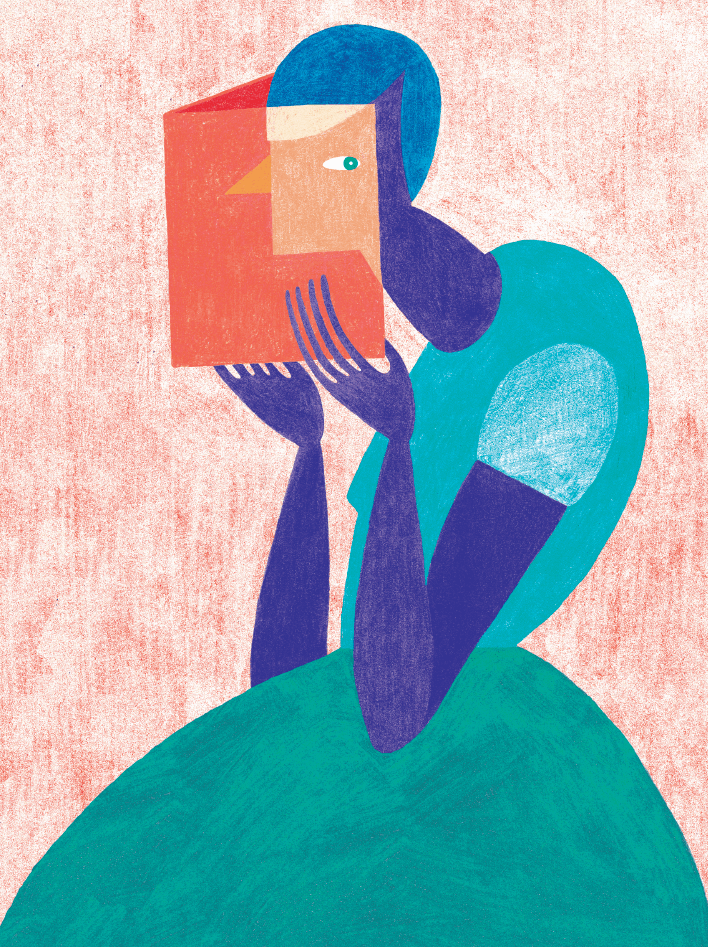 I don’t have much in common with Eminem, but I do empathize with these lyrics about his pre-rap battle jitters: “Palms sweaty, knees weak, arms heavy.” My body floods with this nerve-wracking discomfort in a space so many others navigate with ease: the rich world of academia. As a 23-year-old woman with extensive coursework in creative writing and a degree in health studies and gerontology, currently completing my master’s of environmental studies, however, I spend a lot of time wondering why I don’t fit in. After all, on paper at least, I have all the credentials. I have spoken at a variety of conferences on topics ranging from health to feminism to student leadership; I have taught inclusivity workshops at a university level; and I have been a teaching assistant.

Yet, every time I have to do one of these things or, worse, enter a classroom, anxiety rips at my seams. I drown in these academic spaces. I usually flounder for a bit, perform, gesticulate. I come out of whole courses gutted or beached, my insides left for the foraging of others within the institution. I know it’s because, as a woman of colour, I was never meant to thrive in many of these spaces. People like me are only truly welcome when our knowledge and lived experiences are there for others to forage. When, my peers can use me for their own curriculum vitae, proudly listing credentials like:
• Ally
• Culturally competent
• Intersectional feminist
• Trained in anti-oppression
• Applies social justice lenses
• And on and on

I want to love this list of buzzwords because in their simplest form they are meaningful and integral to an equitable society; good intentions exist at the core of this list. At the same time, I have a hesitancy to embrace them—especially when they have manifested into popular talking points for those in academia who are trying to stay relevant, employable, and in solidarity with social movements and interest groups. These conversations never carve away at how these “attributes” are too often attained by exploiting the narratives of communities, not through truly active and constant actions of solidarity. A seminar will not make a white person understand the totality of their privilege and a degree in social justice (yes, it’s a thing) will never trump lived experiences.

As more schools start to formalize social justice learning, those who have the mobility to attain a degree speak over myself and members of other minority groups engaging in advocacy work. I feel a gnawing hopeless despair when I see academia giving accolades, funding, clout, and respect to those who trade on outside knowledge, making a study of us—strangers penning dissertations on my community and others. How do we move forward with integrity within institutions that were never meant for us?

In September, I walked through a law school I was debating on applying to after I finish my master’s degree, scoping out its holistic application approach, hoping it translates onto the class composites. But nobody looks like me. I see a bunch of white men, followed by a block of white men and white women, and then just a few brown faces. Not many of them are women. Positionality makes us all see the deficit we relate to most. As much as I try to carve out space with other women in academia, I always come back to the nuances. Some women can be marginalized, yet more privileged than many others.

As much as I strive to knead at this sense of sisterhood in academia, white women are better positioned to shatter through the glass ceiling than many of us deemed “other.” We’re not all on escalators to the top; some us have to tediously climb up—exhaustion is inevitable and often so too is subsequent defeat. Academia could take a few pointers from the experiences shared on #solidarityisforwhitewomen.

I have two parents who did not finish high school, and university has been a never-ending struggle. My parents deeply value education, but can do little to help me navigate the system. When I had surgery in my first year of university, my parents didn’t know what advice to give. Where they come from, Morocco and Pakistan, a deferral even for medical reasons can result in expulsion. My parents also did not always understand extra-curricular activities, or the importance of presenting at conferences. They often do not understand my work and it breaks my heart.

I hesitate to explain that I craft papers to get the necessary marks for school funding. Or to say how, at home, we have shared labour and responsibilities rooted in cultural values. Many misunderstand when I say I have to help family; it is not a “choice” to sacrifice schoolwork but an obligation to those who lent a hand in giving me the life I have today. Explaining that I have filled out immigration applications and written letters for family is dismissed with “why can’t your parents/ aunt/uncle/cousin do that on their own?” Such tasks take time, but also energy. It is a learned social justice education. Not that I get to pad my curriculum vitae with the short-list of buzzwords.

To our detriment, we seldom talk about how we came to be at this place in academia—where some bodies seem meant to be in these concrete buildings and some do not. Too rarely do we talk about the racism and sexism that pervades these hallowed hallways. How, for instance, Oklahoma University’s SAE fraternity was recently filmed happily reciting a lynching chant filled with racial slurs. Or how, in September, posters for a White Student Union popped up around three Toronto university campuses. The latter group’s website features a mission statement to “promote and celebrate Western Civilization” and a bunch of other racist stuff. These groups should not be dismissed: the long history of exclusion still exists in present day. As much as institutions have worked to tweak and fine-tune panels on topics such as diversity, inclusion, and anti-oppression, these Band-Aid solutions miss the foundational problem that universities will discuss ally-ship, but not how we are accomplices to the system—talking about people who, thanks to systemic barriers, cannot be in the same classrooms.

Even when I know the coursework extensively and comprehensively, I walk into a space pondering its dynamics and all of the potential for harm. I daydream about how academia would work if we aimed for harm reduction in academic spaces with the clear knowledge that they are spaces where violence is inevitable. If we could preemptively equip professors and students with ways to combat micro-aggressions or conduct damage control. Where an entire academic system isn’t steeped in racism. I envision a future where when we discuss an identity on the margins we create a space where every student will learn. Because, right now, as it stands, when we have these discussions, it’s the most privileged amongst us who benefit, while the many students who are already marginalized are not able to learn.

It’s not as if the dominant academic culture doesn’t know these challenges exist. We often see tools, such as Peggy McIntosh’s famous “White Privilege: Unpacking the Invisible Knapsack,” used in progressive classes. But bearing witness to such scenarios—in which open-minded dialogue about race, class, and intersections occurs—is a largely stagnant experience for those who face the oppression. The first time I heard McIntosh’s list, I was in a first-year social work class that I thought would be an exciting elective.

I cringed as it was read aloud, point by point. My professor seemed to relish in the instant revelations of white students, telling them about her own experience grappling with the list as an undergraduate student. What manifests is white people and model minorities learning, while the rest of us hold our breaths. After this particular class, white students dominated the conversation, expressing feelings of guilt and surprise. Three years later, in the first and only woman studies course I have ever taken, a white student brought up how every time she reads McIntosh’s list she cries. Guilt with little action does not do anything. Unpacking the list for people of colour and watching white people express their guilt over it always feels like an out-of-body experience.

The 50-point list, if you haven’t read it, touches on points of privilege like, “I can, if I wish, arrange to be in the company of people of my race most of the time.” And, “I can easily buy posters, post-cards, picture books, greeting cards, dolls, toys and children’s magazines featuring people of my race.” Or, “I can choose blemish cover or bandages in ‘flesh’ colour and have them more or less match my skin.”

Many people of colour know these harsh points of privilege exist from as early as junior kindergarten, yet we pay the same amount of tuition to sit through classes, conferences, workshops, and training that all teach this list. It’s a list a white woman wrote, touted as a golden, comprehensive document—in itself about white privilege, and yet a white academic coined it, and gets the credit and monetary gain of its popularity as a teaching tool. Can we not use a racialized person’s work instead? Why are such attempts at diversity so blatantly half-hearted?

Whenever I get invited to be a token presenter at a university conference (usually on either religious identity, ethnicity, feminism, or all three), white people feel compelled to let me know they are “different,” how they “feel sorry for their people’s behaviour,” and how they “never thought about it that way.” Yet, would-be allies get very upset when people of colour or queer communities ask for identity-specific spaces. They don’t seem to understand we want to feel safer, that these safe spaces allow us to reach the heart of issues—like racial profiling—that we are all too familiar with. But we are not their specimens. They don’t get to use us as tools in anti-oppression training.

Currently, allies occupy opportunities that should belong to the “other.” But, I have hope for those working in solidarity with minorities. Diversifying more course syllabi is a start, but advancing equity in higher education also demands a few more actions. We need a critical generosity amongst peers and we need to create safe classrooms where we can have the much-needed difficult conversations.

Institutions that were not created for people of colour need to finally start consulting and listening to people of colour. We need to practice compassionate accountability and move away from an academic industrial
complex, toward a collective future. Emotional accountability to our peers is also vital. Often more privileged peers ask if they can “pick my brain,” but use my knowledge without credit, presenting it as their own. This invasive excavation of a life needs to stop. We need to strive for equitable learning environments.

How we all experience a space is different. Often defending our work becomes defending ourselves for many who are marginalized. For many it is never just an academic exercise. It is never just a project. We invest our stories, identities, and lives but also our communities. During my first master’s degree course this year, focusing on race, gender and the environment, a white man said his hope for the class was “to learn about white privilege.” I held my breath.

Nashwa is living and learning in the Greater Toronto Area. During her undergraduate career at McMaster, she served on Hamilton’s Status of Women Committee, McMaster’s Women and Gender Equity Network and chaired the Youth Advisory Council. Her work has been published in a variety of places including RH Reality Check LoveInshAllah, Coming of Faith and the HuffingtonPost. She is an avid storyteller, lover of narrative medicine and public health education. Feel free to tweet her @nashwakay.