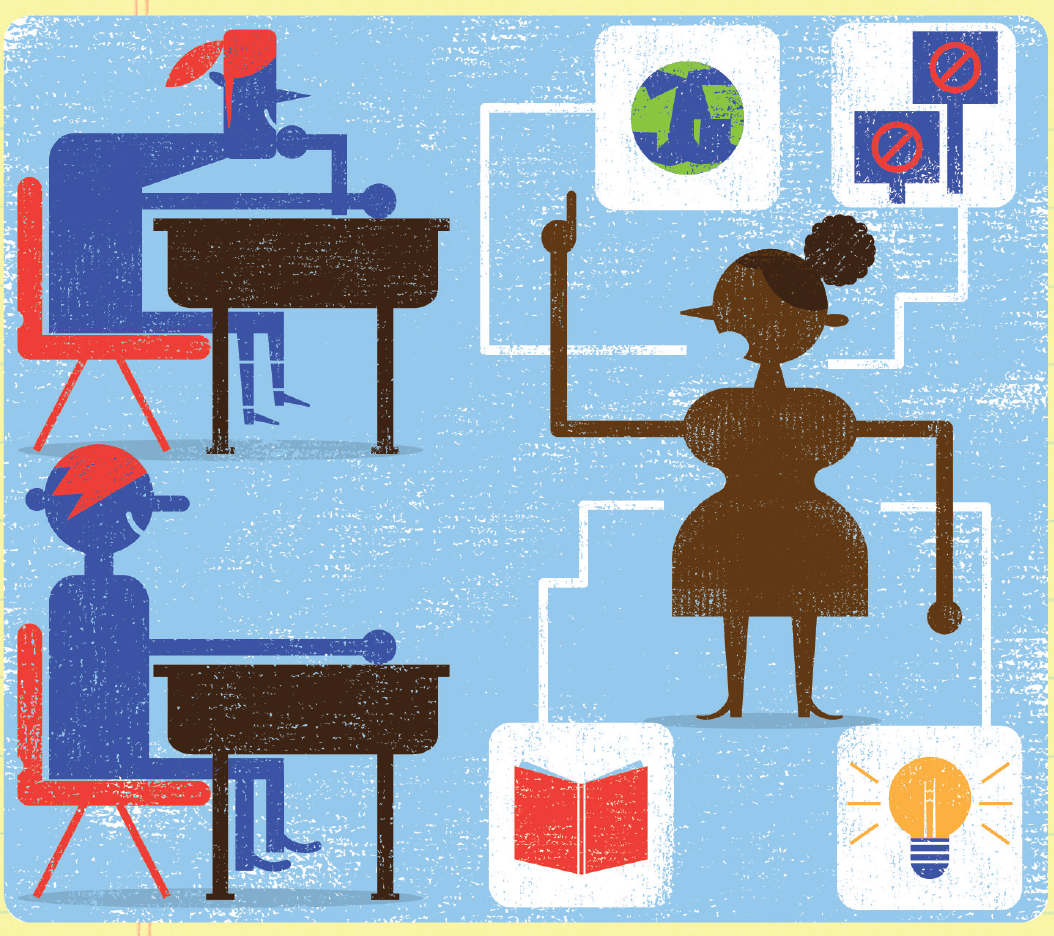 If students from a totalitarian nation were secretly transported to a Canadian classroom to continue their lessons with new teachers and a new curriculum, would they be able to tell the difference? I do not ask this question facetiously. It seems plausible that a good lesson in multiplication, chemistry, or a foreign language might seem equally at home in many parts of the world. The children in your local school probably learn how to read and write, just like students do in, say, North Korea or China. Students in your local school might learn to add numbers, do fractions, and solve algebraic equations. But that’s what students in Uzbekistan learn too. Maybe students in your local school learn not to hit one another, to follow the rules, and not to break any laws. They might sing the national anthem and learn about asteroids and the life cycle of the glowworm. I know of schools in Eritrea and Belarus that do those things too. So what would be different about teaching and learning in a Canadian school than in the schools of a country governed by a one-ruling-party dictatorship?

Do students in democratic countries like Canada learn how to participate in public decision making? Are they taught to see themselves as individual actors who work in concert with others to create a better society? Are they taught the skills they need to think for themselves and to govern collectively? Most of us would like to believe that they do. We expect that schools in Canada teach students the skills and dispositions needed to evaluate for themselves the benefits and drawbacks of particular policies and government practices. Democratic citizens should be committed to the people, principles, and values that underlie democracy—such as political participation, free speech, civil liberties, and social equality.

Yet, teaching and learning do not always conform to democratic goals and ideals. Research colleagues and I have conducted over the past decade reveals a clear and troubling trend: much of current education reform is limiting the ways teachers can develop the kinds of attitudes, skills, knowledge, and habits necessary for a democratic society to flourish. In fact, the goals of K-12 education have been shifting steadily away from preparing active and engaged public citizens and towards more narrow goals of career preparation and individual economic gain. Pressures from parents, school boards, and a broad cultural shift in educational priorities have resulted in schools across North America being seen primarily as conduits for individual success, and, increasingly, lessons aimed at exploring democratic responsibilities have been crowded out.

In many boards and provinces, ever more narrow curriculum frameworks emphasize preparing students for standardized assessments in math and literacy at the same time that they shortchange the social studies, history, and citizenship education. Moreover, there is a “democratic divide” in which higher achieving students, generally from wealthier neighborhoods, are receiving a disproportionate share of the kinds of citizenship education that sharpen students’ thinking about issues of public debate and concern. Curricular approaches that spoon-feed students to succeed on narrow academic tests teach students that broader critical thinking is optional. The last decade of school reform has seen education policy makers engaged in a myopic drive to make students better test-takers, rather than better citizens. A large number of public school teachers are reporting that disciplines such as science, social studies, and art are crowded out of the school day as a direct result of state testing policies.

As bad as that sounds, omitting lessons that might develop critical thinking skills is still different from forbidding them. Yet a number of examples of misguided education policy seek to do exactly that. Almost a decade ago, Florida passed a stunning piece of legislation that served as a clarion warning call to educators. The 2006 Florida Education Omnibus Bill included language specifying that “the history of the United States shall be taught as genuine history … American history shall be viewed as factual, not as constructed, shall be viewed as knowable, teachable, and testable.” For example, the bill requires that only facts be taught when it comes to discussing the “period of discovery” and the early colonies. Florida thus became the first state or province I know of to ban historical interpretation in public schools, thereby effectively outlawing critical thinking.

More recently, in fall 2014, more than a 1,000 Jefferson County, Colorado, high school students and hundreds of teachers walked out of classes to protest the school board’s efforts to promote “positive” American history and downplay the legacy of civil disobedience and protest. The protests came in the wake of a proposal by the school board to make changes to the Advanced Placement (AP) history curriculum. AP history, the board suggested “should promote citizenship, patriotism, essentials and benefits of the free enterprise system, respect for authority and respect for individual rights. Materials should not encourage or condone civil disorder, social strife or disregard for the law.” One Jefferson County teacher characterized the board’s proposal as “an attack on teachers and public education” while a high school senior vowed: “If they don’t teach us civil disobedience, we will teach ourselves.”

In Canada, too many schools have become oriented toward pedagogical models of efficiency that discourage deeper consideration of important ideas. The relentless focus on testing and “achievement” means that time for in-depth critical analysis of ideas is diminished. Current school reform policies and many classroom practices too often reduce teaching and learning to exactly the kind of mindless rule-following that makes students unable to take principled stands that have long been associated with democracies. Students are learning more about how to please authority and pass the tests than how to develop convictions and stand up for them.

Even when educators are explicitly committed to teaching “good citizenship”, there is cause for caution. My colleague Joe Kahne and I spent the better part of a decade studying programs that aimed to develop good citizenship skills among youth and young adults. In study after study, we come to similar conclusions: the kinds of goals and practices commonly represented in school programs that hope to foster democratic citizenship usually have more to do with voluntarism, charity, and obedience than with democracy. In other words, “good citizenship” often means listening to authority figures, dressing neatly, being nice to neighbors, and helping out at a soup kitchen—not grappling with the kinds of social policy decisions that every citizen in a democratic society needs to understand.

Commonly called character education, these programs emphasize honesty, integrity, self-discipline, and hard work. Or they hope to nurture compassion by engaging students in volunteer community service. What they don’t do is ask students to understand social, political, and economic structures or explore strategies for change that address root causes of problems. Voluntarism and kindness can be used to avoid much thinking about politics and policy altogether. Character traits such as honesty, integrity, and responsibility for one’s actions are certainly valuable for becoming good neighbors and citizens. But, on their own, they are not about democracy.

Former U.S. President George Bush Sr. famously promoted community service activities for youth by imagining a “thousand points of light” representing charitable efforts to respond to those in need. But if young people understand these actions as a kind of noblesse oblige—a private act of kindness performed by the privileged—and fail to examine the deeper structural causes of social ills, then the thousand points of light risk becoming a thousand points of the status quo. Citizenship in a democratic community requires more than kindness and decency.

Recall my opening question: If students from a totalitarian nation were secretly transported to a Canadian classroom, would they be able to tell the difference? Both classes might engage students in volunteer activities. Government leaders in a totalitarian regime would be as delighted as leaders in a democracy if their young citizens learned the lessons put forward by many of the proponents of character education: don’t do drugs; show up to work on time; give blood; help others during a flood; recycle; etc. These are desirable traits for people living in any community. But they are not about democratic citizenship. In fact certain ideas promoted by these kinds of programs—obedience and loyalty, for example—may work against the kind of independent thinking that democratic citizenship requires.

Democracy is not a spectator sport. Students don’t need to learn passivity, but rather that they have important contributions to make. There are many varied and powerful ways to teach children and young adults to engage critically—to think about social policy issues, participate in authentic debate over matters of importance, and understand that intelligent adults can have different opinions. Indeed democratic progress depends on these differences. If education policy makers, teachers, and administrators in Canada and elsewhere in the world hope to contribute to students’ democratic potential, they must resist the narrowing of the curriculum. And many do. In every province there are examples of individual teachers, schools, and sometimes boards that work creatively and diligently to keep their students thinking.

Approaches that aim to promote a “thinking curriculum” for both teachers and students share several characteristics. First, teachers encourage students to ask questions rather than absorb pat answers—to think about their attachments and commitments to their local, national, and global communities. Second, teachers provide students with the information (including competing perspectives) they need to think about subject matter in substantive ways. Third, they root instruction in local contexts, working within their own specific surroundings and circumstances because it is not possible to teach democratic forms of thinking without providing an environment to think about. This last point makes provincially standardized tests (especially in large provinces with both rural and urban settings) difficult to reconcile with in-depth critical thinking about issues that matter.

The exit of the Canadian War Museum in Ottawa, dedicated to a critical history of war, bears the following inscription:

“History is yours to make. It is not owned or written by someone else for you to learn … History is not just the story you read. It is the one you write. It is the one you remember or denounce or relate to others. It is not predetermined. Every action, every decision, however small, is relevant to its course. History is filled with horror and replete with hope. You shape the balance.”

I suspect many This Magazine readers could imagine a lesson in democracy that begins with just such a quotation.

Joel Westheimer is university research chair in democracy and education at the University of Ottawa and education columnist for CBC Radio’s Ottawa Morning and Ontario Today shows. This article is excerpted from his new critically-acclaimed book, What Kind of Citizen? Educating Our Children for the Common Good (www.whatkindofcitizen.org). You can follow him @joelwestheimer.