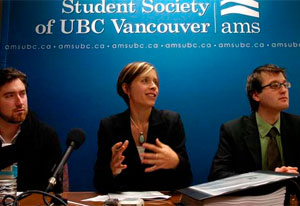 UBC’s student union, the Alma Mater Society (AMS), filed a complaint with the United Nations this week accusing Canada and B.C. of violating the 1976 International Covenant on Economic, Social and Cultural Rights. By signing this treaty, the AMS says, the Canadian government agreed to eventually make post-secondary education free and accessible to all. Article 13 (c) of the covenant states that “Higher education shall be made equally accessible to all, on the basis of capacity, by every appropriate means, and in particular by the progressive introduction of free education.”

Legal counsel of the AMS, Pivot lawyer Katrina Pace, filed the complaint with the backing of AMS president Blake Fredrick and UBC alumni Tristan Markle. “Not only has Canada and the province not met their commitments under the treaty, they’ve done the exact opposite,” says Pace in an interview with the Vancouver Sun. Pace argues that tuition fees have increased dramatically, particularly over the last five years, and that such financial barriers have made education inaccessible to students from low-income families.

Between 2002 and 2007 undergraduate fees at UBC doubled and graduate fees rose by 184%. According to AMS president Blake Frederick, the average student debt in B.C is $27,00, while the Canadian average is $24,000. Parcy in an AMS press release demands that the UN holds “the government accountable for their complete failure to live up to their commitment to accessible higher education.”

So while Canada’s government agreed to eventually make education free for all, thirty-three years later tuition-fees are the highest they have ever been. Though national student bodies like the CFS and individual student unions have campaigned to freeze and reduce tuition fees for years, no tangible results have been secured. Looks like maybe lobbying is out and lawsuits are in….