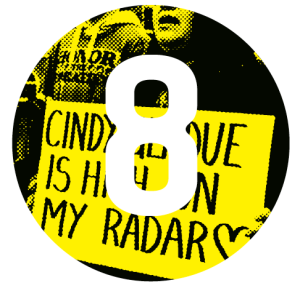 THE SUN HITS the back of my neck as I kneel over my poster board. It’s a hot summer afternoon in June and I’m colouring with markers, shared with the hands of girls decades my junior, helping with childcare at a sex worker solidarity rally. We’re at Toronto’s Allan Gardens, the day’s setting for lunch, refreshments, speakers, dance, and theatre. Similar events are happening across Canada today, the National Day of Action for Sex Workers’ Rights. It’s been a busy year for us— thanks to Bill C-36, the Protection of Communities and Exploited Persons Act, or what Conservative MP Stella Amber has more honestly called the “anti-prostitution” law. The bill was passed into law on November 4, 2014, and with it an intentional conflation between consensual sex work and exploitive human trafficking— implying validation for the regulation of the moral behaviours of sex workers, through a Conservative lens.

When the Conservative government rushed to pass the bill into law last year, Justice Minister Peter MacKay repeatedly told media outlets that the government considers sex workers as victims in need of saving. Workers are not breaking any laws by selling sex, however it is illegal for someone to purchase it. Prohibitions are also against activities involved in the sex trade, like a client communicating with the intention of buying sex or advertising the sale of someone else’s sex trade services.

It is also illegal for establishments like massage parlours or escort services to sell sex. It is legal to be a sex worker, thought it is near impossible to legally work. The government believes it’s simply trying to deter people from entering sex work. But Johns scared of legal punishment are more likely to be anxious and, as a result, aggressive. This means sex workers have less time to clearly communicate terms; there is not enough time to adequately screen. It doesn’t help that it’s also illegal for sex workers to work together—further lessening safety. A year old in November, the new legislation has already done a lot of damage, particularly amongst those it is supposedly trying to save.

After raiding 20 Ottawa massage and body rub parlours late last April, police detained 11 women. These women will be deported, and this trend is likely to continue. If our federal government is so interested in saving sex workers, why would they put them through the trauma of Canadian Border Services Agency (CBSA) inspections, before sending them back to possibly more abusive situations? “Migrant sex workers are often the target of robbery and assault. They are afraid to report to police or seek help because they do not want to be deported,” Elene Lam of Butterfly—Asian and Migrant Sex Workers Support Network told media in May. “Investigations under the guise of trafficking and police raids make the situation even worse. It makes people hide further underground, and makes them more vulnerable to violence and endangers their safety.”

Not that things are much safer in Stephen Harper’s Canada. Indigenous women in sex work operate in a nation where Indigenous people are over-represented in
prisons, and colonialism has normalized violence against Indigenous women. This oppression is only amplified when these women are in sex work, as is shown with the abductions and murders of Indigenous women, mostly sex workers, in Vancouver’s Downtown East Side. This violence is so frequent British Columbia’s Highway 16 is called the Highway of Tears. “Native women are not afforded the same level of agency as everyone else,” Indigenous feminists and activists Naomi Sayers and Sarah Hunt wrote last January for The Globe and Mail. “They are merely passive bodies waiting to be violated.” Sayers and Hunt continue to say they have no faith that the Canadian justice system will protect them, when it is clear that they have a better chance of being arrested.

Take the recent case of Cindy Gladue, which has set a dismal, unfortunate precedent for dehumanizing court evidence. An Indigenous woman and a sex worker, she was killed four years ago in an Edmonton motel room. When her body was found, authorities discovered an 11 cm wound in the 36-year-old mother’s vagina. It appears to be caused by a sharp object, but Bradley Barton, Gladue’s alleged murderer, told the courts that his fingers caused the wounds during rough consensual sex. The victim’s actual vagina was brought to court as evidence. It was a move many see as a complete disregard for her life, as well as the female body.

This was also done before a jury that had only two women on it and did not include a single Indigenous person. Barton was initially found not guilty. Thankfully, protests arose across the country. It was announced during these rallies on April 2 that Barton’s acquittal was appealed. Good news, but the message had already been sent: In Canada, Indigenous women, especially those working as sex workers, are not seen as human. As Harper told Peter Mansbridge during a December 2014 interview on CBC, these women are not high on the Conservative radar.

The government is pushing their morals onto others, to the extent of endangering lives. Maybe, they should have attended the solidarity rally in June where the voices of sex workers could be heard loudly, demanding rights, not rescue. Certainly, I would have shared my markers.