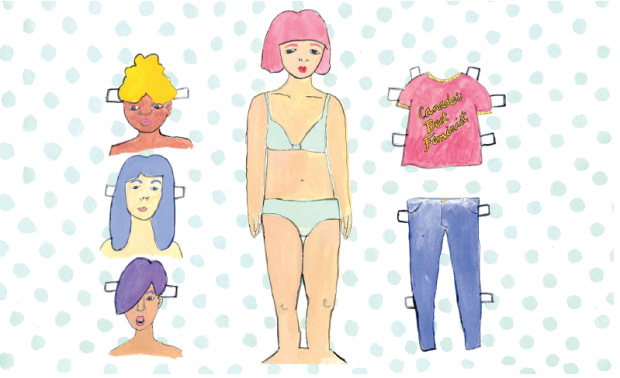 IF A FEMINIST FELLS CANADA’S PATRIARCHY and the media isn’t around to hear it, does it make a sound? Last year, Toronto Star columnist Heather Mallick was lambasted online for using the headline “Why Can’t Canada Build a Feminist?” to promote How to Build a Girl, the new book by renowned British feminist Caitlin Moran. A few days later, Maclean’s seemed to prove her point by publishing a cover story on the new faces of feminism—Malala Yousafzai, Tavi Gevinson, Emma Watson—most of which belonged to celebrities. The article’s sole Canadian, feminist video game critic Anita Sarkeesian, actually lives in the U.S. and only recently became a household name in the wake of Gamergate.

Though the Star changed its headline to “Why Can’t Canada Build a Famous Feminist?” Mallick’s original message stuck. Though fame underscored it, the takeaway seemed to be the mainstream invisibility of Canada’s feminists. What Mallick didn’t realize—unsurprisingly in an era in which feminism has been celebrified to the point that its non-celebrities are eclipsed—was that their invisibility is integral to their work. Canada’s feminists are invisible precisely because being visible limits what they can represent. And what the country’s current crop of feminists represents is everybody—you can’t be a so-called “somebody” and everybody else all at once.

“If there’s one trend I’m seeing among feminist activists, it’s that we generally do not want to be ‘the voice of our generation’ because one truth that we, as a movement, are plodding toward, is that whenever there is a woman considered the voice of her generation of feminists, she is generally white, generally middle or upper middle class, generally cis, often straight or straight-presenting,” says Stephanie Guthrie, founder of Women in Toronto Politics. “The reality is that her perspective will inevitably have blind spots as a result of those privileges.”

Canadian-based feminist organizations such as SlutWalk are conceived in crowd form. Even more recent campaigns, such as #AmINext, which raises awareness of murdered aboriginal women, only give the semblance of individuality—they are defined by a chorus. But dispersing Canada’s feminist mandate across the population—to all genders, races and age groups—can imply a dilution of the movement’s original intention. “I think sometimes the fact that the movement is generally more inclusive and more sex-positive than in the past can sometimes make second-wavers feel like we’ve gone ‘soft,’” says Anne Thériault, a feminist blogger from Toronto.

But today’s feminists aren’t soft—far from it.

A number of the Canadians who took issue with Mallick’s column argued that our country’s feminists are too busy working to vie for her attention. This is particularly true in Canada where, as feminist icon Lee Lakeman notes, funding is not as developed as it is in the U.S. “The swing to the right since 1995 has wiped out the last generation of more nationally- based women’s organizations,” she says, “and [the government] has not been forced to allow any new global waves to form.” Since conservative leader Stephen Harper came to power in 2006, the National Action Committee on the Status of Women, Canada’s largest national feminist organization, closed due to lack of funding (it now operates as an NGO). Canada’s Feminist Alliance for International Action and the Canadian Research Institute for the Advancement of Women also rely on donations. According to Lakeman, Canada’s desperation for funds causes its feminists to be “swamped” and “hidden from each other” at the grassroots level.

Canadian feminists are largely only visible to the people they help. They spend their days working directly with victims of domestic abuse, sexual assault, and various other forms of exigent exploitation—they are too preoccupied with the work to actually promote it. “They’re not celebrities, they’re not writers, they’re not famous people,” says Meghan Murphy, founder of the most-read feminist blog in Canada, Feminist Current. “That’s not the point of the work they’re doing.”

And their biggest workload comes in the form of Indigenous women’s rights. According to Statistics Canada, aboriginal women are three times more likely to face violence than non-aboriginal women, yet Harper slashed funding to the Sisters in Spirit initiative and the Aboriginal Healing Foundation and in August rejected a national inquiry into Canada’s murdered and missing aboriginal women, denying it was a “sociological phenomenon.” This compounds Canadian feminists’ invisibility—the fact that their biggest concern is women who are themselves invisible.

That these activists are still being ignored despite the increased awareness of feminism worldwide does not surprise Murphy. The issues they are addressing have been ignored for decades thanks to historical racism, not to mention abuse, addiction, and mental illness, all of which the government—and Canada as a whole—refuses to face. “The real issues of feminism are not very attractive issues,” Murphy says. “It’s not like Beyoncé.”

Canada does not have a Beyoncé. We don’t, in fact, have much of a celebrity culture in general—it’s not a natural fit for us to dress up feminism to make it more palatable or social media friendly even though that is what is currently being demanded of the movement. The internet has “democratized access to a platform,” says Guthrie. Authors of seminal feminist texts, such as Simone de Beauvoir and Gloria Steinem, the original thought leaders of feminism, have been replaced by bloggers, Tweeters, and YouTubers. “Increasingly,” Guthrie explains, “we are taking advantage of that access to a diversity of voices to listen, to learn, and to inform our activist approaches.”

But how do you get heard over the din? Increasingly individual feminists are branding themselves as distinct voices of the movement in order to stand out. It’s a culture that seems to agree less with Canadians than Americans, who come from a more individualistic society in which the self is favoured over the collective. “I don’t know that Canadian feminists would grow up thinking that they’re number one goal was to be Jessica Valenti or Gloria Steinem,” says Murphy. “Certainly when you start making feminism about personalities and individuals, it stops being representative of the work that’s being done.”

This skewed focus frustrates Cherry Smiley, a Thompson and Navajo Nations activist for Indigenous women and youth recipient of the 2013 Governor General’s Awards in Commemoration of the Persons Case. She thinks prioritizing individuals poses “a huge problem” for the movement. “I think my generation and younger have unfortunately embraced the idea of ‘feminisms’—that feminism can mean whatever you want it to be,” she says. “I think that idea has really watered-down feminism and has unfortunately embraced a very neoliberal ‘I’ as opposed to a collective ‘we,’ and it’s men and patriarchy that really benefit from these ‘me me me’ ideas.”

This misguided approach to feminism merely compounds the movement’s marginalisation by mainstream society, but that only makes Smiley work harder. “Feminism challenges patriarchy and colonialism, and it challenges racism and capitalism,” she says, “when we really begin ruffling feathers and pissing off the right people and truly challenging the status quo, that’s really when we’re on to something.” Hear that? That’s “we,” not “I.”