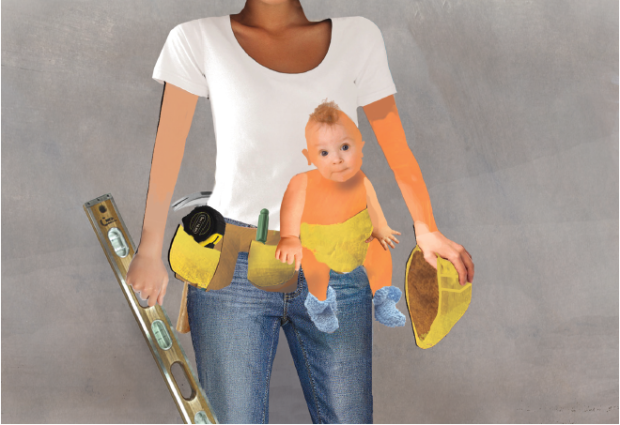 EMILY MLIECZKO HAS BEEN INVOLVED in the B.C.’s child care field since she was 19. Back then, she had no children of her own. “I just thought it would be a really nice thing to do,” she says. That was 22 years ago. Now, she has two sons, 19 and 16, both of whom grew up going to daycare. “I was a single parent who lived below the poverty level,” she says, “The support of my child care providers was one of the biggest assets I’ve ever had.”

Today, more than 75 percent of Canadian women with children under the age of six participate in the workforce—making child care an essential part of the labour puzzle. And yet, as Mlieczko says, Canada’s child care system is in crisis—and has been for the past four decades. High costs and few spaces in daycares across the country keep many mothers in poverty, at home or working several jobs, and federal and provincial governments have done little to address this. Affordable, accessible child care is a pressing feminist issue, but Canada is failing.

Mlieczko is now executive director of the Early Childhood Educators of B.C., and one of many fighting for more accessible child care. “Child care can cost more than post-secondary education,” she says. “There are some programs here in the lower mainland that charge close to $2,000 a month per child. That’s a lot of money.” Such fees aren’t unique to B.C. A recent report from the Canadian Centre for Policy Alternatives (CCPA) revealed some shocking facts about child care costs in Canada. The study, dubbed “The Parent Trap,” found that Toronto parents, for instance, spend an average of $1,324 per month on child care for their toddlers—often accounting for over a third of the mother’s income. This, too, is not uncommon. But think about it: that’s four months of labour to pay for a year of child care.

“The Parent Trap” is a stark on-paper reinforcement of something long known by child care advocates: the negative costs of child care mainly affect women. Child care costs are directly tied to women’s labour force participation, says David Macdonald, CCPA senior economist and co-author of the report. “The cost of child care has an impact on women’s labor force participation,” he adds, “but it doesn’t on men’s.” When child care costs are too high to afford, in other words, women, so much more often than men, stay home—even if they want to return to work. Others may be forced to work multiple jobs.

Even more simply put: child care costs keep women from working well. For example, 49 percent of women in Alberta cite child care as their reason for working parttime rather than full-time. These women, says Macdonald, are doing the same type of calculation he did in the report, which is: Does it make sense to go back to work? Would a woman pay more in child care fees than she would make working? Too often the answer to the latter question is “yes”—making the answer to the first a “no.”

Overwhelmingly, though, women want to work (a fact that should come to no surprise to anyone who isn’t living in the 1950s). The positive effects that affordable child care has on women in the workforce can be seen easily in Quebec. The province has been subsidizing early childhood education to $7 a day since 1997. As a result, child care costs are only six percent of a mother’s salary in Quebec City and Montreal, and only four percent of her salary in Gatineau. Women’s labour force participation in Quebec is eight to 12 percent higher than in provinces without affordable, accessible child care, according to a 2012 Université de Sherbrooke study. “It used to be that Quebec was significantly below the Canadian average in terms of labor force participation,” Macdonald says. “With the introduction of inexpensive child care, however, you see that Quebec has moved to slightly above the Canadian average.”

And yet, despite this success, few other provinces have broached subsidized child care. The federal government, for its part, has actually promoted policies that have the opposite effect. Take income splitting, for example. This allows families with children under 18 to split a household income of up to $50,000 for tax purposes, giving a tax benefit to the lower-earning spouse. Unfortunately, this is usually the mother—and, perhaps even more unfortunately, policies like this only reinforce the encouragement for her to stay home. As well, income splitting, a key part of 2014 Family Tax Cut, mostly helps higher income families. In fact, more than 85 percent of households won’t benefit from the plan, according to a 2014 report from the Caledon Institute of Social Policy. The CCPA calculated that the top five percent of families would gain more from this policy than the bottom 60 percent.

Feminists and child care advocates are not willing to accept such an outdated and unequal solution. Joined by progressives across the country, they are demanding a plan that will make child care more affordable and accessible for everyone. Mlieczko is one of those working to develop such a plan. With the Coalition of Child Care Advocates of B.C., she helped create the $10-a-day plan for B.C.—a concrete solution to tackle this growing problem. The proposal, first introduced in 2011, would subsidize child care in B.C. to $10 per day for full-time care, and $7 for part-time care. It would also make child care free for families with an annual income under $40,000.

While initial supporters were mainly other mothers and those in the progressive political sphere, the $10-a-day plan is now receiving increased support from the business community, whose members are finally starting to realize that not only is affordable child care good for women, it’s also good for the economy. “This will actually stimulate the growth of the economy,” says Mlieczko. When more parents are able to work, more jobs are created in the economy. It’s just basic math: Subsidized child care more than pays for itself in the aggregate, adds Macdonald, as the additional income tax gained is greater than the cost of the program.

Still, provincial governments are reticent. Under the current strategy of provincially-subsidized child care, provinces arguably don’t reap the benefits. Quebec, for example, spends most of the money to pay for child care, but the federal government sees most of the benefit in increased income tax. This weird balance can give provinces little incentive. To change this, argue advocates, Canada needs to treat child care like other social services; it needs a national child care plan. Just like with health care, say advocates, the federal government could work with the provinces and split the costs, leaving the provinces to implement the services.

Many hope the looming federal election will lead to more interest in a national child care policy. It certainly seems likely. The NDP has recently announced a $15-aday plan as part of its platform, though the Liberal plan remains unclear. Meanwhile, the Conservative government has increased the Universal Child Care Benefit. While this will provide parents with a few extra dollars, it won’t make child care more accessible or more affordable.

It’s now been 45 years since the Royal Commission on the Status of Women first recommended a national child-care program, and yet little has changed outside of Quebec. “It’s time for us to do this,” says Mlieczko. “We’ve seen other countries do this. We’ve seen other provinces do this. We’ve seen the success of Quebec and other provinces that are moving towards helping families, and I think every family in Canada deserves to have that kind of support.”