Come join us for the launch of our March/April feminist issue! 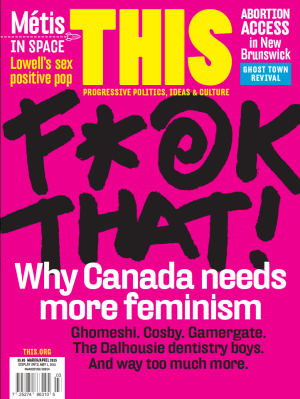 With this issue, we tell readers why we believe Canada needs more feminism—now. In it, we also give a big f*@k that to the popular culture that fostered Jian Ghomeshi, Bill Cosby, and the boys at Dalhousie’s Dentistry school; the one that cultivated mansplaining, manspreading, and street harassment; and the one that encourages apathy toward threats to abortion access, the pay gap, and our country’s Indigenous murdered and missing women.

To help kick off the issue, we’re hosting another This is Not a Ted Talk, featuring talks from fierce feminists on body positivity, consent, trans* rights, and more.

–Jill Andrew and Aisha Fairclough, the amazing women behind Fat in the City and the Body Confidence Canada Awards
–Kick-ass trans* rights activist Christin Milloy
–The awesome Sheila Sampath of Shameless magazine
–Plus a video feature from Project Slut