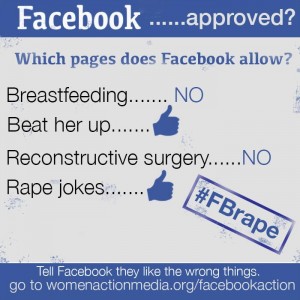 Last month a photo depicting a dead woman, head destroyed, body surrounded by her own blood with the caption “I like her for her brains,” would be A-OK with Facebook.   Women, Action and the Media (WAM) published Facebook’s response to a user who reported the image, which was pretty much along the lines of: the image doesn’t depict violence against someone or something, so there’s basically nothing it can do. That stops this monthly—thanks in large part to a mega campaign lead by WAM, Everyday Sexism Project and author Soraya Chemaly. More than 100 women’s rights and social justice groups signed an open letter to Facebook; petitions garnered 200,000 signatures. #FBrape exploded.

On May 28, the company released a statement on how hard it is for it find a balance between freedom of speech and community respect. In the past, the social media site has faced similar situations regarding Jewish, Muslim, and LGBT communities. If something doesn’t fall under Favebook’s definition of hate speech, it is deemed offensive or controversial, but not necessary to take down. Such logic can become frustrating when a picture of a woman breastfeeding, posted to her own account, can be taken down but a meme making light of an abused preschool child remains to circulate on timelines.

Together, groups sent Facebook advertisers 5,000 e-mails. Magnum Ice Cream may not want to be associated with murdering pregnant women, and Dove may not fancy being in the vicinity of a message saying to break the fingers of a deaf, mute woman so that she can’t report being raped.

Some advertisers kept quiet, but Facebook promises not to. In its letter, the company says its evaluation process of material will be more thorough and will involve the consultation of women’s advocates, effective immediately. They say a test program was already in the works to make creators of offensive content include their authentic identity, which, it theorizes, will make them more accountable for their work.

Of course, there are outcries over the internet saying this is a violation of free speech, and that if something isn’t illegal in the United States it shouldn’t be banned. But with over a billion active monthly users, the folks at Facebook are smart to consider their entire audience. Just because something isn’t illegal, doesn’t make it ethical. Laws are made based on the times. Both legal and ethical codes need to keep up with social media being part of every day life in order to stay relevant and continually used.