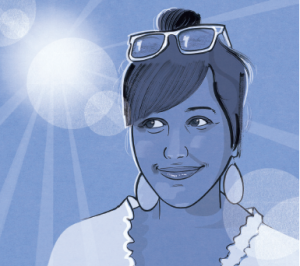 ON A GREY NOVEMBER DAY IN TORONTO, with the sun nowhere in sight and an irritating mix of rain and snow outside, Tamil-Canadian filmmaker and artist Nayani Thiyagarajah is in good spirits—despite being bogged down by a head cold. In between sniffles and blowing her nose, she laughs easily and talks about the sun, its role in her projects, and the communities she loves.

At 26, Thiyagarajah has already done quite a bit for her community. Besides filmmaking and writing, Thiyagarajah is a doula, yoga teacher, dancer, and also currently finishing up the interdisciplinary studies program at York University. If that weren’t enough to keep her busy, she’s also in the post-production phase of her documentary, Shadeism: Digging Deeper.

The feature-length film is a longer version of a short, created in 2011 with some classmates. As the title suggests, the film examines shadeism, a form of discrimination between lighter-skinned and darker-skinned members of the same community. It doesn’t only affect South Asians; it is pervasive within many racialized communities, including African, Caribbean, Latin American, Arabic, and East Asian ones. By 2018, it’s estimated the global skin-lightening industry will be worth U.S. $20-billion—thanks in large part to the maintained racial hierarchy (whiteness is better) in our society.

Shadeism, the short, starts off with a voiceover of Thiyagarajah talking about the sun and how women in South Asian culture are consciously and subconsciously told to hide from it because it darkens their skin—therefore supposedly making them less desirable. The original 20-minute short film struck a nerve among young women of colour. For many, what is often an uncomfortable and hushed conversation around skin tone discrimination, was, for the first time, presented in a frank and open manner as a group of friends in the film shared their experiences.

Racism is something everyone has heard of, says Thiyagarajah, but this idea of colorism or shadeism is not as discussed, especially in immigrant and refugee communities where other things such as putting food on the table or paying rent take priority. “Because we’re still dealing with so much racism, it’s really hard to talk about the internal stuff,” she says. “We don’t have the capacity to focus on the internal dynamics.”

Shadeism is not a new concept. American writer Alice Walker first coined the term colorism in a 1982 essay. Those in racialized or ethnic communities, and particularly women of colour, have long been aware of and oppressed by standards of beauty based on hue. It’s not easy to openly address this sort of discrimination because it requires a nuanced understanding of colonial history, complicated power dynamics, and the ways in which such beliefs are passed down from generation to generation.

The idea for the short came after a conversation Thiyagarajah had with her then three-year-old niece, who felt she wasn’t pretty enough because she was darker-skinned. Thiyagarajah was shocked to discover how race and standards of beauty had already seeped into a child’s mind.

Thiyagarajah was studying journalism at Ryerson University at the time and the short became a final project for her television documentary class. Initially, she says, her journalism instructor and classmates were skeptical about whether shadeism was even an issue, confused over what it was exactly—the program was mostly comprised of white Canadians who had little understanding of shadeism or how it impacted ethnic communities. It was at her and her team’s insistence that it became a short doc.

This was in 2009 and at the time Tamil demonstrations drawing attention to Sri Lanka’s violent 25-year-long civil war were taking place all over Toronto. Thiyagarajah noticed how mainstream media’s coverage painted protestors as supporters of the Tamil Tigers, even though not all of them were. She knew the reasons behind the demonstrations were much more complex than what was reported, and points to this failure to examine or even mention the country’s intricate history preceding the conflict as lazy reporting.

Mainstream media is not exactly known for its diversity or fair coverage and a hasty CNN-style news cycle leaves little room for more nuanced and balanced storytelling—let alone reporting from Tamils themselves. It was the desire to branch beyond the protests and present other stories plaguing her community that empowered Thiyagarajah to look at documentary-style storytelling as a tool for change and resistance work.

Thiyagarajah loves stories. She gushes about spending her childhood visiting a beloved uncle who worked at the HarperCollins’ factory and had an apartment filled with books. “He had like three copies of Goodnight Moon!’” giggles Thiyagarajah. As an adult, she always carries around a book. On the day I speak to her, she has a public library copy of Coolie Woman: The Odyssey of Indenture by Gaiutra Bahadur, a non-fiction read about Bahadur’s great-grandmother who travelled from India to Guiana to work as an indentured laborer, living a borderland life between freedom and slavery. Thiyagarajah, who is interested in history, migration and the South Asian diaspora, wanted to learn more about the experiences of Indo-Caribbean people as told through their own stories and perspectives.

Thiyagarajah is a fast-talker; anecdotes, ideas, book and film recommendations flow out in conversation. She’s constantly consuming media, interested in themes of diasporic resistance, immigration, and journey within a framework of community.

Her parents immigrated to Canada from Sri Lanka in 1985 and she was born and raised in Toronto’s Flemingdon Park, a multicultural neighbourhood in the city’s North York district. Coming from a supportive family instilled a strong sense of community and love, which led Thiyagarajah to become involved in community theatre and youth arts organizations including, ArtReach Toronto and The Remix Project.

“Nayani knows how to make connections between worlds. She occupies many different worlds and is able to connect her story with others’ stories as well, which is an amazing strength,” says friend Amanda Parris, co-founder of Lost Lyrics, an alternative education organization in the city. Thiyagarajah’s empathy enables her to create spaces to help people feel comfortable and open up, which serves her well as a documentarian and interviewer.

Thiyagarajah describes the process of filming Shadeism as a journey of growth, one that was far from a painless experience. Thiyagarajah admits she and her crew had little understanding of the film’s impact when she first posted the short on Vimeo. She says they were surprised to see how quickly it was shared, garnering almost 4,000 views in the first week.

In February 2011, the crew was invited to the Empowering Women of Color Conference at UC Berkley where Shadeism was screened along with a workshop. Thiyagarajah recalls that after the film people were crying. A Latina woman came up to Thiyagarajah but was unable to speak because she was so overwhelmed she was bawling.Thiyagarajah gave the stranger a hug, and at that point realized the heaviness of the film and her obligation and responsibility to her community—especially if she was going to crack open this can of worms.

While attitudes toward skin colour are not easily summarized, there were common threads as women from different backgrounds responded to Shadeism. Comments kept flooding in from all over. While most were supportive, there were also women challenging Thiyagarajah because of her own privileges, growing up lighter-skinned with straighter hair.

As a result, Thiyagarajah felt that Shadeism needed to be turned into a longer documentary featuring a multitude of perspectives. She invited more people, including First Nations women, to share their stories. She has also decided to include supporting elements to the film including a downloadable self-care toolkit, resources and questions to help viewers process the film and their own life experiences. The team also partnered with Lost Lyrics to develop a curriculum with the intention of using Shadeism: Digging Deeper as a teaching tool, complete with a resource package for teachers.

“It’s about [our] community,” says Thiyagarajah, who specifically wanted her friends and family to be in or involved in the feature. “It’s about documenting and remembering other people’s lived experiences. Our stories are more than stereotypes. We have beautiful, rich and difficult and challenging lives that are all part of us.