Weighing in with 57,184 votes, the most popular definition of the word “slut” on Urban Dictionary is “a woman with the morals of a man.” If we strip away the male punchline, hasn’t “slut” always meant that? A woman who pursues her own pleasure in spite of a pervasive double standard?

The SlutWalks are challenging that vocabulary of oppression. On April 3, hundreds of women took pride in their pleasure and walked through the streets of Toronto (note that they walked for all kinds of different reasons). Inspired by them, a march followed in Boston on May 7. Now self-proclaimed “sluts” and their allies are taking to the streets all over the world in response to the falsehood that sexual assault is linked with promiscuous attire.

It’s an old idea, and one we should be long rid of. There may be other definitions involving a woman’s barely-there clothing or willingness to cheat, but “slut” in its most powerful and oppressive form is inextricably linked with rape. 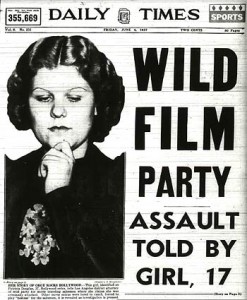 Patricia Douglas made headlines after she was raped by an MGM director.

Who exactly is Patricia Douglas?

In 1937, she was a 19-year-old dancer for Metro-Goldwyn-Mayer – you know, the film company with the iconic roaring lion. On May 5 of that year, she answered a call to a “film set” at an isolated ranch outside of Los Angeles. She and 119 other girls were required to wear cowgirl outfits. Patricia didn’t notice there were no movie cameras at the ranch. Present at what turned out to be an MGM sales convention party were nearly 300 salesmen, directors and producers. Throughout the night a film director pursued her, as they often did, asking her to teach him a popular dance. The director, David Ross, offered her champagne and whiskey, but Patricia had never tasted liquor so she refused. He and another patron forced the alcohol down her throat. When she ran outside to vomit, Ross followed her. He then violently raped her in a field near the barn.

Today we would hope such an act would be condemned and such a man would be brought to justice. But the 1930s were different. The word “rape” was rarely used. Instead the newspapers printed the word “ravished.” Women who were sexually assaulted didn’t often press charges. If they did, it was likely they would be publicly shamed. Only “sluts” had sex before marriage, whether or not they willed it.

As former MGM extra Peggy Montgomery said in a documentary I just watched about Patricia:

“I remember two words that I learned — one was ‘rape,’ which was an extreme disaster, and the other one that usually was in the same conversation was ‘tart’ – ‘well she’s a tart.’ … The whole vocabulary of ‘ bad woman’ – slut, tart, tramp – came up immediately if anybody mentioned, ‘she was raped.’”

It’s still a pervasive idea. If a girl sleeps around, she must have wanted it. If a girl is wearing suggestive clothes or makeup, as a Manitoba judge recently said, she must be asking for it. If on the other hand she doesn’t dress like a slut, as a Toronto police officer recently recommended, then she will prevent rape.

Patricia pressed charges against Ross. It was a brave move. Even today, attacking the credibility of a rape survivor is a valid means of undermining his or her testimony. Patricia was up against a financially powerful spin-machine. If MGM could show she had questionable morals – if she had casual sex, for example – the movie giant stood a better chance of winning the case. The movie studio circulated a form asking about the girl’s morals and whether she had been drinking on the night of the party. It aimed to establish that Patricia was a slut. If she was a slut, she couldn’t have been raped. But Douglas had been a virgin at the time, so MGM used another defense. “Look at her,” the prosecutor commanded: “who would want her?”

Rape was and still is linked with desire according to folk psychology. But this is an oppressive idea. Rape is all about power. Rapists perceive their “victims” as weak, which is why many sexual assault centres have shifted to calling them “survivors.” In a linguistic sense, this new word takes some semantic power away from rapists.

And what would happen if the word “slut” lost its power too? What if it bestowed strength rather than shame upon its subjects? Thanks in part to the SlutWalks and the debate they have launched, we may at last find out.