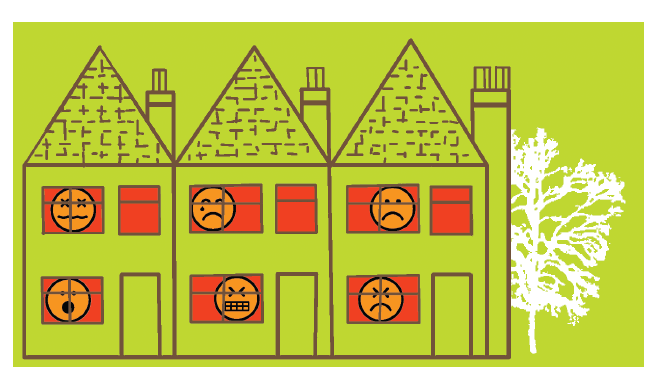 A call for co-operative housing reform

After spending the first 23 years of my life living in co-operative housing, I worry “co-operative” has become nothing more than a platitude used to paint a picture of true democracy. Even at the most local of levels, a functioning democracy needs supervision.

Over a quarter of a million Canadians are housed in over 2,000 co-operative housing projects across the country. Whether apartments, townhouses, or a combination of both, co-operatives are established as non-profit corporations, complete with committees and a board of directors, and are—theoretically, at least—run by residents. Residents become members by purchasing a small share in the co-operative and continue to pay monthly “housing charges,” a term used to differentiate the arrangement from “rent” in a typical landlord-tenant relationship.

Many co-ops were created as mixed-income communities in an attempt to avoid the ghettoization of the poor, and rely on individuals assuming a degree of personal responsibility. Members commit to putting in a small number of volunteer hours a month for the upkeep of their co-op, anything from mowing common grounds to conducting unit inspections. Every now and again, members get together and have meetings to elect a board, vote on an eviction, change the bylaws, or sort out any issues that arise, in a one-member-one-vote system.

But these defining features are by no means universal. Some co-ops hire a property manager or co-op co-ordinator and, in rare cases, co-ops are run by board members who do not actually live there. In others, rather than buying shares, members make loans, and some don’t require members to put in volunteer hours.

Crucially, there is no single regulatory body that oversees all housing co-ops. The sector is a muddle of acts, bylaws, and government and non-profit agencies.

The only national, umbrella co-op housing organization is the Co-operative Housing Federation of Canada. CHF Canada, itself a co-operative corporation, is primarily a lobbying group, focused on policy changes and acquiring funds from government on behalf of housing co-ops. There are regional associations for housing co-ops, and an agency that took over responsibilities from the Canadian Mortgage and Housing Corporation for federal co-ops in P.E.I., Ontario, Alberta and B.C. The other provinces and territories have their own schemes.

This confusion has created a sector which is barely understood by many in it, let alone those on the outside. As a result, the sector is largely left to its own devices, requests for financial records are denied.

Members who raise concerns with the lack of oversight and issues of governance in co-op housing are often given the runaround or subsequently targeted as dissidents. Ken Hummel, a co-op resident from Whitby, Ont., who for the last 15 years has tried to hold his housing co-op accountable by requesting information on audits, raising issues of favouritism, and filing complaints with police and government, is constantly told to find solutions internally.

“I had shared my concerns and complaints about [my co-op’s] governance and management problems with CHF Canada and CHF Canada referred me back to the co-op board of directors to find some resolution with issues,” writes Hummel in an email.

A member in Toronto was recently told by her co-op’s lawyer “to remove my digital footprint anywhere on the internet where I may have talked about co-ops suggesting I was disparaging them or receive a ‘notice to appear’ for consideration for eviction.” These kinds of actions create an environment of fear and submission in co-ops, something most outside the sector rarely understand.

Nicole Chaland, the Community Economic Development program director at Simon Fraser University, established a housing co-op in Victoria, B.C. a decade ago with strong ideals and high expectations. She envisioned a community-supported lifestyle, separate from the “paternalistic” system of a mainstream, managed housing provider. Though she didn’t live in the co-op she co-founded (a stipulation of a financial backer), Chaland saw the factionalism develop.

“The potential for built-in resentment is all there,” she says. “I think housing co-ops are particularly difficult because you actually have to cooperate with your neighbours and there is that opportunity for resentment to breed.”

Chaland also described the fiction she was sold early on that coops are cheaper to run due to lower operating costs. “Every single co-op is doing two things at the same time,” she adds, “you’re running a business and you’re nurturing an association of people. And that means the costs are higher.”

There are, naturally, some advantages to the co-op model. Through her research on housing co-ops, Catherine Leviten-Reid, assistant professor at the Shannon School of Business at Cape Breton University, discovered that members who actively participated benefited from “skills development, the development of self-confidence, social ties and the ability to influence the housing in which one lives.” There is no doubt that many housing co-ops do work well. But there are too many that don’t.

Victims of abuse, harassment, and fraud are left naked before their management, with nowhere to turn for help. By design, many co-op members are economically vulnerable, unable to afford representation or represent themselves.

Co-op housing represents so many appealing concepts, which is why it’s hard to find anybody who doesn’t support it on principle. A recent bill to amend the co-op legislation in Ontario received all-party support. Co-ops symbolize participatory democracy, social justice, redistribution of wealth, DIY—so many progressive movements rolled into one. They’ve maintained the impression they are bastions of true democracy, a place for the people by the people, while the number of people practicing these ideals has become smaller and smaller.

“That’s a small radical subset of the housing co-op movement in Canada,” says Chaland. “This isn’t really part of our culture. We teach competition. We teach persuasiveness, we teach winners and losers. And these things are at odds with co-op principles.”

JOSH HAWLEY is a writer, editor, and musician living in Montreal. He studied journalism at Concordia University