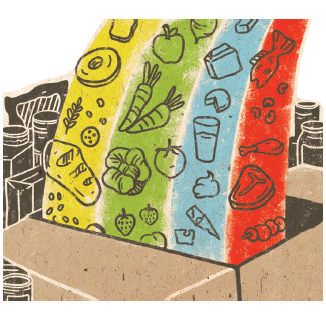 Controversy erupted in August after Ottawa’s Parkdale Food Centre announced it would stop accepting junk food, such as Kraft Dinner and hot dogs, effective immediately. Some wholeheartedly agreed with the centre’s stand; others virulently opposed to new restriction. Those in favour felt, like Karen Secord, Parkdale’s co-ordinator, that food bank users’ health is worth as much as anyone’s, and Parkdale should strive to provide healthy food. Those opposed to the move, however, asked why the food bank felt it had the authority to restrict people’s diet choices. Some former food bank users shared the opinion hotdogs were better than nothing, while others pointed out they didn’t have refrigeration to store so-called healthier food. Yet, for or against, and whether the commentary was rooted in personal experience, politics or stereotypes, the public conversation revealed something essential: our own attitudes toward those using food banks.

Parkdale isn’t the first or only food bank to restrict food donations. Founded more than 30 years ago, Toronto’s The Stop Community Food Centre, has made it the centre’s policy to only accept healthy food—a policy created after the community members it serves told the organization they wanted it that way. “We started as a food bank in the traditional sense, and over time our community members told us the food that we were providing was not enough,” says Kathe Rogers, The Stop’s communications manager. “It was not healthy enough, it was not meeting their dietary needs. And so over time, we became a healthy food bank. Because that is what people really need when they’re struggling. When they’re out there on low incomes, or they’re living in poverty, these are the items that are beyond their means.”

“I often joke that the folks at the food bank in The Stop have, without question,  more organic food than my kids do,” adds executive director Rachel Gray. “And that’s one of the things we think is really important.” Her philosophy is people can’t get or be healthy without healthy food. Heavily processed food loaded with sugar, salt or fat is unhealthy no matter how you slice it, she adds. Gray says people can debate whether it’s nice to have a box of macaroni and cheese, but if that’s all a person has to eat it becomes problematic: there’s no choice; it may be culturally inappropriate or irrelevant; and it’s not a balanced diet. “It’s not the way to good health,” she adds. “And if we’re not supporting people to get healthy, what are we achieving?”

Ideas such as “any type of food helps”—which goes hand-in-hand with the assumption that low-income people should be grateful for whatever they get—can belie fundamental assumptions about people’s worth. Stigma that blames the economically disadvantaged for their situation is often included in conversations about food banks, as are the stereotypes “poor people don’t like to cook” and only like junk food. A report from Washington, DC-based organization Cooking Matters, found that while assumptions about the eating habits of low-income Americans were rampant, the reality is poor families most often cook dinner at home, mostly from scratch, and are highly interested in making healthy meals. The stumbling block for many families is the price. An article by Jesse Bauman entitled “Poor People Can’t Cook and Other Myths,” published on Food Secure Canada’s website, reflects similar data for Canadians. In a small survey that asked low-income people about their food skills, Bauman found those who have to carefully budget a meal plan simply can’t afford to eat out. Instead, he writes, people “have developed many of the skills necessary to make the best of their situation.”

Unfortunately, it doesn’t look like the food bank discussion will go away anytime soon. Every month, more than 830,000 Canadians access a food bank, according to HungerCount 2013, a report created by Food Banks Canada. Of these 37 percent are children. And, despite being once envisioned as a short-term solution to economic crisis in the ’80s, food bank usage is on the rise. “Within the food bank network,” HungerCount 2013 reports, “crisis has become the norm. Canadians continue to give generously, and food banks continue to stock, give, and re-stock.” While Gray would like to see food banks become obsolete—The Stop advocates for increases to social assistance and minimum wage that would put solid safety nets in place—she agrees they’re double-edged swords. “Food banks are still around because people are still hungry,” says Gray. “Our food bank is busy and thriving because food banks don’t work as a means of addressing poverty and hunger.”