Just this morning I was reading Lee Maracle’s Ravensong. In it, there’s a part where a 17-year-old indigenous girl wasn’t sure how to tell a white boy she wasn’t interested: “White boys always have a response which is designed to save their pride by assaulting yours.” And then I found Bye Felipe.

Started by former Ms. Magazine intern Alexandra Tweten, the Instagram page is a place where women can call out rejected men who turn hostile by submitting screenshots of conversations. Convos like this: 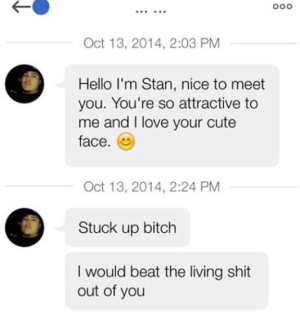 Unfortunately, Stan is not alone. There is, however, a fortunate side to these women not being alone. Tweten shares her reasons for creating the account on the Ms. Blog: “My main reasons for creating the account were: A) Commiserating with other women (you can’t be a woman online and not get creepy messages from men); B) Letting men know what it’s like to be a woman online (it’s not all cupcakes and rainbows!); and C) To expose the problematic entitlement some men feel they need to exert over women in general.”

The account was opened mid-October and as of now has 150,543 followers and 47 posts.

You may have heard the comment that everyone is brave behind their computers, but as social media has become a primary form of social interactions this behaviour has to not only be called out, but to be stopped entirely. This is gender-based harassment. 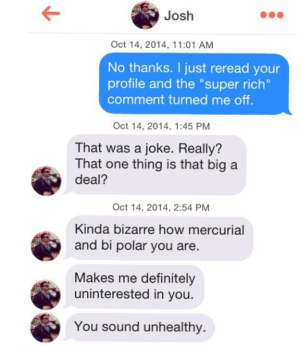 Lane Florhseim writes of her online dating experience and using the elitist Sparkology. The site requires a man to have a degree from a list of approved college to sign up, and is described by its creator, Alex Furmansky, as a place where the guy with “the wine and flowers wins.”

Let’s pause there for a second: He wins. Women aren’t people, he seems to be saying, but trophies.

Since men need to pay $3 to send a woman a message, they feel more entitled to a response. Florhseim says the site encourages this sense of entitlement, as it sent her reminder messages saying, “Remember, he used one of his limited and pricey Sparks to send this special message specifically to you. We are sure he was nervous to hit the send button—so please be kind and check him out!”

As Florhseim says, the nice guy syndrome rules Sparkology. But this entitlement isn’t reserved for the elite guys with flowers and wine.

A Reddit user shares his story of pretending to be a girl, with the initial intent of proving online dating is easier for girls, “I thought it would be some fun thing, something where I would do it and worse case scenario say ‘lol I was a guy I trolled you lulz’ etc. but within a 2 hour span it got me really down and I was feeling really uncomfortable with everything.” He couldn’t handle this modern hetero-dating scene, as a female, for more than two hours. 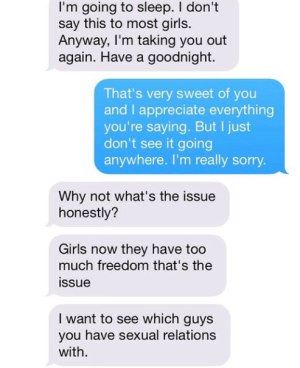 Bye Felipe illustrates the “everyone is brave behind their computer” statement perfectly, as it does male entitlement. Some of these women haven’t had the chance to even read—never mind respond to—to these guys’ first messages before the exchange turns ugly. Hopefully, as these guys are called out, it will be obvious that this behaviour is not accepted, not just by women, but by society. In the meantime, the account can create a sense of solidarity, and a chance for these women to post their witty responses—which don’t have anything to do with the other person being fat, unlike most of these guys’ temper tantrums.