Nice guys always finish last. Whenever they treat a woman like a friend, it doesn’t end up in sex! Sometimes, the guy will buy flowers and gifts for the woman, despite the fact she has expressed zero interest romantically, and again—no sex! This woman often becomes re-classified as an ice queen, a bitch, a friend zoner—even when, in reality, she may feel betrayed or confused, having thought her friend was actually, well, her friend. And the guy—who, to recap is upset because he couldn’t buy sex from a woman through acting like a decent friend—is justified in saying: “It is because I am nice. Girls only like jerks.” This isn’t an issue of outright rejection, a guy has immediately expressed a desire to date—we’ve all been there. This is a wolf in sheep’s clothing type deal, where acting like a friend is seen as putting in the time to obtain what is rightfully his. 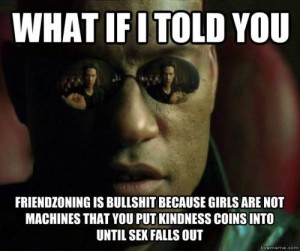 This sense of entitlement is dangerous. It enforces the all-to-popular notion that a woman’s purpose is found solely in her body and how she lets others control it. Relationships based on this type of mind-set are doomed to fail, but also build a rocky foundation for future relationships, screwing up social circles everywhere.

“Girls gave their affection and sex and love to other men, but never to me … it’s not fair.” This is a sentiment heard in some gatherings of guys, whining about how even though they are so wonderful girls don’t like them because girls are stupid—a.k.a can’t force attraction to a dude just because he wants them to. We also see this sentiment echoed in countless Hollywood romcoms, and seen on many a “witty” meme. And another place, too: the video of “supreme gentlemen” Elliot Rodger, the MRA who killed six people in California this past weekend because, as he put it, girls are sluts for not having sex with him.

It may sound extreme to compare the average nice guy griping to a murderer and yet the message being sent is the same. Sociologist Michael Kimmel writes in his book, Angry White Men, “Men are angry and restless because of what they experience as the erosion of their ‘rightful’ privilege, and they have convenient targets for their rage … They’re angry at women, who, they argue, are beautiful, sexy, and sexually available—yet turn them down with contemptuous sneers.”

In other words, hetero males are being taught that as the superior sex, females owe them. And females are taught to be passive, accommodating people pleasers. Such a culture justifies the notion that if a guy is nice to a girl, and she doesn’t pay up, she is taking advantage of him. This way, the male is the victim and doesn’t need to admit to the fact that she isn’t attracted to him. The fact that women have a choice in whom they have sex with isn’t even considered. This cycle continues and sex turns into a right and not a pleasurable experience shared between consenting parties. This same entitlement mentality is often used to justify rape, as well, and it starts at elementary schools where stuff like “friend zone” is a real thing.

“The Friend Zone is a bullshit, misogynistic, make-believe land Nice Guys have come up with to demonize women for not wanting to date them,” writes Alisse Desrosiers in Feminspire. “They use it as an excuse to ignore the fact that there are actual reasons behind their decision to not pursue a relationship or have sex with this guy. You know, like not being physically attracted to them. Or not being able to connect with them. Or seeing through their crap and realizing that the only reason these guys are even friends with them in the first place is so they can get laid.”

Actual good people are the way they are for the sake of pure goodness, not to “get some.”