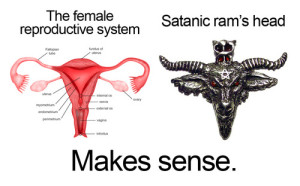 Now but a meme, this was originally seen as fact

So long ago it was proven that women are evil because, duh, uteruses have horns.

This week, I am reading An Introduction to Women’s Studies Gender In A Transnational World by Inderpal Grewal and Caren Kaplan for Dr. Kristine Klement’s Introduction to Gender and Women’s Studies class at York University. We are focusing on how science may just be as culturally affected as the rest of us, especially when it comes to gender: “Many people think that biology answers [what counts as difference] once and for all,” reads the first essay, “Social and Historical Constructions of Gender.” “But science (including biology) has a history.”

These influences affect different aspects of gender and sexuality. As Dr. Klement points out, “Binary thinking affects science.” Because we are so dead set on sticking with this male/female gender dichotomy we are able to use science to justify prejudice against trans* people, or decide what gender role a child will be expected to live up to—something many people and organizations, including the Intersex Society of North America would like to see stop. “Intersexuality is primarily a problem of stigma and trauma, not gender,” reads the society’s website, for example. “Parents’ distress must not be treated by surgery on the child.”

I’m not saying all science is terrible—it’s a pretty broad profession and, of course, used toward wonderful advancements. But scientists are still people coming from an oppressive culture, with their own ideas and—even though some may be subconscious—their own prejudices. And there’s quite the history of how it has been used to justify the dehumanization of women, especially working class women. Take, for instance, the  early 1900s case of Margaret Sanger.

Sanger, is considered the mother of the birth control movement. Earlier this summer, The Washington Times published an article about Sanger’s pushing of the eugenics movement. Sanger wanted birth control to be used for “respectable” married women, not working class women—despite her own working class background. “Her views and those of her peers in the movement contributed to compulsory sterilization laws in 30 U.S. states,” writes Arina Grossu in The Washington Times. “That resulted in more than 60,000 sterilizations of vulnerable people, including people she considered ‘feeble-minded,’ ‘idiots’ and ‘morons.’”

Almost a hundred years before Sanger was Paul Broca, known for measuring skulls, or, crainometry. Broca also thought we were a bunch of idiots, and wanted science to  prove this. He determined women’s heads were smaller than men’s, and thus women were more stupid. Stephen Law writes about it in “Women’s Brains,” quoting who he referred to as “a black sheep in Broca’s fold,” L. Manouvrier: “Women displayed their talents and their diplomas. The also invoked philosophical authorities. But they were opposed by numbers … The theologians had asked if women had a soul. Several centuries later, some scientists were ready to refuse them a human intelligence.”

Also, on the list of “bad” things women’s bodies do: shedding unnecessary garbage during menstruation while men are being awesome producing all sorts of sperm (“The Egg and the Sperm” by Emily Martin.) “In analyzing male/female differences these scientists peer through the prism of everyday culture, using the colours so separated to highlight their questions, design their experiments, and interpret their results,” writes Anne Fausto-Sterling in ‘The Biological Connect.’ “More often than not their hidden agendas, non-conscious and thus unarticulated, bear strong resemblances to broader social agendas.”

Interestingly enough, at my last science lab, part of my assignment was to help a fictional lady, Jezebel (named after the Bible’s bad girl), figure out the father of her baby.