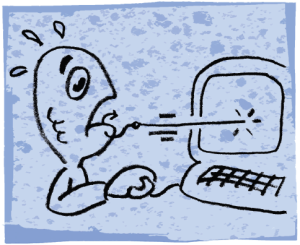 Online media has monetized humanity’s rubbernecking reflex like never before. “Clickbait,” as defined by Urban Dictionary, is an “eye-catching link on a website which encourages people to read on. It is often paid for by the advertiser or generates income on the number of clicks.” Clickbait is now a widespread phenomenon. These highly clickable links to videos, articles or images thrive on the lowest forms of controversy and intrigue, attracting an audience in the same manner as a bar fight or a car accident.

Back in September of 2013, a viral image spread across the internet: Miley Cyrus in a leather bikini, with knobby pigtails and lascivious red lips, twerking into Robin Thicke’s black-and-white Beetlejuice pants. I saw it paired with an ostensibly feminist headline drubbing the performer. Eager to hear what new lows Cyrus had sunk to, I clicked.

Days later, it seemed, I emerged from the haze of Cyrusbait now repulsed by the image, much the way you might react to the sight of tequila the morning after a binge. Had I learned anything new about the exploitation of female performers? No, I’d gorged on sugary listicles like “22 Things That Miley Cyrus Looked Like at the 2013 VMAs.” Had I ruminated on contemporary approaches to feminism? No, I’d watched as discussion devolved into mud-slinging between Miley Cyrus, Sinead O’Connor, and Amanda Palmer. And I was primed for the new Miley Cyrus video “Wrecking Ball” when it came out—with artful timing—just a few days after the controversy. I clicked, yet again, along with millions of other viewers.

Some of these stories touch on important issues—the pervasive power of straight white men in the literary world, dangerously irresponsible civil servants—but mainly it’s a bunch of people doing stupid shit. Why are we giving them so much attention?

The answer, of course, is money. Websites like BuzzFeed, Upworthy, and Huffington Post are figuring out the best way to pair journalism with ads that are designed so that you can barely distinguish the two. BuzzFeed uses an algorithm to determine what people click on, and then marries successful campaigns with “BuzzFeed Partners” like Virgin Mobile. New York magazine estimates this new “advertorial” approach to journalism nets BuzzFeed around $40 million a year in ad revenue (BuzzFeed does not release official numbers). Jonah Perretti, BuzzFeed’s founder, described the relationship between his company and Facebook by saying, “They own the railroad tracks, we drive the trains.”

Upworthy employs a team to run randomized tests and determine the most clickable headlines. The formulaic nature of these headlines has spawned imitators and parodies, but remains shockingly effective. Before the site was two years old, it had 22 million visitors a month and had raised $8 million from investors—cash that these investors want to see returned. Naturally, Upworthy is trying out its own forays in sponsored stories. Unlike BuzzFeed, Upworthy produces no original content at all; it functions through aggregation and reframing, and as of March, partnerships with hard-news sites like ProPublica. Huffington Post uses the same mixed editorial/advertorial approach—also called “native advertising”—as Upworthy and BuzzFeed, and was sold to AOL for $300 million in cash.

We may think we’re getting a great deal with all this free and fun clickbait, but we’re paying for it dearly in other ways. Tech start-ups and advertising companies are colluding to turn us into a bunch of rats in Skinner boxes, primed to click for the next sugary reward, while they make big bucks off “sponsored content” stories about the new Xbox or Chevy Corvette. In a world of narcissistic articles like, “23 Signs You’re Secretly an Introvert,” hard-hitting journalism becomes an endangered species. War reporters in Aleppo can’t afford health insurance and are paid $70 per article—barely enough for a night’s room and board in the war-torn region.

You can fight back by doing one simple thing: think before you click. Don’t click or share what will only make you or others uselessly angry. (No more Margaret Wente columns—we only have ourselves to blame for her continued career.) You can employ online tools, like Rather (GetRather.com), which allow you to filter out clickbait generators and stories. You can follow Twitter feeds like @Huffpospoilers and @Upworthyspoilers which skewer leading tweets and reveal the banal answers behind mysterious headlines. You can support quality journalism. You can choose not to stop and gawk at the spectacle.

Laura Trethewey lives in Vancouver, where she writes fiction and non-fiction for Geist, the National Post and other publications. Her work has been nominated for a National Magazine Award and a Western Magazine Award.