Chanel No. 5 has long been considered the classic woman’s fragrance. She who wears the haute couture brand’s most famous perfume is effortless in her sophistication, beauty, and elegance. Becoming the face of a Chanel No. 5, I can only imagine, is a compliment above all others; to be considered for the job is, in essence, to be considered iconic. Past celebrities to pose for Chanel No. 5 ads include Marilyn Monroe, Audrey Tatou, Nicole Kidman, and Catherine Deneuve. And the newest famous face to join the ranks of ultimate beauty? 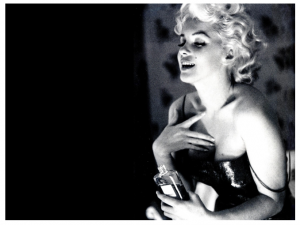 Now, don’t get me wrong—I think the idea of making a man the face of a women’s perfume (Pitt is the first male to be the face of the scent, though the brand has used male narrators in its ads before) has merit; not only does it draw our attention for its sheer surprise value, but it allows us to think outside the typical boundaries of advertising for a specific gender, looking at how we view femininity and use one sex to draw in another. Its power is twofold, attracting women (because who doesn’t want Brad Pitt leaning in and telling them they smell irresistible?), while at the same time reeling in the men (because anything that makes Brad Pitt go weak in the knees ought to make other men do so, too…right?).

All that being said, the ad itself came out this past Monday, Oct. 15, and it’s, well, pretty bad.

First, there were three teasers (yes, commercials for a commercial) that show a still photo of longhaired Pitt looking away from the camera, which came out a few days before the full ad. Titled, “Where?” “Why?” and “Mystery?” each one features a voiceover by the 48-year-old actor sultrily asking questions like, “Are you going somewhere? [Pause] Where?” and “Do you feel lucky? [Pause] Why?” If those weren’t curious enough, though, the full 30-second commercial sure is.

To be fair, Chanel’s ads have always been a little whimsical, tapping into the female fantasy of glamour, ageless beauty, and timelessness. But this Pitt one takes things to a new level.

The black-and-white commercial, titled, “There You Are,” features Mr. Angelina Jolie dressed in a simple long sleeved shirt with his hair down to his shoulders and his facial hair artfully scruffy (as the Huffington Post Canada reported, he “looks more like he wandered out of a dive bar in Brooklyn than the chiseled stud we saw years ago”). He speaks to the camera (nay, to you—just you—special, brilliant, smells amazing you) saying thinks like, “Every journey ends, but we go on. The world turns, and we turn with it. Plans disappear, dreams take over.” What?

I’m not going to go as extreme as to say that this ad is offensive (do you really think women are going to fall for this, Chanel?), because it’s really not; it’s more amusing than anything. So introspective and deep in its tone, the commercial makes it hard to take Pitt seriously. While I want to believe that he (in theory, of course) likes the way I smell in Chanel No. 5, I come away with less butterflies and more giggles (and that’s not even considering his haircut).

Pitt reportedly earned $7 million to work on the campaign, so he basically earned $7 million to speak nonsense into a camera (and many are indeed citing the script as nonsense). The brand is clearly banking on selling Pitt’s face rather than his words. And that’s fine, I guess, if the marketing team doesn’t really care about producing anything of substance.

I don’t necessarily think this ad will turn off current Chanel No. 5 users from continuing to buy the perfume; but I don’t think it will attract any new takers, either. Frankly I expected a little more from the brand. Using a male face to represent the classic perfume had so much potential to excite, to surprise, to awaken women, reintroducing them to a brand they thought they knew. Instead, at least personally, all I am is confused.