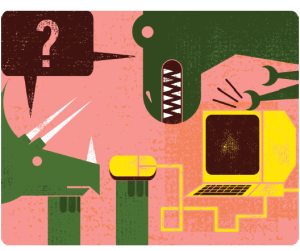 When former Public Safety Minister Vic Toews stood in the House of Commons and proclaimed that anyone who didn’t support the government’s new Lawful Access legislation was standing with the child pornographers, the Internet collectively decided he was being ridiculous. When MP Dean Del Mastro compared ripping a CD to buying socks and then stealing shoes (because, you know, feet), the Internet collectively decided he was being profoundly stupid.

And it’s not that Toews is a ridiculous guy or that Del Mastro is actually stupid, but there’s a disconnect between the digital policies they’re advocating and the way people actually use digital technology. Wanting privacy doesn’t mean you support molesting children and converting your music collection doesn’t make you a thief. Obviously.

This isn’t strictly an attack on the current Conservative government. Previous governments didn’t really have to deal with these issues. Consider how far we’ve come since Stephen Harper first came to power in 2006, before the iPhone was a thing or the words “big” and “data” had collided in a sentence. But newness doesn’t excuse the tenuous grasp elected officials like Toews and Del Mastro have on both the technical and cultural aspects of modern technology. Either they aren’t the right people to be working on these policies or, more frightening, it’s a problem that permeates the entire House of Commons—a group whose average age is 53, with only a handful of millennials (the only generation with the opportunity to have internalized so many digital issues) who all belong to the minority opposition.

Whether it’s age or politics, the sitting government has already repeatedly whiffed on digital policy. Most disappointing was when Industry Minister James Moore introduced Digital Canada 150 in April, a strategy document designed to put digital priorities front and centre, but was  panned for lacking any sort of real vision or concrete plans (Michael Geist called it a strategy document lacking much in way of actual strategy). It was a document that took a staggering four years to produce, which means much of the data used pre-dates the iPad and Netflix streaming and a lot of other things we take for granted today.

The shortcomings of Digital Canada 150 became apparent with subsequent legislation. Bill C-13, officially the Protecting Canadians from Online Crime Act, was supposed to be a huge step toward combatting cyberbullying. Unfortunately, it also includes a pile of provisions that have nothing to do with cyberbullying, and has been strongly criticized for allowing investigative overreach without judicial oversight, while stripping away the privacy protections many Canadians assume they have. It’s a wide-reaching bill that was heavily scrutinized by a small group of people who enjoy heavily scrutinizing these things, but was largely sold to the general public as something that would save our kids from the scourge of bullies on the Internet. In short, C-13 has never received the public discussion it deserves and, while not straight out of 1984, does have an Orwellian feel to it.

More curious than sinister was Bill C-23, the much discussed Fair Elections Act. In a world where we can pay bills, buy groceries, and file taxes online, C-23 offers substantial electoral reform without ever broaching the subject of online voting. In fact, the infrastructure needed to make online voting a reality isn’t really on anyone’s roadmap, which is crazy if you really think about it. (This isn’t just a Canadian problem and, oddly, it’s Estonia that leads the way with a comprehensive digital identification program that’s required at every level of government.)

Technology touches everything—justice, privacy, resources, copyright, access to information, entertainment, democracy itself—so robust and complex digital policies are necessary. It’s not just enough that our politicians understand this stuff, which they mostly don’t (if you don’t believe me, you haven’t listened to an MP try to clearly and accurately define “metadata” or “net neutrality”), they need to ensure we understand it, too. Balance on these issues is important: balance between companies and consumers, law enforcement and citizens, government and taxpayers. But keep in mind that half of all of those equations is people—we are the consumers and citizens and taxpayers. And, generally speaking, when an issue isn’t being widely discussed and properly understood, it’s the people that are getting screwed.