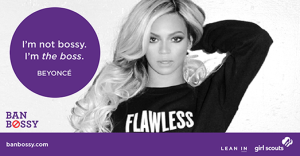 Feminism is getting sort of cool. Kids’ movies are passing the Bechdel test, Beyonce is writing about gender inequality and fashion designers are citing powerful women as their muse. The sincerity of all of this is questionable, but is the shallowness worth hearing those in the spotlight using the feminist title positively instead of hiding in the safe humanist zone?

“Maybe feminism feeling like it’s in style comes as a result of increased awareness,” feminist-identifying singer Lorde writes on her Tumblr earlier this year. “Which I think is a good thing regardless of whether or not it feels ‘trendy’ (which you’re right is rl weird). I definitely don’t think feminism is going to ~go out~ or anything, I feel like we’re past that now.”

When girls are looking at Beyonce they are seeing a woman who talks about body love, being a boss and being a feminist. Her January 2014 essay, Gender Equality is A Myth!, is published in The Shriver Report. She is also criticized for romanticizing domestic violence and lightening her skin. Movies Brave and Frozen have heroines worthy of Netflix category Strong Female Lead, yet these same heroines are also part of the cringe worthy Disney Princess line, next to gals idolized for their looks and ability to marry rich. We hear of celebrity ladies like Lady Gaga called feminist (though she says otherwise, kind of), work with R Kelly and Terry Richardson—two men who are famously facing their own sex abuse allegations.

And like how grunge and punk rock lead to lower-class fashions hitting high-end runways, the fashion world—which profits from the insecurities of women—is making feminist chic: “There is this debate about women again and I want to interpret it,” Miuccia Prada said earlier this year at her Spring/Summer 2014 show. “My instrument is fashion. I had this idea that if you wear clothes so exaggerated and out there, people will look, and then they will listen.”

“On the most surface level, it must be noted that increased awareness is a good thing,” Jezebel contributor Callie Beusman writes. “Why should we care what, exactly, gets someone interested in feminist thinking, as long as they arrive there eventually?” In other words, if being a feminist is now cool, then that should be a good thing.

Much of pop culture’s adoptions of feminism can be seen as necessary baby steps—I dig that Beyonce is proud of being the boss. Still, in a world where media rules all and raising awareness only goes so far, I really want to see a plunge with sincere action. We’ll need this to make social justice in the world of gender last—as opposed to something that was once “the new black” and has since become so last season.